Seven foods from across the rainbow that you should eat

With so many fruits and vegetables coming into season across the country, now is a great time to give vegetarian and vegan meals a try. And if you're going to do that, picking up Color Me Vegan by cookbook author and columnist Colleen Patrick-Goudreau is a great place to start. Patrick-Goudreau's latest cookbook is full of healthy, delicious recipes that cover the rainbow, and consequently provide a wide variety of nutrients: from orange peppers for beta carotene to green kale for chlorophyll and red tomatoes for lycopene, you'll be hard-pressed to find a piece of produce that isn't represented here. 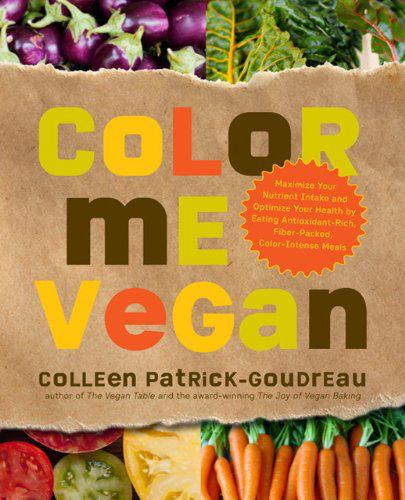 With so many fruits and vegetables coming into season across the country, now is a great time to give vegetarian and vegan meals a try. And if you’re going to do that, picking up Color Me Vegan by cookbook author and columnist Colleen Patrick-Goudreau is a great place to start. Patrick-Goudreau’s latest cookbook is full of healthy, delicious recipes that cover the rainbow, and consequently provide a wide variety of nutrients: from orange peppers for beta carotene to green kale for chlorophyll and red tomatoes for lycopene, you’ll be hard-pressed to find a piece of produce that isn’t represented here.

Following Patrick-Goudreau’s lead, here’s a fruit or vegetable from every colour of the rainbow (and white!) to include in your diet, and why you should eat it:

Patrick-Goudreau’s work covers the gamut of vegan cooking, from this book to The Joy of Vegan Baking and her new book of recipes and other food for thought, Vegan’s Daily Companion. She also does the audio podcast “Vegetarian Food for Thought” and on June 11 she’ll be speaking in Toronto for the Toronto Vegetarian Association’s Compassion Week. She answered a few questions for us about plant-based eating and what she’s working on next.

Q: You grew up eating a typical diet, which included animal products like meat and dairy. What led you to move to a plant-based diet?

A: It’s true; I grew up eating every kind of animal – anything that walked, swam, or flew. My father owned ice cream stores and would bring home tubs of ice cream home to store in our separate ice cream freezer. At the same time, I – like most children – had a deep sense of compassion for animals, suffered when they suffered, and intervened when I was able. My parents and other adults supported this compassion, but they also taught me to compartmentalize it. I was taught that some animals were worthy of my compassion (the stray dogs and cats or wildlife I helped) and some animals were “here for us” and thus deserving of our compassion only to a point. And these were the same animals all over my wallpaper, my pajamas, my childhood books and games, my bedspread, my favorite television shows and movies: lambs, calves, pigs, ducks, geese, turkeys, and chickens.

I could have gone about my whole life staying desensitized, but luckily I read John Robbins’ Diet for a New America when I was 19, which started me on a path to learn everything I could about the exploitation of animals for human consumption and the health effects. I stopped eating land animals immediately, and several years and several books later, I stopped eating (or wearing) anything that came from an animal. I just did not want to contribute to violence towards animals or people – violence I would never participate in directly. So, when I became vegan (11 years ago now), it was a very natural and joyful decision that has had many unexpected gifts.

Q: Do you find that there’s an increasing interest in and acceptance of veganism? With campaigns like Meatless Mondays, it seems that people are becoming more interested in giving vegan and vegetarian meals a try.

A: I think there’s absolutely an increasing interest in and acceptance of veganism – or as I like to say in living compassionately and healthfully. I mean – that’s what it’s really all about, and I believe when the bar is raised, people rise to meet it. We have swung so far in the other direction in terms of our egregiously exploitative attitude toward non-human animals and in terms of our destructive eating habits that people are desperate for a change, and veganism affords them that.

Q: You published a well-received vegan cookbook, The Joy of Vegan Baking. Baking seems to be an area where people are most afraid of going without dairy and eggs and trying substitutions – what advice do you have for someone who wants to try it but is unsure about the results they’ll get?

A: One of the things I encourage people to recognize is that what we call “vegan food” is food they are already familiar with: vegetables, fruits, beans, grains, mushrooms, nuts, seeds, herbs, and spices. In the case of baked goods, it’s flour, sugar, cocoa, chocolate, vanilla, baking powder, baking soda, cornstarch, and yeast. I focus on the normalcy of what we call “vegan food” – whether it’s cooking or baking. One of the things I emphasize about “vegan baking” is that though we’ve all been taught that it’s about eggs, cow’s milk, and dairy-based butter, the truth is that’s not what it’s about at all. When you bake, you need binding, moisture, fat, and leavening. That’s it, and those elements are abundant in plant foods. The response to the book has been tremendous. People tell me they are baking again after years of being unsatisfied with other recipes. Non-vegans tell me that my cookbook gave them the push they needed to make the switch, as they lamented they would never be able to bake again. I’m so thrilled.

Q: A lot of people give up dairy or eggs because of food allergies or sensitivities – do you hear from a lot of them?

A: I hear from such a variety of backgrounds who come to my work for one reason and who wind up becoming committed to this lifestyle for so many reasons. One of the most gratifying responses I hear is from people who find me because of health concerns or allergies and who wind up tapping into their compassion for animals; and from people who find my work because of their compassion for animals who become much more interested in healthful eating and cooking!

Q: There’s been a lot of attention lately on the health benefits of reducing or removing animal products from our diets, in part from the documentary Forks Over Knives. What’s your take? Do you think that motivates a lot of people?

A: People are so utterly disempowered when it comes to their health that they are desperate for someone to give them the straight story. It breaks my heart to see how little power people think they have to be healthy, fit, and strong. They’ve been taught to give over all their decisions to the industries who have the most to gain (meat, dairy, egg, pharmaceutical, medical industries) and then become suspicious when a vegan comes along who proposes that plant foods can actually have a great impact. We live in a culture that doesn’t encourage us to eat healthfully and compassionately, and it just drives me crazy. My experience is when you give people the tools and resources they need to make healthful, kind decisions, they do so. So, yes, I think messages about the health benefits absolutely motivates people. The problem, however, is that there is already a lot of information out there about why being vegan is beneficial in terms of our health and our ethics, but there is very little that actually guides people to do it joyfully and confidently. That’s where my work lies.

Q: What’s coming up next for you? Any other books in the works?

A: Related to what I just said, after writing four books I’m extremely proud of, I am incredibly excited about my fifth book, published by Random House: The 30-Day Vegan Challenge. It will be released on August 23rd, and it’s the ultimate guide for anyone who’s ever said they were interested in giving it a try but didn’t know how. For anyone who’s ever said “what about protein” or “how do I live without cheese” or “how do I bake without eggs.” It addresses every single question anyone’s ever asked – about the food, nutrition, social, travel, communication aspects of being vegan. And I absolutely cannot wait!

I’m in the middle of building a web version of The 30-Day Vegan Challenge, and I have several other books in my head that I will write soon. More than that, once The 30-Day Vegan Challenge comes out, I’ll start focusing on having a television show. There’s so much to say, so much information to give people about living as a joyful vegan, and I’m eager to share through in every medium I can!