Why the lazy hazy sneezy days of summer are the worst time of the year for one-in-four Canadians who suffer from seasonal allergies. 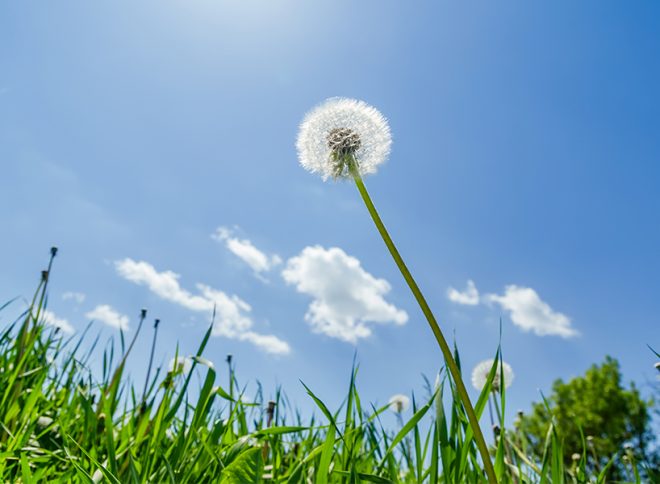 If your most treasured summertime accessory is a wad of tissues and you’re on a mission to find a cheese that pairs well with antihistamines, welcome to the ranks of seasonal allergy sufferers.

It’s a sad group. Just as the weather warms up and the trees begin to green, the symptoms of what doctors refer to as allergic rhino-conjunctivitis begin: Goopy, swollen, red, itchy eyes. Sneezing, snuffling, wheezing, coughing. Some also get an itchy throat or nose.

About 25 to 30 percent of all Canadians suffer from seasonal allergies of some kind, says David Fischer, a Barrie, Ontario, allergist and president of the Canadian Society of Allergy and Clinical Immunology. That means approximately one in four has a twitchy immune system that treats airborne substances like pollen and mould spores as the enemy.

Our bodies release histamines and other substances aimed at expelling the invaders from our noses (sneezing!) and eyes (watering!). “Allergy symptoms are a result of your body’s defense mechanisms,” says Dr. Fischer. “Your immune system is reacting strongly, but for all the wrong reasons.”

What “sensitizes” us to specific allergens — or makes us react so strongly — is up for debate. Allergies tend to be more common in Canada, the United States, the United Kingdom, Western Europe, Australia and New Zealand. A 14-country study found people who grow up on farms are less likely to develop allergies.

Some scientists theorize high levels of hygiene have something to do with the incidence of allergies. “When you have a country as clean as Canada the immune system is basically idle,” explains Dr. Edmond Chan, a pediatric allergist with BC Children’s Hospital in Vancouver. Because the immune system is not as focused on keeping you safe from parasites and infections, “it starts reacting to things that are innocent.”

There’s a genetic component as well, says Dr. Fischer. “Typically, if one parent is allergic the chance of a child developing allergies at some point is about 40 percent. When two parents are allergic it’s about 60 percent.”

Allergy season kicks off when the first snow melts, releasing mould spores into the air, says Dr. Fischer. Mould spores may also bloom in mid-summer, as well as in fall on the slimy under-side of leaves.

April and May are peak tree pollen season, says Daniel Coates, spokesman for pollen analysis specialist Aerobiology Research Laboratories in Ottawa. But trees can begin releasing pollen as early as January in British Columbia; March in Central Canada and the Prairies, and April on the East Coast.

“The pollen season is longer in B.C. because it’s warmer,” says Dr. Chan. Grass pollen can start earlier on the West Coast too, but it usually reaches its pinnacle across the country in June and July, and tapers off in September.

This year has been a tough one for allergy sufferers, says Coates. In Western and Central Canada and the Prairies, a long winter delayed pollen season. As a result, early pollinating trees released their loads later than usual, coinciding with pollen release by late-pollinating trees, grasses and other plants. “We had a massive amount of pollen in the air in late April,” he says.

On top of that, it has been a “mast year” in the Prairie provinces. Just as insect populations vary from year to year, explains Coates, “Mother Nature releases a lot more pollen some years to ensure more trees grow.”

Sufferers may get a short break in mid-summer when pollen season ends. But in August and September, ragweed season begins, causing sniffling from Newfoundland through Central Canada. The notable exception: the weed doesn’t grow in Western Canada — Saskatchewan, Alberta and B.C.

Ultimately, says Dr. Chan, no matter where you live, you can’t completely escape pollen and mould spores. “It’s good to talk to your allergist or physician about options.”