Running my way to happiness

Pant. Sigh. Ugh. Argh. Pant. Pant. Phew. It’s been a few months to say the least since I’ve gone out for a good run. 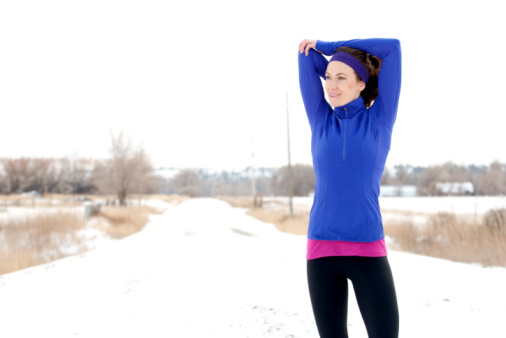 It’s been a few months to say the least since I’ve gone out for a good run. Two? Three months maybe? And while I’ve been an on-again-off-again runner for almost 12 years now, running is still hard work for me. I’m not one of those effortless little gazelles that fly along the pavement—I’m the red-faced runner who thankfully isn’t ashamed to show how hard she breathes sometimes to make it through a run.

So as part of my promise–not resolution–to myself to revisit the sport in the New Year, this morning I tied up my Sauconys and called up Katy Perry, Weezer, Beyonce and Rage Against the Machine’s help (in the form of my running playlist of course) to face the -2 Toronto weather and get running. It was a short run, 2 kilometres only (tracked with this handy free tool) but one that was desperately needed. Sure, I indulged in more peanut butter balls and haystack cookies than I should have over the holidays and I most definitely welcome the physical benefits of running. But it’s also the mental health bonuses I’m after. The high, or the sense of accomplishment that I feel after a run. Or how sometimes I think through a story I’m working on or brainstorm new story ideas while thudding along. Or maybe just the healthy dose of fresh air that a run gives me, breaking up the cabin fever I’m so prone to developing around this time of year.

Of course I’m not the only one who’s running for more than just her body. In fact, I asked my friend Corinne Lynds, a seriously accomplished runner with 10 years of races such as the NYC  Half-Marathon, the ING Ottawa Marathon, the half-Ironman 70.3 Muskoka and the Around the Bay 30K Road Race under her shoes about what kinds of mental health benefits she gets from running. “My self confidence is 500 per cent more than it was before I started running and doing triathlons,” says Lynds. “I have done so many things I would never have dared to dream about 10 years ago. And running lets me eat pretty much whatever I want. Plus, when I’ve been out for a run, I feel all proud of myself, not guilty for being lazy and food tastes that much better when you’ve gone out and earned it!”

So how about getting me back on the track so to speak. Any advice? Here’s what she suggests.

*   Set a goal race. Even if it’s not with a time goal, just sign yourself up for something and do it. Chances are, knowing you have that event coming up you’ll be motivated to lace up the shoes more often.

* Run without a watch for the first few runs back and allow yourself to fall back in love with running before you start worrying about your pace.

* Make some running dates. Running with other people is more fun and will likely push you to run a harder than when you’re on your own.