After David McGuire sustained a brain injury in 2005, doctors told him that he would never walk again. A year later, he entered his first marathon. Now, he’s running a marathon a day across Canada, in support of brain injury awareness, as part of an event he's created called A Run to Remember. 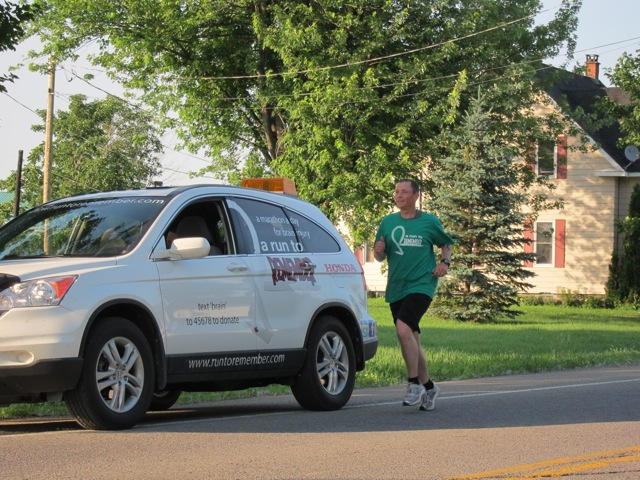 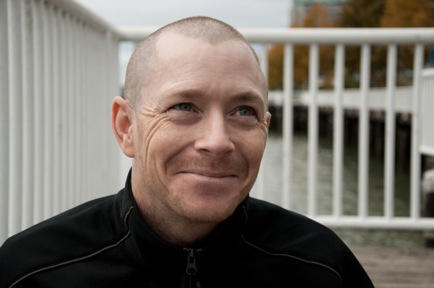 After David McGuire sustained a brain injury in 2005, doctors told him that he would never walk again. A year later, he entered his first marathon. Now, he’s running a marathon a day across Canada, in support of brain injury awareness, as part of an event he’s created called A Run to Remember.

McGuire’s epic journey started on a slightly overcast day on April 1st in St. John’s, Newfoundland. He’ll keep running until he reaches Victoria, B.C. in late October. This month, he’s passing through Ontario, and to celebrate the ground McGuire has already covered, the mayor of Toronto has declared July 22 “A Run to Remember Day.”

Chatelaine caught up with McGuire on a short pit stop on his way to Toronto.

Q: Why are you running across Canada?

A: Before my brain injury in 2005, I knew nothing about these kinds of injuries. After going through the struggles that I went through during my rehabilitation, I realized that it is a silent epidemic: every three minutes there is a brain injury in Canada — and the majority are preventable. I wanted to get the word out about how common brain injuries are, and also how preventable they can be, in many cases. Most brain injuries are caused by something so simple as not wearing a helmet.

Q: How did you get your brain injury?

A: We don’t know 100 percent how I got it. We do know, now, that I had a series of mini-strokes while I was working, but because of my age — I was 35 at the time — no one knew that I was having strokes. And then, I had one, final major stroke that caused me to slip and hit my head. My brain started to bleed and swell quite seriously, and a portion of my skull had to be removed to allow for the swelling. Now all I have to remember what happened is a large scar on the side of my head.

Q: Why are you calling your run “A Run to Remember”?

A: My specific disabilities since the injury now include short-term memory loss and a form of aphasia. If you think of the movies Memento and Fifty First Dates, it gives you a rough idea of what it’s like. Tomorrow, when I wake up, I won’t remember talking to you. The other issue I have is with aphasia; often the word that I am thinking in my head isn’t always the word that comes out of my mouth.

Q: How does your short-term memory loss affect you on your runs?

A: Things that I don’t access on a daily basis are harder for me to retrieve. Because my Run to Remember is highly repetitive, and a fairly simple action, I know that I’m running each day. Now the interesting thing is this: when I stop and look back to where I’ve started, or if I see pictures of myself on my runs, I can’t recall those moments at all. I can’t pull any specific moments from my day-to-day runs from my memory.

Q: On your website, you write that you have “no mental map that guides you, and no memory of where you are or where you’re going” — what does mean exactly?

A: You could say that my internal GPS is off. To give you an idea: you sit in your office, and you know where your home is roughly located in relation to your work desk. I don’t have that kind of internal mapping anymore. I don’t have that sense of where I’m heading like I used to, so I have to rely on a lot of electronics. My Garmin GPS watch tells me how far I’ve been running, and helps me set a pace so I don’t burn out before I’ve hit my target for the day.

Q: What made you decide to run after your injury?

A: I ran my first marathon a year after my accident. The doctors had told my family that I’d never walk or talk again, but if you know me, you know I’m not the kind of person that’s ever going to accept defeat. Since then, I’ve done an Olympic-distance triathlon in Vancouver and the Penticton Ironman.

I started running out of frustration. Before my accident, I was independent. I was probably making more money than I should have, and within a split second, everything went away. I was in the hospital for 29 days, and when I finally left, the life I had known completely and abruptly changed forever. I moved back in with my parents, back to the very small town I had grown up in. There I was at 35 years old, living in my parents’ office on a foldout bed. I was reliant upon them for everything. Because my cognitive and verbal skills weren’t well, it was hard to explain what I needed.

One day, I wanted a hair cut, and I couldn’t explain it, so I threw on a pair of boots and jeans and tee-shirt and left the house. I was familiar enough with the town from growing up there so I kind of knew where the barber was — it’s a really small town so you can’t get lost. I ran to the barber, and I must have been some sight to see, running down the road with half a head of hair on one side of my head, and a large scar running down the other. They had sent me home from the hospital, with half of my hair shaved off for the surgery. I got to the barber, and I couldn’t remember why I was even there. He cut my hair and made it look more even on both sides. I managed to find my way back home.

It was the first time that I had done something on my own since the accident. With running, I found that I didn’t need anyone but myself. I didn’t need a doctor or a psychologist. I felt like I broke through a prison.

Q: What does a typical running day for you look like?

A: I have oatmeal and a protein shake in the morning and set off around 9am. I’ll run for two hours, and take a little break. Then I’ll run for two more hours and take another break. Depending on where I am, I might stop and give a talk at a school or other place where I can raise awareness for brain injuries and discuss the importance of helmets and other forms of prevention.

Q: How do you plan your runs?

A: Because of my memory, and because I don’t know where I am, all the planning falls to my run manager, Melissa. I get up in the morning, and she points, “Go that way.” She follows in a car alongside me. When I come to an intersection, I’ll look back at her, and she motions left or right, and I go.

Q: What keeps you going?

A: Well, two things: I forgot that I ran the day before! [laughs] On a more serious note, I’m able to keep running for a very personal reason. There was a local brain injury association right by my home, and I went into it a couple of times after my injury, looking for help and support groups. I went back one day, and found it had closed due to lack of funding. At first, I had a poor-me attitude, but then I started thinking about people who weren’t as functionally capable as me — where do they go now? It hit me really hard. It’s easy to complain that things should change, but I think if you’re going to complain, you should be willing to do something about it.

I spent a lot of time screaming and yelling on the inside, but that wasn’t getting me anywhere. I wanted to help out, and I knew I could run. Now, I go places. I’m running across Canada to get the word out. This is an easy way to get people talking, because there are a lot of people who can’t speak for themselves.

Q: What do you think about when you’re running?

A: When I’m tired, and my legs start to hurt, I think about the people I saw when I went through rehabilitation. They got up again after going through so much more than I had, and they made even better jokes than I could. All the sudden, my achy legs don’t matter any more. I also love listening to the Ricky Gervais podcasts. They are so funny. And the best part about having short-term memory loss is that I can listen to same one over and over again, and the jokes are just as funny as the first time.

Q: Where did you find this humour to talk about your disabilities?

A: What’s the alternative? I went through years of pretty serious depression after my injury. But I looked at where my depression was getting me, and it was nowhere. Humour helps me pick up my feet and moving forward. I was also pretty funny before my accident, so I guess I haven’t lost that.

Q: Based on your experiences now, what do you want people to know about brain injuries?

A: I didn’t know anything about brain injuries, until one happened to me. The experience opened my eyes. It’s easy to disconnect and overlook a person with a brain injury because it’s not something you can always see. My big message is that the majority of brain injuries are preventable. And if they can be prevented, I want to make people aware of how to do it.  If I can get one person to throw on a helmet, or to think twice before not wearing a seatbelt or diving headfirst into a pool, I feel like I’ve made a difference.

Each and every brain injury is unique, and I want to help prevent the preventable ones. If we can do that, then we can free up the resources and services desperately needed for brain injuries that aren’t preventable.

Q: Any last words to share before you hit the road?

A: Number one: if a guy with half a brain can do something like this, imagine what you can do. I always say that with a laugh, but I mean it. It is sad that it took a life-changing injury to make me realize the potential that I had. I hope that I can show people that they can achieve great, great things, no matter the setback.

Also, come run with me! You can track me on my website. If you like to run, I’d love the company.

BrainTrust Canada, a community rehabilitation association, says that it has set up a Legacy Fund for McGuire’s A Run to Remember event, with proceeds to promote brain injury prevention and develop new strategies for people living with brain injuries.

Check out McGuire’s progress on his personal running blog.