While planning my wedding, I suffered a debilitating stroke. In recovery, I found strength I never knew I had 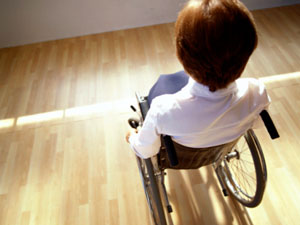 Two great surprises in the year after my fiftieth birthday changed my life. The first was John. I was living in England at the time, but during a trip across Canada, I reconnected with John, an old school chum. To our mutual shock, we fell in love and soon decided to make a life together in Vancouver.

In March 2001, I flew back to England to sell my house and organize our wedding. Shortly after I arrived, the second surprise came.

I was lying on the bed one evening, talking to John on the phone, when I began to feel pins and needles in my left hand. I switched the receiver to my right hand, and we carried on talking. Ten minutes later, I reached out to pick up my glasses, but my arm wouldn’t work. I had an almost giddying sense of unreality. I mean, this doesn’t happen; your arms and legs do what you tell them to do.

I hung up and called an ambulance. I’d already begun slurring my words; my tongue felt like a chunk of meat in my mouth. Fortunately, my speech was still clear enough for me to ask for help. I was worried the paramedics would think I was drunk.

Then I thought I’d better go down and unlock the front door for them, but when I tried to get off the bed, I fell – hard. It hadn’t occurred to me that my legs might not be working either. Luckily, the phone fell with me. John called back and talked to me while I lay on the floor. I was grateful he was with me; the wait felt interminable. I was terrified.

John was still on the line when the ambulance attendants broke in. They told him they were taking me to the hospital. By then, I’d realized that I was probably having a stroke – my father had had one, and I was being treated for high blood pressure, which is a risk factor. By the time we reached the hospital, I was fading in and out of consciousness. I don’t remember much from the days that followed. I do recall that, at one point, I woke up to find a breast in my bed. I knew it wasn’t mine because if you touch your own skin, you can feel it. I lay there thinking, How can there be a breast in my bed that doesn’t belong to me? I had no feeling at all in my left side. It was as if someone had drawn a line straight down my body and everything on the left was gone.

Even when the doctors confirmed I’d had a hemorrhagic stroke, I had trouble grasping just how serious my prognosis was. I thought I’d be in the hospital for a little while and then I’d be able to resume my normal life.

My children, Max and Bonnie, were both off at university at the time. Suddenly, they were put in the very adult position of having to help care for me. They handled it with incredible grace. I remember my daughter arriving at the hospital. She walked in with this wonderful smile and kissed me. Only later did I realize how bravely she coped, because nobody had warned her about what I looked like: Half my face had just dropped.

John flew over from Canada and was there, too, as much as he could be. When he had to be in Vancouver for work, I’d scribble letters all day with my good hand and my children would fax them to him each evening.

I suffered periods of terrible depression. No one could tell me if I’d ever regain any control over the left side of my body. I felt a real sense of injustice: I was fit. I was taking my blood-pressure medication. It was a relaxing period of my life; I was in the midst of a year-long sabbatical from my career as a special-needs teacher. I thought, Why now? As I learned, it could have happened anytime; hemorrhagic stroke can occur even in childhood. So, in a sense, I was very fortunate.

I stayed in acute care in the hospital for six weeks, and then I spent just over five months in a rehabilitation facility. I was fiercely determined to carry on being my own person, to be able to dress myself and get myself to the toilet. My progress felt slow. A nurse would ask me which underwear I’d like to wear that day, and I just felt so angry that it should be anybody else’s business. The loss of control was terribly undignified.

After three months in rehab, my physiotherapists wanted to get me to stand on my left leg. I had absolutely no feeling in it. Four physiotherapists held me at different parts of my body and took my right leg off the floor. I felt like I was suspended in space. It gave me vertigo and I began to panic – I was sure I was falling. It felt like an endless drop in a nightmare. I cried afterwards, partly out of delight that I’d gotten up there but also because it had been very frightening.

This, in a sense, reflected my entire experience. I was facing a whole new relationship with my body and a whole new life. It felt as if the ground beneath me was just gone.

In the first several months, and even after that, I didn’t want to live; I couldn’t see the point if I was unable to live the way I’d lived before. When John arrived at the hospital after my stroke, I told him I didn’t expect him to go through with the wedding.

I’d gone from feeling young for my age to being catapulted into old age. Early on in the hospital, a physiotherapist pushing my wheelchair parked me in front of a mirror, and it was the cruellest thing. I just saw this old lady staring back at me, slumped over. I didn’t expect John to want to marry this.

But John was adamant. We got married that August. The wedding was on a Friday in an English town near where I had lived most of my life. My goal all through July was to be able to stand for the wedding. And I did manage it: I stood for my vows. At the reception, John toasted his “gritty” bride, which everybody laughed at. But he meant gritty like John Wayne â true grit. I thought it was a lovely thing to say.

In June of 2002, I moved to Vancouver to be with John. I didn’t know another soul in the city, and suffering a trauma can be isolating. It’s difficult sorting out who you are again. Not long after the move, someone suggested I attend a program through the University of Victoria, called Living a Healthy Life with Chronic Conditions. Reluctantly, I went. Every week, you set a goal. One week, I decided I would try to prepare a meal. It required enormous planning. Even chopping an onion was hard. My left side would spasm unpredictably, so I didn’t want to put my left hand anywhere near the knife. With no way for me to steady the onion, I just bashed at it with this very sharp blade until the pieces were small enough to fry. Half of it flew off onto the floor, but it didn’t matter. It was a magnificent step on the way to regaining my capability.

Before the stroke, I was quite good at crafts, and I wanted to knit again. I visited knitting stores, asking for advice, and they just said, “Well, you know, you have only got one hand.” Finally, a store clerk suggested using big needles and thick wool. I bought this beautiful hank of blue wool for a scarf. Holding one of the needles between my crossed legs, I just kept knitting and knitting. The thing ended up being about six feet long. It didn’t matter that the tension in the knit wasn’t even. I was just so pleased that I could do it. Later on, people would admire this scarf and I was always proud to say I knitted it myself.

Life’s harder as a disabled person, no doubt about it. You do have to be gritty. And you have to be a bit daring. In her book Mindfulness, the American psychologist Ellen J. Langer wrote that we tend to stare if somebody is different than we expect them to be. We all do it; it’s a reflex. And the next reflex is to feel embarrassed, so we look away. I found myself on the receiving end of this, and it was hurtful. Langer’s theory was that if I found a way to give people permission to look, then they could do so without feeling embarrassed. So I dyed my hair purple, a big purple streak. It was magical. Suddenly people were coming up to me and saying, “Wow, I love your hair.” It transformed everything.

That connection with people – community – is supremely important. Everyone wants to feel connected and useful.

When I was a special-needs teacher, I felt I had a purpose. And I knew I wanted to get back to something close to what I’d done before, to help people somehow. Taking the program at UVic had been so helpful for me that I decided to become a program leader. I achieved that and more: I now have a job with a stroke mentoring program. I am so thrilled; it’s my first paid job in my new life.

Another thing I’m proud of is starting the Vancouver Younger Stroke Survivors peer support group. I didn’t have a support network. Other stroke support groups are very much geared to older people. When you have a stroke, you’re suddenly surrounded by men in their seventies. I found myself thinking, Is this my peer group?

My group held our first monthly meeting in April 2006. We now have about 30 members, including people in their twenties. We talk about those things that aren’t understood by others or would be too frightening for those close to us to hear: our depression, fears and feelings of humiliation. We share our triumphs, too. It’s been wonderful to talk freely and to know you’re not alone, and that it does get better.

A final surprise is how grateful I feel. Not only for my family, my children, my husband and John’s son, Bram, but for my new life. I would never have believed that I would go on to live such a fulfilling life. Full and fulfilling.