The Canadian model and advocate is facing a second battle with cancer, and her resolve is stronger than ever.

Elly Mayday died on March 1.  “Ashley was a country girl at heart who had a passion for life that was undeniable. She dreamed of making an impact on people’s lives. She achieved this through the creation of Elly Mayday which allowed her to connect with all of you. Her constant support and love from her followers held a special place in her heart,” posted her family on social media. Chatelaine had the opportunity to speak with Mayday in June, 2017.

Elly Mayday grew up on a farm in Aylesbury, Sask., (population 50) baking pies with her mom and dreaming of international adventure. While working as a flight attendant with Sunwing, she posed for pin-up shots for a local car show to make extra cash, and eventually scored a modelling job with lingerie company Forever Yours. Then, in 2015, she was diagnosed with ovarian cancer — the third-most common reproductive cancer in Canada, killing more than 1,700 women a year. She kept posing in lingerie, her head bald from chemotherapy and her surgery scars in full view. Now, at age 28, Mayday has been modelling full-time in New York City, but returned to Canada for two reasons: To keep spreading her message of body acceptance and health advocacy, and because her cancer has returned. Mayday and her mom have moved to Vancouver while she awaits treatment and crafts plans for a cross-Canada speaking tour. During a quick stop in Toronto last week for Knixwear’s Spin in Your Skin event, Mayday spoke with Chatelaine about listening to your gut, body-image hang-ups and being a model of strength, even when faced with a life-threatening illness.

You’ve said that if you didn’t trust your instincts, you’d be dead. How did following your gut lead to your diagnosis?
One day I went into the emergency room because I couldn’t stand up to get my jeans on. I was in such immense pain in my back. Doctors were really not following through on treatment. They said “Strengthen your core! Lose some weight.” I lost 30 lb. during those three years and still experienced the same pain. The voice in my head and the voice in my heart kept growing and said “There’s something wrong.” I had CT scans, I had ultrasounds, I had physicals. But this type of cancer is not seen in the younger years — I was 25 when I got diagnosed, they weren’t expecting it. I don’t fault them for that, but I do fault them for not listening to me as much as I needed to be listened to. I ended up saying, “Until I know what’s going on, I’m not going back to work.” That choice was the best thing I could have done for myself — it made people sit up and notice, like “OK, she’s not working now. The pain is real.”

Related: Doctors took 5 months to diagnose my tumour — by then, it had ballooned to 20 cm

You hear a lot about how women’s pain isn’t taken seriously.
We’re not given enough credit for our bodies. Being sure of myself was really my strong point through this diagnosis and getting through ovarian cancer. I’ve had doctors say “Wow, how did you get diagnosed?” My cancer is really rare, it’s called low grade serious carcinoma. Unfortunately it was in the third stage when I finally did get my diagnosis, but there’s no way to early-detect ovarian cancer. That’s a huge problem.

You left your job as a flight attendant and then you had this new career on the horizon, all around the same time of your diagnosis.
In that year leading up to my diagnosis, I had been working as a model doing lingerie shoots and embracing my size-14 body. That really helped me get through the diagnosis — feeling good in my skin. I had a couple of contracts in New York, everyone was excited, and I thought, “OK, I’ll get rid of this little bump in front of me, this little hurdle.” It turned out to be a mountain. I had a full hysterectomy, so I won’t be able to have children. I went through three months of chemo as well as five operations. One of them lasted 10 hours.

Why did you decide to be so public with your cancer diagnosis, while pursuing your modelling career? Posing in lingerie with surgery scars and a bald head takes guts.
I’d always preached body love and being okay with yourself exactly as you are. And I thought being diagnosed with this type of cancer really needed to be talked about. So I decided to embrace the baldness and embrace the scars and think of it as a really wonderful thing that happened in my life. 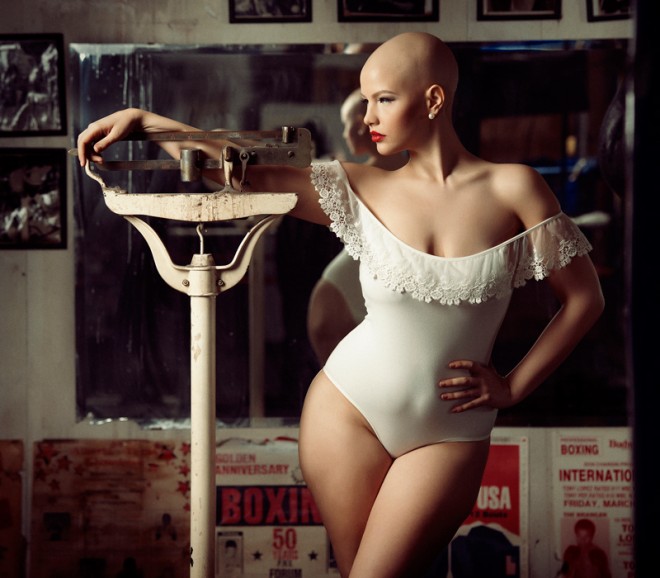 You characterize the cancer as a gift. But are there moments when you think ‘Did this have to be my gift?’
Yes. It’s a difficult thing to be given, to have to go through. As terrible as it is, it’s been really wonderful to connect with people and to show that I not only say this, I walk the walk and I actually live this life. Being public about it, it wasn’t a decision that took too long to really come to. It was like, “It’s needed, it’s necessary, it’s going to be wonderful and I’m going to make this positive.”

So the cancer has returned. Does that challenge your role as a health advocate?
I think that if I face it the same way I did the first time, we will come out with a positive end result, which would be my life. When I got the diagnosis just last week, I thought “Alright, this one’s for the people in the back, the people who didn’t see me go through it the first time.” With ovarian cancer, a lot of women get a recurrence. The future treatment plan is “to be determined” as I await my MRI.

Are you disappointed?
There’s a little bit of disappointment, but I feel like it’s putting me back on the path that I want to be on. I moved to New York and I was doing the modelling thing there and still am, but I think this just makes me re-evaluate everything I’m focusing on. I’m more than just a mannequin. I want to be that source of strength for all the women and men. You’re stronger than you know and you can get through incredible things in life with the right kind of idea towards it.

Related: Why 2017 will be the year I stop trash-talking my body

Chatelaine just did a survey of Canadian women aged 35–45, and 52% of them told us they think they need to lose 20 pounds.
We’re raising insecure women and that’s the last thing you want to do. Having a negative view of yourself is going to affect your entire life. Why are we allowing this to happen? We need to be out there saying “You are beautiful the way you are, you are whole enough and you are complete.”

Body positivity has been really sewn into our public conversations now — what’s really making change and what’s just lip service?
A lot of companies are jumping on board with the body positive mentality because that’s what other people are doing and they’re seeing that it’s working. Women are tired of not being represented in media. To know that a size eight is “plus-size” in fashion is one of the most messed up things. Technically I am [plus-size], but I would say that I’m just like the average girl. That’s what I always say, “You can call me whatever you want, just don’t call me late for dinner.” I don’t mind being called plus-size but it throws this idea to younger girls, like “Oh, you’re plus-size.” No, I’m curvy, and I’m a woman. This is just the size I am. 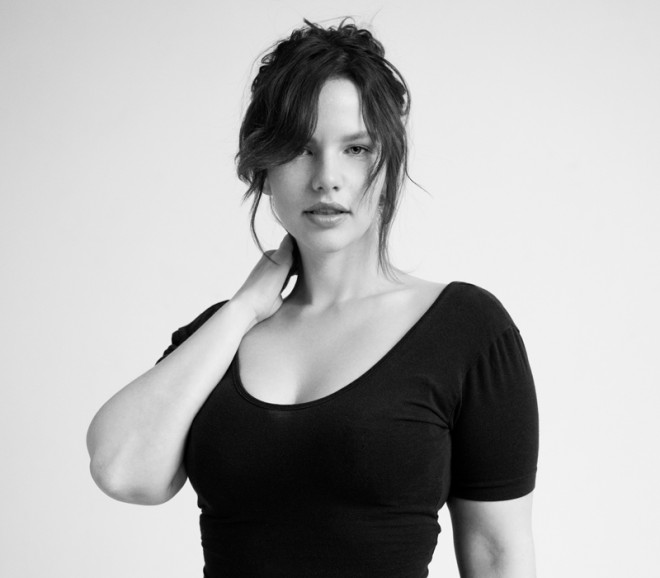 This interview was condensed and edited for clarity