The P.1 Variant Is Spreading In Canada. What Do We Know About It?

So far, evidence suggests it is more infectious, causes more severe infection, and evades immunity in those who have been previously infected. 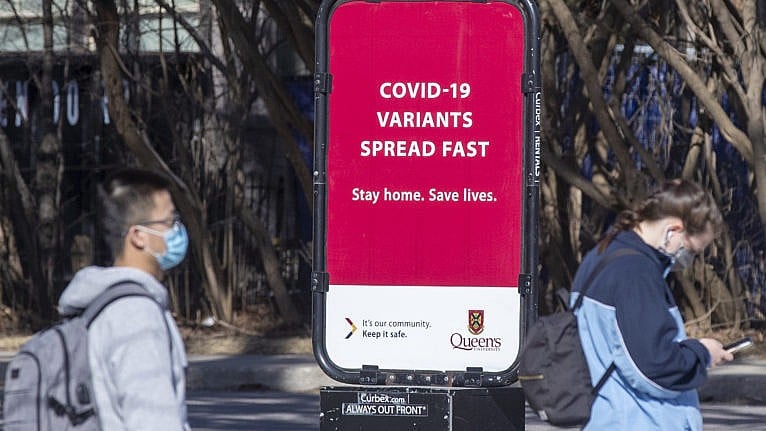 People wear masks to protect them from the COVID-19 while standing next to a information about the ongoing pandemic in Kingston, Ontario on Monday, April 5, 2021. THE CANADIAN PRESS IMAGES/Lars Hagberg

“I learned about P.1 in late December 2020, and it made my head spin,” says Dr. Sarah Otto, Canada Research Chair in theoretical and experimental evolution. “A year had passed without a major evolutionary shift in SARS-CoV-2. Then, over the course of a month, two major variants of concern were announced [B.1.1.7 from the U.K. and P.1 from Brazil], with a third soon following [B.1.351 from South Africa].”

Why is P.1 considered a variant of concern?

“Every virus is going to pick up some genetic variation and much of it won’t really matter,” explains Dr. Caroline Colijn, Canada 150 Research Chair in mathematics for evolution, infection and public health. “But the reason we call these variants of concern is that we are concerned about them.” In particular, she explains, scientists look for three factors: whether the variant is more infectious; whether illness resulting from variant infection is more severe; and whether the variant can undermine a person’s immunity even if that person had already had COVID.

Both Colijn and Otto say P.1 appears to hit the trifecta. “Evidence from Brazil suggests it is a triple whammy—it spreads faster (40-120 per cent), can overcome immunity of previously infected individuals (25-61 per cent more frequently than “classic COVID”), and is more lethal (by 10-80 per cent),” detailed Otto, who is also a zoology professor at the University of British Columbia, in an email to Maclean’s.

Who is at highest risk from P.1? Does it, like B.1.1.7, have more of an adverse impact on younger, healthier people than classic COVID?

“Initial data suggests that P.1 impacts everybody more severely. This, along with the fact that we have vaccinated the most vulnerable elderly population in many places, mean that younger adults now represent a much larger fraction of those in hospital and critical care,” says Otto.

One of the mutations in P.1. is called E484K, which it shares with the B.1.351 variant (but is not currently found in B.1.1.7, though that mutation could occur, Colijn says). It is located in the spike protein and is called an “escape mutation” because it helps the virus slip past immune defences built as a result of previous exposure, according to an analysis in the British Medical Journal. In other words, P.1 has the ability to overcome the immunity developed by people previously infected with COVID-19.

Another attribute that all three VOCs share is “one additional mutation that deletes a small part of the drably named ‘non-structural protein 6’ (NSP6),” Otto explained earlier this year in The Conversation. “We don’t yet know what the deletion does, but…[it] might alter the ability of the virus to take hold and replicate within our cells.” In other words, it’s more likely to take hold.

How P.1. will fare against the dominant VOC of B.1.1.7 isn’t certain. A preprint study published on MedRxiv on April 7 looked at that interaction in Italy by measuring the proportion of P.1 cases in central Italy over a month. It found no change in that overall percentage, “suggesting the inability by this lineage to outcompete B.1.1.7.”

P.1 was first detected after a group of travellers returned to Japan from a trip to Brazil. Researchers then traced the P.1 VOC to the Amazonian city of Manaus, where it emerged in December 2020. Its highly infectious nature meant it quickly became the dominant strain in Brazil. It’s in Manaus where researchers discovered that people previously infected during the city’s big first wave were being reinfected.

On Feb. 8, Ontario confirmed the first case of P.1 in Canada through genomic testing. That case was linked to international travel from Brazil, according to the National Collaborating Centre for Infectious Diseases. On March 9, British Columbia reported its first case of P.1. The next day, the province reported another 13 cases.

In particular, it is widely prevalent in the ski resort of Whistler, which closed after more than 1,500 cases were reported since the new year. While there’s a low risk of contracting the virus while actually skiing, such resorts, with their congregate housing and indoor gatherings, have proved to be good places for spreading the virus, Colijn notes. Now, British Columbia is vaccinating everyone who lives or works in Whistler in an effort to stop the outbreak. The P.1 variant is believed responsible for many cases in the outbreak among players and staff in the Vancouver Canucks organization that caused the NHL team to suspend its games after the team lost 5-1 to Winnipeg on March 24.

All three VOCs arrived and spread in Canada through travellers. Although experts warned about that risk, the border restrictions imposed by federal and provincial governments were full of holes, says Colijn, who is also a mathematics professor at Simon Fraser University. For example, though passengers arriving in Canada on international flights need PCR tests as well as hotel stays and quarantines, others “are taking taxis across the U.S. border,” she notes.

“I feel we’ve lost an opportunity, and I’m still mourning that loss,” she says. “We thought it was self-evident that [we wouldn’t want] something that was 40-to-100 per cent more transmissible, and maybe more severe in Canada, and maybe we would take steps to stop that from happening.”

Are the vaccines effective against P.1?

Scientists are seeing signs that vaccines are less effective against B.1.351 and their concern is that the same may hold true for P.1, given that the variants share the E484K mutation. Currently, there isn’t solid data as to how existing vaccines hold up against P.1.

When asked if P.1 could mutate into something even worse, Otto explains, “The worst-case scenario is that we have so many cases of COVID-19 that variants build up mutations that evade our immune response, rendering our current [efforts] ineffective over the course of the year.”

“But I’m actually mainly hopeful,” she continues. “The U.K. and Israel have vaccinated a large portion of the population and haven’t seen a resurgence of COVID-19; [there are] no signs of a major escape mutation. I’m also hopeful because our immune systems are incredible—they throw an arsenal of responses from antibodies to T cells and B cells. So it’s actually hard for a virus to escape our immune system, because it isn’t just one thing that it has to escape from. And even if it can escape the arsenal in me, that doesn’t mean it can escape the arsenal in you, because everybody develops a different immune reaction.”

As for Colijn, one of the things she’s losing sleep over is the fact that Canada is relying on vaccinations as the cornerstone for our way out of this crisis, the idea being that once we vaccinate everyone, the pandemic is going to end. She worries about a new VOC being discovered in a large country where vaccination is widespread. It may be like P.1 but even better at getting into immunized people. And what if that VOC was found in a country like the U.S. or Britain, with which Canada has lots of international travel? she asks.

Then, Colijn asks, “Are we going to actually decide as a country that we don’t want that [variant of concern] to establish itself [here]? Or are we going to take the same attitude of closing half the holes and say, ‘Oh no, that will be fine, nothing to worry about, no special measures are needed, there is no data to say this is a problem in Canada.’ Are we going to do this again?”