What We Know So Far About Omicron, The Latest COVID Variant Of Concern

From how vulnerable Canada is to what the vaccine makers are doing in response. 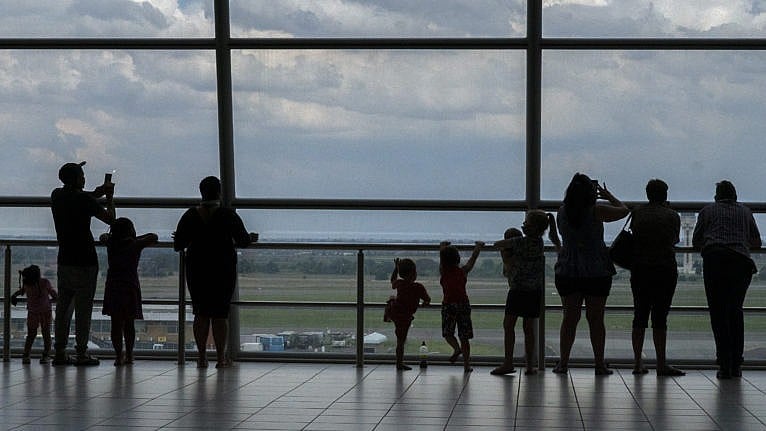 Families watch planes on the tarmac at Johannesburg’s OR Tambo’s airport, Nov. 29, 2021. WHO urged countries around the world not to impose flight bans on southern African nations due to concern over the new Omicron variant. (AP Photo/Jerome Delay)

Omicron entered our lexicon at exactly 12 p.m. Eastern Time on Nov. 26, according to Google Trends, which recorded a massive spike in online searches. Since then, searches have only increased as people scour the web for news on the newest variant of concern.

So new is the variant, however, that researchers are scrambling to unravel its secrets—likely for few weeks but possibly more—and pleading for patience. “We know that getting a rapid understanding of disease severity with Omicron (particularly in vaccinated individuals and re-infections) is absolutely critical, but it’s just too early for reliable data,” cautioned Dr. Richard Lessells, an infectious diseases specialist at the University of KwaZulu-Natal in Durban, South Africa.

So, as more cases are detected around the world, including in Canada, no one is sure how Omicron will stack up against the current COVID-19 variant heavyweight, Delta, or how it will affect the vaccines currently approved for use. Still, there are some things that we do know:

First, a bit of background: Viruses regularly mutate, it’s in their nature. So while experts have identified many mutations or evolutions of the original SARS-CoV-2 virus, only a few rise to the level of being labelled variants of concern. Perhaps the two most famous are Alpha and Delta, which were the causes of Canada’s second and third waves in the winter and spring of 2020-21. (The Pango Network tracks their lineages; or instance, Alpha—a.k.a. B.1.1.7—comes from the B.1.1. Lineage, sandwiched between B.1.1.5 and B.1.1.8, neither of which amounted to much.)

The researchers in South Africa were concerned about Omicron because of its specific mutations, and because of a rapid rise in cases in the region. Dr. Tulio de Oliveira, director of the Centre for Epidemic Response & Innovation (CERI) in Stellenbosch, told a press conference that “this variant did surprise us.” In particular, they had found more than 30 mutations on the spike protein of the coronavirus.

That spike protein is important, not only because that’s how the SARS-CoV-2 virus latches onto healthy cells in the body but also because the current crop of vaccines take aim at that same spike protein by using harmless versions of it to generate an immune response in people.

Experts are concerned that the mutations in Omicron’s spike protein may mean that vaccines are less effective, or that people who have already recovered from COVID-19 could be susceptible to this new variant. At the same time, researchers caution against thinking we’re returning to March 2020. For one, they don’t believe that Omicron will completely evade the vaccines. Moreover, there are now many more treatments for COVID. And vaccine makers are already pouring over data to see how they may need to tweak the make-up of the COVID-19 vaccines.

The other concern is how transmissible Omicron could be. From this virus’s perspective, transmissibility equals success. The Gamma variant was perceived as a dangerous brute until it was effectively swept aside by the far more transmissible Delta.

According to local reports, the new variant was discovered by Dr. Sikhulile Moyo, a Zimbabwean-born scientist working at the Botswana Harvard H.I.V. Reference Laboratory. He was doing genomic sequencing on positive COVID-19 test samples and noticed that several had scores of mutations not previously seen. At around the same time in neighbouring South Africa, researchers were discovering the same mutations in test samples from a cluster of cases in Gauteng.

South Africa reported the new variant, B.1.1.529, on Nov. 26 and asked for an emergency meeting of the World Health Organization. On Nov. 26, the WHO named it Omicron and classified it as a variant of interest.

Right now, researchers, especially those in southern Africa, are sharing information with colleagues around the world. On Nov. 29, Dr. de Oliviera stated that South Africa’s Centre for Epidemic Response & Innovation had uploaded all its raw sequencing data for Omicron to the U.S. National Center for Biotechnology Information website. (Things are moving so quickly that Twitter is a de facto notification system.)

What does this mean for the world?

Well, no one is sure right now. It takes time to examine new variants and determine their threat level.

At the same time, the virus will continue to mutate. It can be slowed and possibly stopped by vaccines but only if the entire world is vaccinated. And right now, much of Africa is still waiting for doses to arrive, while other areas are fighting disinformation that is slowing immunization efforts. In sub-Saharan African, the vaccine leader is South Africa, with just 25 per cent of its people fully vaccinated, followed by Botswana at 20 per cent, according to Our World in Data.

What does that mean for Canada?

Canada is still quite vulnerable: 22 per cent of our entire population is unvaccinated, according to Health Canada. And, as we saw this summer during large outbreaks in Alberta and Saskatchewan, the viruses can easily circulate in areas where vaccination rates are low. Plus, when case counts rise, so do hospitalizations, which means that overstretched health-care systems have to postpone other non-emergency surgeries and treatments.

Why are countries so quickly finding cases of Omicron?

Researchers in South Africa figured out how to quickly identify Omicron through a standard PCR nasal swab test. As the World Health Organization explained in its technical briefing document on the variant: “Several labs have indicated that for one widely used PCR test, one of the three target genes is not detected (called S gene dropout or S gene target failure) and this test can therefore be used as marker for this variant, pending sequencing confirmation.”

Public health authorities around the world now had a way to quickly scan positive COVID tests for the new variant, even while waiting for full confirmation through genomic sequencing, which takes around 10 days. And sure enough, they started reporting cases.

Some countries like Israel and Japan are closing their borders. Should Canada?

One can’t help but be concerned by the possible dangers of Omicron, which is why many governments, including Canada, quickly piled on extra public health requirements on travellers. On Nov. 26, when no cases had been detected in Canada, Ottawa put new testing measures in place for Canadians and residents who had been in southern Africa, while banning nationals who had recently been in those nations. Two days later, two probable cases were found within our borders.

As more specific testing is done, more cases are being found around the world, including throughout Europe and Australia, which aren’t on Ottawa’s travel restriction list. By Nov. 29, there were at least 184 confirmed and 1,305 probable cases around the world, according to a tracker from Newsnodes.com.

As Canada and the world discovered with Delta,once there is community spread, border restrictions rapidly lose their value.

Why is it called Omicron?

Well, B.1.1.529 is a mouthful. On June 1, the World Health Organization adopted a more user-friendly naming system based on the letters of the Greek alphabet for the general public. While the next unused letter after Mu (a variant identified in Colombia in the summer) was Nu, both it and the next letter, Xi, were deemed too confusing (many pronounced Nu as “New,” which implies its something different, while Xi is a very common surname). So, the WHO went to the next option: Omicron.