Novavax's Vaccine Will Be Produced In Canada. What Do We Know About It?

Trials are ongoing, which allow a window into how well Novavax's vaccine stands up to emerging variants of COVID-19. 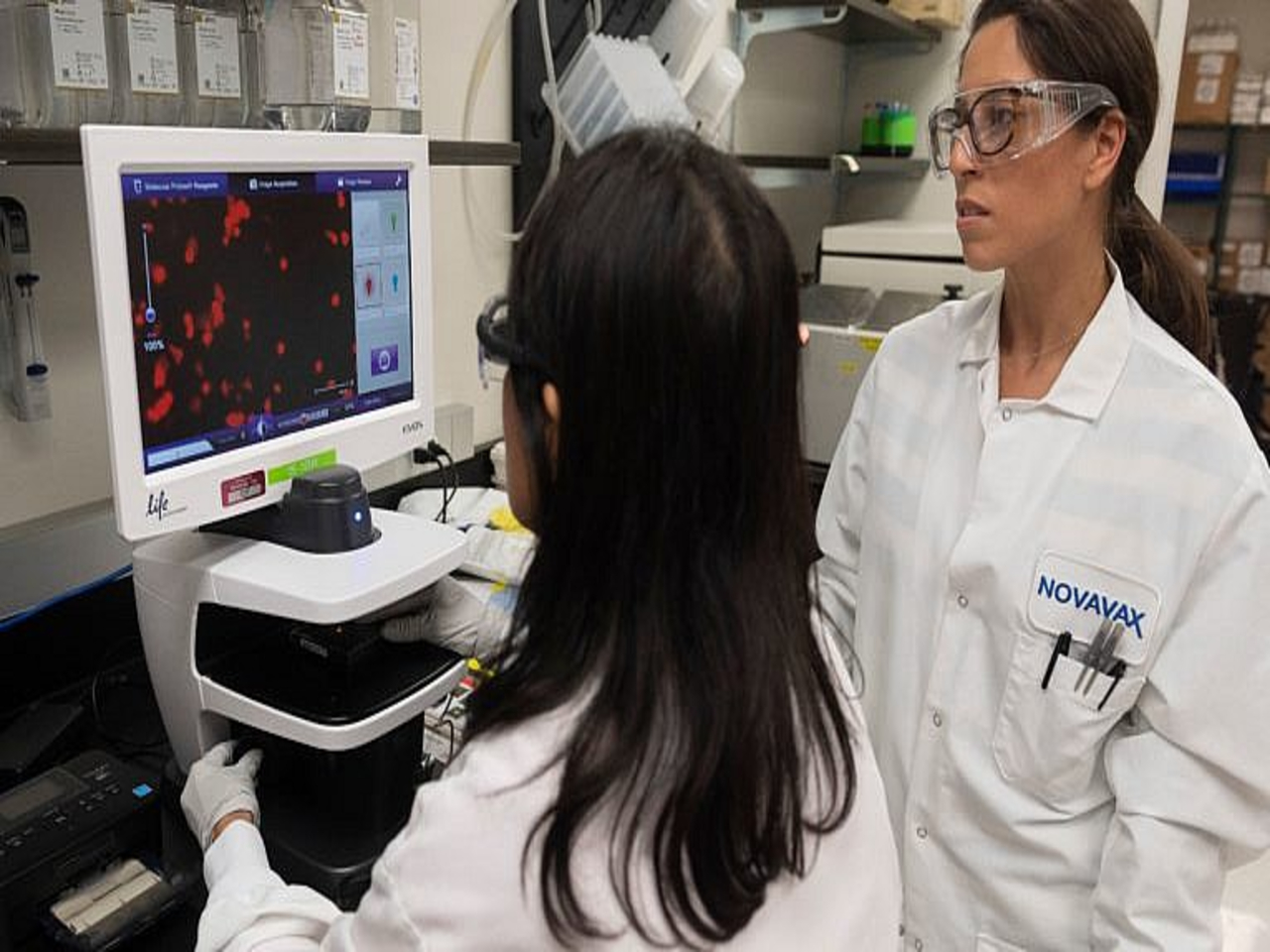 Dr. Sonia Macieiewski (R) and Dr. Nita Patel, Director of Antibody discovery and Vaccine development, look at a sample of a respiratory virus at Novavax labs in Gaithersburg, Maryland on March 20, 2020, for the coronavirus, COVID-19. (Photo by ANDREW CABALLERO-REYNOLDS/AFP via Getty Images)

On Feb. 2, Prime Minister Justin Trudeau announced that Canada will start producing COVID-19 vaccines. “We’ve signed a memorandum of understanding with Novavax to produce their COVID-19 vaccine at the new NRC [National Research Council] Royalmount facility in Montreal,” the PM said. “Pending Health Canada approval, tens of millions of Novavax COVID-19 doses will be made right here at home.”

But no one should expect made-in-Canada doses any time soon. The NRC centre is still being expanded and will need to be configured to Novavax’s production specifics. And all of those steps require regulatory approval, meaning it’s unlikely it will produce doses until near the end of the year at the earliest.

As yet, the Novavax vaccine—a protein-based vaccine that uses lab-grown spike proteins to mimic those of the SARS-CoV-2 virus and which instruct our body’s immune system to make antibodies—hasn’t been approved for use anywhere. Health Canada received Novavax’s data application for approval on Jan. 29. Novavax is a small firm relative to other vaccine producers such as AstraZeneca and Pfizer. In 2019, before being chosen to participate in the U.S. Operation Warp Speed vaccine program, its value was just US$250 million, Reuters reports. Now, it is worth US$19 billion.

Other trials are still ongoing:

And while the research continues, when Novavax released some interim findings in late January, its CEO said that it is gearing up production: “We should be at full capacity starting in May or June, maybe as much as 150 million doses per month globally,” said Stanley Erck.

Here’s a breakdown of what we know about the vaccine:

How many doses of the Novavax vaccine do you need?

Two doses given 21 days apart is how the vaccine is being tested in the large U.S. phase 3 trial.

What is its efficacy?

First, the caveats: trials are still ongoing, and full peer-reviewed studies haven’t been published, so this interim data from Jan. 29 will change.

Efficacy against the old strain of COVID-19: 95.6 per cent

Experts note that as this vaccine is being tested while more contagious variants are circulating, its efficacy may not be directly comparable to those of earlier vaccines, such as Pfizer and Moderna, whose clinical data was gathered before the mutations were widely circulating.

Have there been any severe outcomes?

That’s still unclear, though the first interim analysis of the British trial indicated no severe cases of COVID-19 in vaccinated participants.

As noted in the Vaxx Populi post on the AstraZeneca vaccine, this initial result shouldn’t be underestimated. “I don’t actually care about infections. I care about hospitalizations and deaths and long-term complications,” Dr. Ashish Jha, the dean of the Brown University school of public health, told the New York Times. In addition, the Times noted that, “of the roughly 75,000 people who have received one of the five [vaccines from Pfizer, Moderna, AstraZeneca, Novavax and Johnson & Johnson] in a research trial, not a single person has died from COVID, and only a few people appear to have been hospitalized. None have remained hospitalized 28 days after receiving a shot.”

What are the advantages of this vaccine?

There are lots of seniors enrolled in its trials, unlike those of some other vaccines, such as the one from AstraZeneca; this is important given that the older age group is at much higher risk of severe outcomes from COVID-19. And its big trials are occurring now, which means experts get to see how it holds up against the new variants of concern, unlike other vaccines, which were tested earlier.

It has standard refrigeration storage requirements, like the AstraZeneca vaccine.

Are there any “known unknowns”?

Experts will want to see final data, in particular to determine how well the Novavax vaccine stands up against the British and South African variants (as explained in the Efficacy and Concerns sections).

How many doses of Novavax has Canada ordered?

Are there any concerns with this vaccine?

The biggest concern right now for all the COVID-19 vaccines is how well they stand up to the new variants that are rapidly becoming dominant strains around the world.

A real-world test occurred last fall, during the phase 2b trial in South Africa of 4,400 participants. During that time, B.1.351 became the dominant variant in the nation (92.4 per cent of all genomically sequenced COVID-19 cases in the trial were of that strain). For the 94 per cent of the participants who were HIV-negative, the efficacy of the Novavax vaccine was 60 per cent, falling to 49.4 per cent for all participants. Though the trial was small, the results were concerning enough that Novavax is already working on vaccines that will work against the South African variant.