She had a baby on her own to save her happiness

Single and 41, Nina Davenport decided to have the baby she'd always wanted on her own. She documented it in her new film First Comes Love. 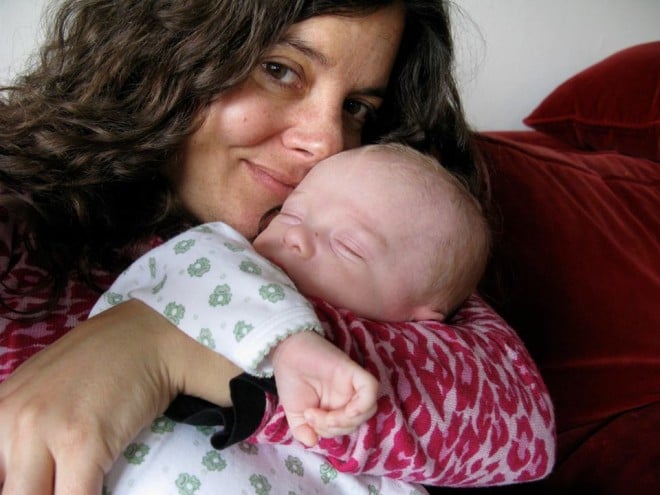 When filmmaker Nina Davenport decided to have a baby on her own at age 41 (through in vitro), there were people who didn’t support her decision. They doubted her financial situation and her ability to weather such tough job alone. But Davenport decided to take charge of her own happiness and committed to having the baby she’d always wanted. Her documentary about the experience, First Comes Love, recently ran on HBO, and will be airing on TVO later this year.

Last week I spoke with Davenport about what it was like to make the decision to have a baby on her own and what it felt like to create her own happiness.

Q: Why did you decide to become a single mother?
A: It’s more that I wanted to become a mother, and there was no other way to do it. I saw 42 years old as the cut off, and I viewed my decision as a last resort. I felt like if I didn’t do this I would be unhappy forever. It was that important to me.

But my perspective on this has changed. If you had told me at 30 that I would end up being a single mother, I would have been traumatized. I was very fixated on getting married and the whole traditional path. But assuming some sort of financial and emotional stability, it’s not some awful last resort. Now that I am a single mother, I realize that I’m much better off than my friends who are getting divorced and fighting over custody. I don’t ever have to worry about that.

Q: You have an interesting discussion in the film where you talk to a friend who says she just knew she couldn’t be happy unless she had kids. Can you explain what that feeling is like?
A: To me, it’s so fundamental to being a woman that I’m very fascinated by my friends who don’t have that feeling. In some ways, I’m envious of them because having kids is an unbelievable amount of work and requires unbelievable amounts of patience. But for me, that desire to have a creature that came out of my body and that was part of me, and that I was willing to give everything to, was so strong. Part of it is because I had such an amazing relationship with my mother.

Q: What’s been the hardest thing about being a single mother?
A: What’s hard for me is what’s hard for everyone: it’s just hard being a parent. It’s 24-7 for the rest of your life. Your mind is always elsewhere, and it’s all-consuming. And I don’t have anyone to whom I can say, “Can you take over, I’m dying.” But I do call my friends when I feel like I’m losing it, and I don’t feel like I’m in this alone.

Q: There are several people in the film who tried to dissuade you from making this decision; where do you think that response comes from?
A: In the case of my father and sister-in-law, they have a distorted perspective on how much money you need to do anything. And another part of that is a worry about trying to do it alone. But I spent a year in India, and if you look at the developing world, a lot of people are being raised by single mothers. The idea that I couldn’t do it made me nervous and upset, but I chose not to believe them.

Q: Are you happier now that you have a son?
A: Definitely. It’s everything I thought it would be, and more. It’s the most wonderful, awesome, fulfilling, deeply meaningful experience you can have in a lifetime. The only downside is that you love them so much that if something ever happened, your life would be ruined. You’ve basically created something that has the power to destroy you.

Q: Has anything been a surprise to you?
A: I thought I really, really wanted a girl and I was devastated when I found out it was a boy. It was the second anniversary of my mom’s death when I found out, and I guess I was hoping to keep that bond alive. But I’ve been a bit surprised by how much I love having a boy. It’s been a good life lesson about not always knowing exactly what will make you happy, but happiness comes in surprising ways. This whole thing started because I did not find Mr. Right in time to have a family. But I’m so happy now, and I’ve realized that you need to embrace life as it comes.

Let us know what you think of Davenport’s story in the comment section below.