My Periods From Hell

How I learned to fight the silence and shame, and live with my endometriosis.

My uterus turned on me when I was 13.

The severe pain, numbing cramps and heavy bleeding of my periods plagued me for two weeks every month, and I started popping Advil and Midol like they were Skittles. I remember sitting perched upon a super-plus-plus-with-wings maxi pad one afternoon in Mr. Hess’s Grade 8 math class. It was day 11 or 12 of my period, and I was trying to find a way to sit that didn’t aggravate the intense pain deep in my pelvis or the waves of nausea. Standing up to go to the washroom I felt blood swilling out of me. I made it to the bathroom and checked for feet before rushing into the last stall to throw up and change my pad. I returned to my seat as though nothing had happened.

Everyone complained about cramps and PMS—I assumed mine weren’t anything special. But after two years of this, I finally told my parents, who took me to see our family doctor. An ultrasound showed multiple ovarian cysts—which, while often benign, can cause incredibly painful periods and heavy bleeding. I was prescribed the Pill as a method to regulate my estrogen and hamper the growth of new cysts.

I thought I’d escaped the worst, but it was only the beginning. The intense monthly pain returned and sex, which I started having as a teen, was torturous. In 2010, when I was 23 and studying psychology at Dalhousie University, I found a word for what I was going through in an article in Glamour magazine: endometriosis. One of the most common, least diagnosed chronic illnesses in women, endometriosis affects one in 10 women worldwide, and the average time to diagnosis is seven to nine years. It’s estimated that 1.7 million Canadian women are affected, and endometriosis is more than just painful periods. The disease occurs when tissue similar to the lining of the uterus grows on other parts of the body, like the ovaries, bladder, bowels, pelvic wall and, in rare cases, the lungs and brain. Much of the symptom list—pelvic pain, back pain, severe menstrual cramps, pain during sex, abnormal or heavy bleeding—was familiar. It was a relief to be able to put a name to my ordeal.

My family doctor took some convincing when I told her I thought I had endometriosis. She said I was worrying too much and that my experience was normal. What she didn’t tell me is that endo symptoms are elusive and similar to other medical conditions, and endometriosis lesions are not detectable via ultrasound unless grouped to form so-called chocolate cysts, or endometriomas. The only way to a definitive diagnosis is through laparoscopic surgery. I persisted and got a referral to a gynecologist who was very patient but suggested that I was too young to think about surgery and proposed I continue managing my symptoms with the Pill. This is a common approach; the Pill helps regulate estrogen to stop endo from thriving. But I was desperate to know if endo was the reason for my suffering and told her I would keep asking. She relented.

My surgery was booked for November 2011. I desperately hoped she wouldn’t find anything and yet wanted her to validate all I’d been through. In the end, she found endometriosis lesions on my pelvic wall, ovaries and behind my uterus, and performed ablation—a technique using a laser to burn off endo lesions. The doctor assured me it was good they caught it early, that I should notice a significant difference from now on. She encouraged me to stay on the Pill to prevent new growth.

I felt vindicated. I was right.

Endometriosis is now being spoken about with real urgency. Lena Dunham candidly shares her endo struggles on social media and in 2018 she wrote about her hysterectomy experience in Vogue, saying “I just sense that the uterus I have been given is defective.” Women like this encourage others who are fed up with being ignored to share our stories and challenge the years of silence that have shrouded discussions about women’s health. Abby Norman’s 2018 book, Ask Me About My Uterus: A Quest to Make Doctors Believe in Women’s Pain, documented years of struggle and served as a call to arms for women to advocate for better treatment. “I’ve often found it curious,” she writes, “that when a woman is suffering, her competence is questioned, but when a man is suffering, he’s humanized.” It’s a reality that many women with endo can relate to.

I wished I’d encountered their raw honesty when severe pains returned three years after my diagnosis. By this point I’d moved to Toronto with my partner, Dave, who I met in 2014 when he was a chef and I worked as a server at a Halifax pub. On top of pelvic pain, I bled every single day and had a perpetual tension headache for months.Consistent, mysterious chest pain provoked frequent panic attacks and was explained away by doctors as anxiety. After many months of struggling, I realized that the Pill was no longer improving my quality of life—in fact it was making it worse. For the first time in 13 years, I stopped taking it.


Within a month I was back in the hospital—I hadn’t been able to use the bathroom (number one or two) without blinding pain for days. When I mentioned I had endometriosis, the attending physicians ordered a transvaginal ultrasound (the one where they manoeuvre a condom-wrapped, dildo-shaped camera inside of you). I sobbed quietly while the technician apologized for facilitating the knifelike twisting inside my vagina.

The source of my pain was a large chocolate cyst on my right ovary. I was referred to a gynecologist who sent me on my way with my very own morphine prescription and more questions than answers: What does this mean? Is my endo back? Why now? Is it my fault? Will it go away? Will I be able to have kids? Soon after, I gave up my daily yoga practice because the discomfort made it too difficult. The pain intensified, I gained weight and spiralled into depression. I was diagnosed with hypothyroidism, a common comorbidity with endometriosis, and given more meds.

I felt entirely betrayed by my body. For 15 years my existence had revolved around pain and shame. There was a constant dull ache in my pelvis, as if my insides were being hollowed out with a razor-edged spoon. Sometimes it was a sharp pain, like someone fired a flare gun inside me. I felt defeated, always dreading the next wave of agony. I was a human shell hiding pain, anguish and frustration, a stranger in a body that I no longer understood.

I was hovering on the verge of a total breakdown. I missed work and withdrew from my social life. Depression moved in and whispered lies in my ear like “You’re a burden,” and “Their lives would be better off without you.” I started seeing a therapist but was hesitant to take antidepressants.

Soon it became too much, and one afternoon when I was home alone I recklessly took a small handful of morphine pills. I just wanted the pain to stop, I needed everything to stop. I needed to cease existing so the people in my life didn’t have to deal with me anymore. Depression told me I was doing them a favour. Fear and panic overwhelmed me when I realized what I’d done and I immediately forced my finger down my throat. I collapsed crying on the bathroom floor. 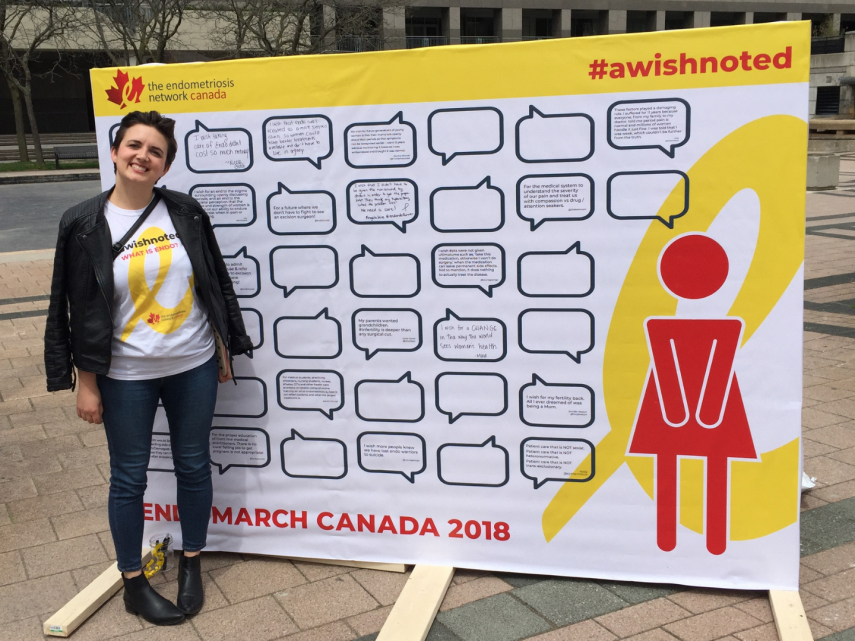 I realized that, while I wanted to live, I couldn’t live this way anymore. That December I found an endometriosis support group in Toronto. The monthly meeting was coming up at a community space and I forced myself to go. That decision changed everything. I sat there for two hours, listening intently as women shared their stories of pain, monthly blood transfusions, doctors dismissing their concerns, and sobbing on the bathroom floor. There were women as young as 19, women approaching menopause, and everything in between.

Suddenly, the isolation, fear and depression weighing me down felt a little lighter—I wasn’t the only one. These women talked about laser therapy and cannabis for pain management, the struggle of finding a good specialist (not all gynecologists can recognize endo, I learned) and the frustration of living with this disease. I in turn shared my story with a room full of people who understood me, and it was liberating.

I found a specialist through a recommendation from the group. We discussed my history, what had worked (surgery) and what hadn’t (hormones, pain meds). She was willing to perform excision surgery, which removes endo lesions from the root rather than burning them off, like my first procedure. When I asked whether or not a hysterectomy would be a good solution, she said it wouldn’t cure my endo, which occurs outside the uterus. My surgery would be in November, six years after the first one.

During the four-hour procedure at North York General Hospital, the surgeon found seven areas of endo lesions on my pelvic walls, utero-sacral ligaments, behind my uterus and on my lung. She consulted with a thoracic surgeon and they left the last lesion, since excising it could put me at risk for a collapsed lung and I wasn’t “symptomatic.” Unless I experience more extreme symptoms (coughing up blood), it was better to leave it be.

The post-surgery healing process was much longer and more laborious than I imagined. I worked towards cultivating patience and self-compassion, a seemingly never-ending task. Over two years later I’m still waiting on a pain-free period, though my non-menstruating days are slightly more bearable.

On the advice of some fellow endo sufferers, I got a medical cannabis prescription, which helped me get back to myself and manage my pain and anxiety. Libido, sex drive, and self-confidence have been trickier to regain, but I’ve learned to appreciate where I am now instead of yearning for a former self that is gone forever (most of the time). I’m not infertile but I’m still figuring out if conceiving a child is something I even want—the thought of caring for another human when some days I can barely care for myself is terrifying. I revived my therapeutic home yoga and meditation practice and I listen to my body instead of cursing it for not performing.

Not everything has improved: the neck, chest and shoulder pain characteristic of thoracic endo has become more prevalent, and I am vigilant for bloody coughs. The past year saw me diagnosed with irritable bowel syndrome, although there are no guarantees endo hasn’t migrated to my bowel. I’m not keen on another surgery to find out. Bloody stools are common, dietary restrictions are necessary and my life is dictated by my bowels and pain levels. I’ve given up on full-time work and I’m pursuing part-time and work-from-home options because my health is too unpredictable. I’m learning how to live where I am now, which is both frustrating and rewarding.

Instead of feeling betrayed, I now revere my body for its resilience. I may never be free of endometriosis, but at least I no longer feel powerless.