Should You Be Worried About Monkeypox?

Here’s what you need to know about the virus, its risk factors and how to prevent outbreaks. 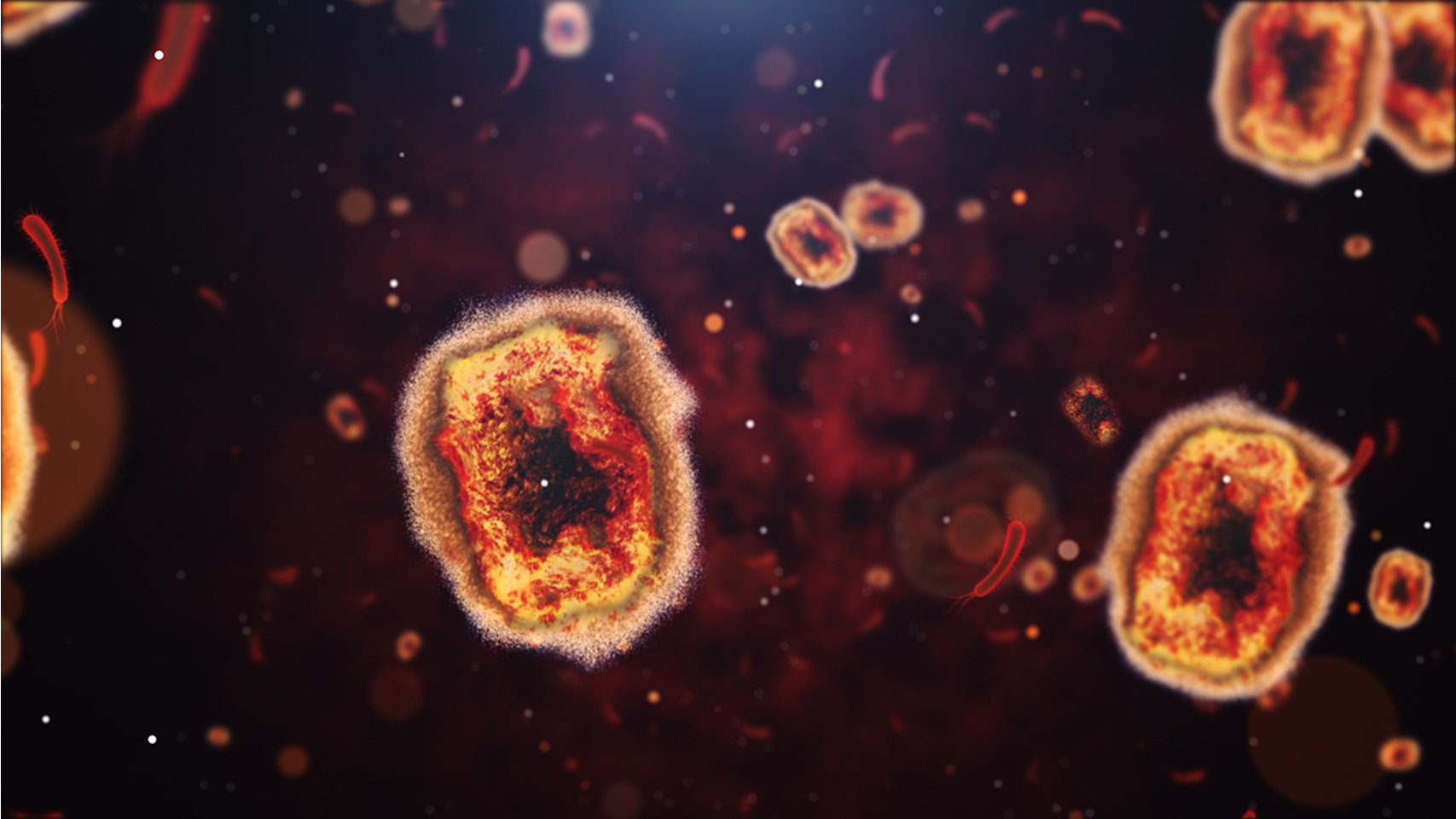 When a multi-country infectious disease outbreak made headlines in May 2022, many Canadians were, understandably, concerned. Monkeypox (MPXV) was something most of us had never heard of until a few weeks ago, and there were immediate questions about risk, transmission and prevention. Plus, were we headed toward a second pandemic?

To learn more, we spoke to Dr. Isaac Bogoch, an infectious diseases specialist at Toronto General Hospital who focuses on neglected tropical diseases and global health, and Dr. Jason Kindrachuk, an assistant professor in medical microbiology and infectious diseases at the University of Manitoba.

Monkeypox is an orthopoxvirus, which is a genus of viruses that also includes smallpox. It’s a unique, distinct virus that is not the same as smallpox—whose prominent symptoms were fever, malaise and a large number of painful lesions on the body—but it’s fair to think of them as related illnesses.

While the virus may be making headlines now, it’s not new. Monkeypox was discovered in non-human primates in the 1950s and was first identified in humans in the 1970s, but it’s likely been around for millennia. The virus is endemic in several countries in West and Central Africa including Nigeria and the Democratic Republic of Congo, where they’ve been dealing with outbreaks on a regular basis for decades. Prior to this current outbreak, monkeypox cases in the global north were rare, infrequent occurrences.

Symptoms of monkeypox include lesions (often on the genitals or the anus, but not limited to those regions), fever, aches and pains, and swollen lymph nodes. Not all symptoms present in all individuals—so, someone with a confirmed case of monkeypox may have just a few lesions followed by a fever, for example. The virus is transmitted primarily by direct physical contact like touching, kissing or dancing closely, but can also spread by droplets while in close proximity to an infected person.

“Evidence suggests that it doesn’t spread primarily by aerosols. We cannot preclude that it doesn’t happen, but it looks to be predominantly close physical contact,” Kindrachuk says. “Transmission between people is something we still don’t fully understand. Much of the early literature was based on humans in contact with wildlife—this is a virus that… gets into multiple species, so much of those early transition events came from contact with animals.”

How is monkeypox different from smallpox?

Some good news: Monkeypox is significantly less contagious and less severe than smallpox was. The fatality rate with monkeypox is extremely low—in fact, zero deaths have been reported during this current outbreak in non-endemic countries, whereas the more common variant of smallpox had a mortality rate of 30 percent. Another important difference is that smallpox hasn’t been in circulation for about 50 years.

“Smallpox has been eradicated, meaning it does not exist in humans on the planet,” Bogoch says, noting that it can only be found in carefully monitored laboratory settings. “Smallpox causes a very significant illness and there was a large, coordinated global response to eradicate it with mass vaccine efforts that were very successful.”

As a result of this eradication, Canada stopped vaccinating the general public for smallpox in 1972.

Does the average Canadian have any immunity against monkeypox?

The short answer is “maybe” or “probably not,” depending on your age. The smallpox vaccine offers some cross-protection against monkeypox, but just how much (and for how long) is unknown. If you were born after 1972, it’s unlikely that you were immunized against orthopoxviruses unless you’re a lab or healthcare worker who required protection due to potential exposure, or someone who has lived in a region affected by monkeypox.

Older individuals who were vaccinated for smallpox in their youth likely have some protection against monkeypox, but the specifics are vague. “There likely is some retention of some amount of immunity in some individuals, but we don’t really know,” says Kindrachuk. “It’s a question of duration and that’s something we’re trying to find an answer for.”

Bogoch agrees. “It’s an answerable question, and my guess is that it will provide some degree of protection against infection and mitigate severity of illness, but we’ll be able to better quantify that in the weeks to come.”

Essentially, if you were immunized against monkeypox several decades ago, it’s better than nothing and may reduce the severity of an infection, but there isn’t enough data to provide a clear picture at this point in time.

How serious is the risk of monkeypox to Canadians? Who is most at risk?

“As of late June 2022, the risk to the general public is minuscule,” Bogoch says. “Without a robust and coordinated public health response, that risk could change.”

While this particular outbreak in North America has largely affected men who have sex with men (MSM), at a broader level, there is no specific health risk to this group. “For over five decades, this disease has affected every demographic, not just the MSM community,” Kindrachuk says. “We should not look at this as a disease that only affects these communities because historical data shows that this is not the case.”

Sex, gender and sexuality have zero bearing on whether or not you contract monkeypox—it’s an infectious disease that spreads by physical contact, regardless of who that contact is with—so this outbreak could have just as easily been within a sports league or college campus setting. However, because the virus made its way into the MSM community during this specific outbreak, we are seeing an overrepresentation of cases in the demographic.

More data is needed but given what is known, Bogoch says those who are most likely to be at risk for more serious outcomes from monkeypox are immunocompromised individuals, children, seniors and pregnant women.

What preventative measures are necessary at this time? Are treatments available?

One piece of the puzzle is immunization using the smallpox vaccine. Getting immunized pre-exposure offers significant protection against monkeypox. As well, getting immunized up to four days after exposure will help prevent monkeypox and will also lessen symptoms should you contract it.

In Canada at this point in time, vaccines are being rolled out to high-risk individuals only—those in the MSM community or individuals with a known exposure, for example—and it’s possible we’ll see increased immunization in healthcare and laboratory settings. The incubation period for monkeypox is typically 1-2 weeks, and individuals are not thought to be contagious during this time—that sets in once symptoms are present.

Widespread immunization isn’t necessary or realistic at this point in time, but there are other tools available. Contract tracing is important, as is reporting any symptoms you experience to your healthcare provider. There are effective medications for rare severe cases, Bogoch notes. “They aren’t widely available, but we do have them available to us.”

COVID-19 remains an ongoing issue. Are we headed toward a second pandemic?

If we see the robust, coordinated public health effort referenced earlier, there is no reason to believe we’re headed for another pandemic, Bogoch says. “My personal opinion is that we should be able to eliminate monkeypox from Canada if we do everything right,” he says. “It’s going to grumble along for a while, even with a perfect public health response, but the goal should be to eliminate monkeypox from Canada.”

However, that doesn’t mean a strong response isn’t critical. “[Monkeypox and COVID-19] are interrelated in the sense that they both require significant public health resources and infrastructure to curtail, so that’s an issue right off the start,” says Bogoch. “I never think it’s an okay time to panic, but I hope people are informed.”

How can we prevent future global outbreaks of infectious diseases?

To put things bluntly, we need to care about these viruses a lot sooner—not just when they reach high-income countries like Canada and the United States. Monkeypox has been an ongoing issue in parts of West and Central Africa for about 50 years, but those regions have not had the attention, resources or support needed to eradicate the virus. So, with waning immunity in the general public (the result of immunized individuals around the world growing older and dying) and increased global mobility, outbreaks like this are inevitable.

“There hasn’t been a huge focus on research to understand monkeypox, and just calling it what it is, that’s because it doesn’t really impact the western world where we really focus on things that affect us,” Bogoch says. “As a result of ignoring this and other neglected tropical diseases, we’ve left others to suffer.”

When an infectious disease affects a low-income region only, it’s often ignored until there is an effect in a high-income country.

When there were Zika outbreaks in several South and Central American countries in 2015 and 2016, for instance, people in the global north didn’t leap to eradicate the virus—they simply changed their vacation plans to avoid those locations.
Similarly, monkeypox has affected thousands of people over the years and has been a consistent health threat in Central and West Africa. However, until these recent outbreaks in Europe, Canada and the United States, very few people were talking about it or offering support.

Today, focus remains on the global north and unfortunately, as we deal with outbreaks here, it’s likely that low-income regions will be dealt another blow. “There are still a limited number of vaccines, we will likely see vaccines go to higher income countries,” Bogoch says, noting that this inequitable distribution also happened with COVID-19 immunizations.

Bogoch wants to see a coordinated international public health response to address global health threats before they reach high-income countries. “It’s the ethical and moral thing to do, and it creates a safer environment here in Canada. Monkeypox is but one of many, many other infections that don’t impact us here right now but could in the future. We really need to invest in global health and countries that aren’t as fortunate as we are.”

Kindrachuk agrees, noting that we should be learning from the medical and research communities in regions where monkeypox and other infectious diseases have been endemic for decades.

“This is a wake up call,” says Kindrachuk. “If you leave infectious diseases to circulate in vulnerable areas of the world because we think it won’t have an effect on us, it will have an effect on us. We’ve known about this for decades. It was a ticking time bomb.”

One that with a more global approach in the years to come, we could turn off.