Mommy wars: How not to judge the Thong Mom

Sometimes getting moms together can be like getting a few girls together for a play date— three’s a crowd and someone’s gonna get talked about or left out. So was the case back in my daughter’s music class five years ago. 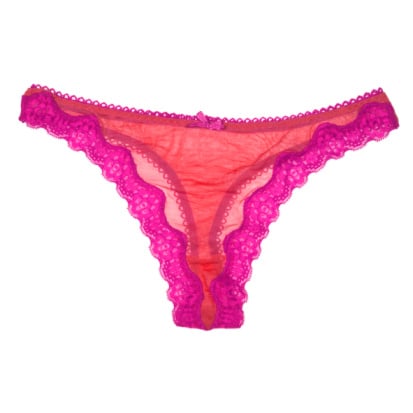 Sometimes getting moms together can be like getting a few girls together for a play date— three’s a crowd and someone’s gonna get talked about or left out. So was the case back in my daughter’s music class five years ago. We participated in the Saturday morning class along with good friends who had a son. Somehow, our after-class walk-pick-up-lattes-ritual turned into, well, shredding apart some of the other moms in class. Particularly one, who routinely let her thong underwear pop out of the back of her pants as she leaned into the circle of toddlers to retrieve a jingly ball or shaker for her child. Who does that in a kid’s class? we’d wonder about Thong Mom, as we walked home after class.

Aaah, the Judgy Mommy. Don’t say you haven’t done it, even those of you who soft-pedal it (“Our kids are going to do this instead of this.” they inform you haughtily.)  I’ve had friends talk about kids in a “different snack bracket” (a.k.a. organic-only/ refined-sugar completely-and-microscopically-removed/only sourced locally snacks), or titter “No judgment, but I don’t know why Family X refuses to vaccinate their child!” Throwing out the “No judgment” disclaimer first always seemed two shades away from “I’m not racist/homophobic but….” to me.

And if we’re not doing it secretly, then we might be surfing sites such as UrbanBaby.com, a site I used to frequent to read nasty posts skewering suburban moms or women wondering why their “dc” (dear child) didn’t get accepted into the coveted preschool their less-intelligently gifted dc of a friend did. And it was the subject of a debated piece this week in Salon as well—why are we moms, who I once thought supported each other in a we’re-all-in-this-together kind of mentality, doing this to each other?

“I don’t think this is a new phenomenon, that mothers were judgmental before,” says Alyson Schafer, a psychotherapist and author of Honey, I Wrecked the Kids. “But women were judged on how white their whites were, or how fluffy their lemon pound cake was. And now parenting has become an important topic culturally. It didn’t used to be as important—you were running a household and people looked at you as a domestic engineer of which parenting was only one part of the puzzle. And we were more apt to think if a kid was acting up, well he’s a bad seed. We didn’t blame the mother. And now we know that parenting has an impact we’re more likely to worry that people are judging us based on our kid’s behaviour.” Schafer also points out that our judginess can also be a by-product of being raised as girls who please, and like we used to look for validation in the things we wore or how we acted, we now look for validation in how we parent.

So how can we make it stop? How about creating an imaginary touchstone. “I ask parents—have you ever been wrongly judged? Think about the morning that you dropped your kid off and forgot their lunch because you were rushing to the hospital because your mother-in-law had a heart attack,” she says. “So when you see someone who, for instance, their kid isn’t dressed well, rather than jumping to assumptions about the mother, you can choose what to think. You could choose to think the mom had an emergency that morning and just forgot. We don’t know other’s realities or whole stories.”

Sounds good to me. The next time those judgy thoughts start creeping into my head, I’ll have to remember the time, say, my 20-month-old climbed out of the grocery cart seat and started running across the top of the cart. I was desperately finishing paying and scrambling to get to him before he took a flying leap off the top. (I made it—phew!) But hey, don’t judge me.