Get the scoop on how guys feel about that certain spark 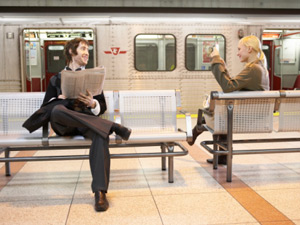 Why are some people better at flirting than others? When it goes wrong, it can be awkward and sometimes offensive. But when there’s that spark of connection, flirting provides a lot of ego-boosting bang for your buck. There are common signs of flirting: raised eyebrows, nodding, smiling, eye contact, physical contact. It sounds simple, but sometimes it can get complicated. We talked to men of all ages to find out what they had to say about flirting. And we gathered a couple of cringe-worthy stories, too.

What makes you flirt with a woman?
Her eyes. If she looks at me in a certain way, I know she’s a flirt. Like she wants me to notice her. That’s not a bad thing, it’s a great thing.
– Joe, 29

Nothing makes me do it, it just happens naturally if I like her, as a friend or as romantic potential.
– Mo, 32

If I’m in a good mood and I get a good energy from a woman, then I’ll flirt with her. But I don’t think I’m a big flirt. I’ve had a few massive failures.
– Andy, 38

How do you flirt?
I touch her somewhere. I mean on the arm or hand or back! If I want to touch her, then I’m flirting with her.
– Marcus, 36

Try to make her laugh. If you can make a woman laugh, it’s a good starting place.
– Tony, 42

When she’s smiling a lot, but also looking away. That’s a good sign.
– Peter, 44

How can you tell when a woman is flirting with you?
You can just tell. It goes both ways, right? Women can tell when we’re flirting with them, so it’s the same for us. There’s a connection or a shared joke or you’re attracted to each other. It isn’t always about sex. Sometimes it’s about platonic chemistry.
– John, 52

When a woman looks you in the eye and smiles a lot – but that could also mean she’s just friendly. It can be confusing sometimes to know the difference. Just so women know, men think that too.
– Mo, 32

Do you think flirting crosses a line if you’re in a relationship?
Not if it’s not sexual. I flirt with everyone, not because I’m attracted to everyone, but it just comes naturally. I don’t even think it’s flirting, really. Just being friendly. Especially to beautiful women. But I do flirt with everyone, if I have a girlfriend or not.
– Peter, 44

No. If I think she’s flirting with me first (that doesn’t happen too often, I’ve been married for 30 years), and it seems innocent, then I’m sure I respond in kind. I’m married, not totally oblivious. My wife and I trust each other implicitly, however, and we know what we’re doing here.
– John, 52

What’s the worst flirting experience you’ve had? (The following stories are anonymous, rightly so)
I had a few too many pops at a wedding and told a hot bridesmaid who was rather shy that I was going to blow her mind. I just kept saying that over and over again. ‘I’m going to blow your mind!’ I was trying to impress her, or maybe I was trying to convince her that I would be a good guy to hang out with later. I liked her. Whatever I was doing, she was so embarrassed by it that she left the reception early. I did email her to apologize for being a drunk loser, but she didn’t write back.

In university, I had some classic flameouts. My buddies called me the Stingman instead of wingman because I chased women away. Luckily, I met an incredible woman who agreed to marry me! Once I tried to flirt with this girl I had a thing for in my [Geoffrey] Chaucer class by reading my passage with a perfect accent (we had to read aloud with an Olde English dialect every week). Imagine me reading my Chaucer proudly with my perfect accent and my really geeky clothes and, I admit it, I carried a briefcase. I stared at her the whole reading and I think she was totally creeped out by it. Needless to say, nothing happened between us.