Is TV making you unhappy?

When I was a kid, I was a champion television watcher. I could sit in a basement and watch sitcom after sitcom, from Growing Pains to the Hogan Family. 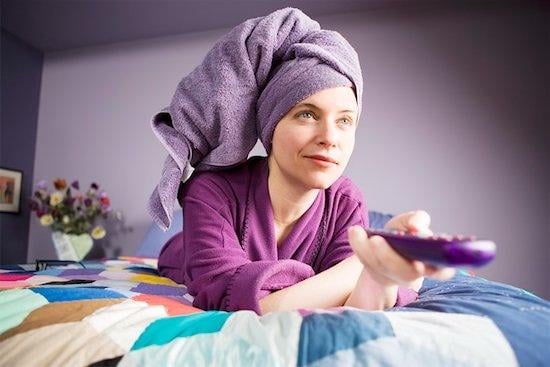 When I was a kid, I was a champion television watcher. I could sit in a basement and watch sitcom after sitcom, from Growing Pains to the Hogan Family. In the summers, my parents had to drag me out of the house to summer camp and sundry other activities, where I stared blankly at my peers, wishing that they would turn into DJ Tanner or Murphy Brown. TV was my entertainment. It was my friend and moral advisor. And it was also responsible for the brief, but unfortunate period in my life where I believed that Blossom was a perfectly reasonable fashion role model.

But as I’ve gotten older, I’ve been watching less and less TV. Part of it is a lack of time, and another part is a lack of decent, corny, optimistic, family-oriented programming. But much of it is a lack of interest. I’ve started to realized that watching TV makes me feel restless and bummed out. A recent story by Alice Park over at Time – Want to Live Longer? Turn Off Your TV – explores new research that found that mortality could be predicted by how much television someone watches. The more TV someone watches, the more likely they are to die early. Park writes that every hour of TV that participants watched after age 25 was associated with a 22-minute reduction in their life expectancy. And she adds that watching a lot of television is as detrimental to longevity as smoking or too little exercise.

Of course, the causal factors here are unclear; maybe people who are uniquely sickly and defeated. But the truly weird thing is that, increasingly, I can feel the seconds of my life ticking away when I’m watching TV. I’m not trying to get preachy here. I do, from time to time, love to lie on a couch and watch a whole season of The Wire or Damages or some other high-drama programming. I’m just saying that a form of fatigue now sets in when I watch a lot of television, and I feel restless and even lonely in a way that I don’t when I’m doing other activities alone, such as reading a book or riding my bike or listening to the radio while baking cookies. It’s become a more hollow exercise, and it’s taken me a while to realize that.

The remedy here is clear: less TV and more of that other stuff. And, on those nights where I am too exhausted to pick up a book or a baking sheet, and if there’s a particularly enticing episode of Project Runway available online, I just have to recognize that feeling of antsiness when it crops up and turn off the tube.