Is this the weirdest diet tip ever?

A new study suggests that chewing your food — to be exact, chewing each mouthful 40 times! — will make you eat 12 percent less and feel fuller. 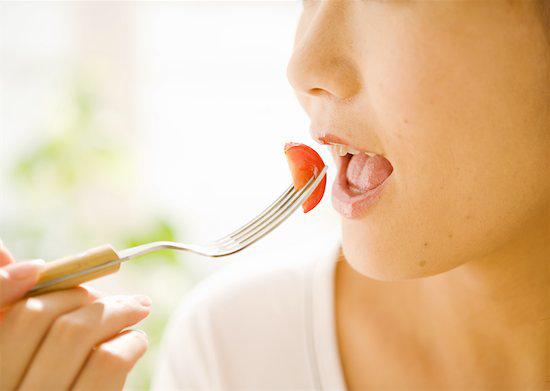 A new study suggests that chewing your food — to be exact, chewing each mouthful 40 times! — will make you eat 12 percent less and feel fuller.

While this exact prescription might be a little over the top, the science behind it is interesting: Researchers asked young men to chew their food 15 times or 40, and found that chewing more resulted in lowered levels of ghrelin, an appetite stimulant, and raised levels of CCK, a hormone that suppressed appetite.

Previous research on the subject have been inconclusive, and this study started by watching average-BMI participants and obese ones with a hidden camera to see how many times they chewed their food, and found no difference.

And although it “illustrates a positive relationship between chewing and gut hormones that have a role in appetite, it would not address foods that we do not chew that contain a lot of calories such as sugar beverages, soups, popsicles and ice cream,” says Theo Phillips, a registered dietitian in Saskatoon. In addition, it only looked at 30 young men, so results shouldn’t be generalized to the average person.

Chewing your food has entered folklore as a way to improve digestion — many a grandmother has passed along the idea that it’s best to chew 24 times. “The Fletcher Diet,” where you chew each mouthful 100 times, was even a fad in the Victorian era.