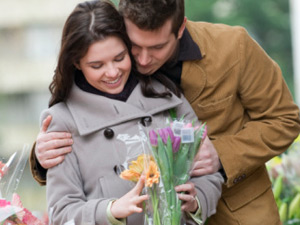 Of course romance isn’t dead – something swoon-worthy is happening right now, somewhere, to someone. Some lucky someone. If you’re a woman in love, the possibility of romance exists all day, every day because someone out there loves you, too. If you’re a single woman, romantic encounters become less of a sure thing. But, according to the men we spoke to, romance is indeed alive and well. It just might look different.

What is romance, anyway?
Men and women can both agree that romance isn’t material things or actions. ”I think it’s a feeling more than something you do or make happen. If you’re with someone and you both feel the same way about each other, romance just happens,” says J.D., 36. “There are things you can do that are called romantic, like flowers or buying her favourite chocolate bar,” he says, “But I would rather do something original, and that takes time and thought. So I might not buy you flowers, but I will plan a weekend away to Quebec City.”

Are flowers too much?
“Flowers to me are nice, and I know girls like them, but I just don’t do it that often,” says Mike, 30. “It just seems like too much effort unless she’s your wife or girlfriend.” Other men echoed the issue of effort, saying that while they want to impress a woman on a date, flowers are over the top. Some women, like 41-year-old Alison, agree that it’s too much. “I’d think he was trying too hard, but that sounds so silly. I mean, they’re just flowers, but it’s almost like pressure to have a good time. How can you not have a good time with the nice man who brought you flowers?,” she says.

New world, new rules
Technology has changed the way we communicate. Texts, instant messages, emails – the idea of a “love-fax” even popped up in the Sex and the City movie – they all make it simple to edit our correspondence until it’s perfect. We can fix spelling errors (though “I hart u” is still a sweet sentiment) and decide we’ve said too much before hitting send, (thank goodness). All of the men we spoke to admitted to sending a text or email as a romantic gesture, and many admitted that it can sometimes be easier to flirt with a woman electronically rather than face to face.

So, are you a romantic?
“I always open doors for my girl, I stand up when she leaves the table, send her flowers for no reason because she’s my queen and deserves to be treated as such. However, I guess that means I’m implying I’m a king, but that’s a whole other session,” says Chris, 34. Many guys said yes, but were quick to make clear that they were averse to the all-dreaded clichÃ©. “Some of my exes have said I’m not romantic, but I think small things are romantic. Like remembering to buy milk and killing spiders and bugs for you. So, I’d have to say yes,” says Baron, 36.