Is being too clean making us sick?

Here's the truth about over-sanitizing 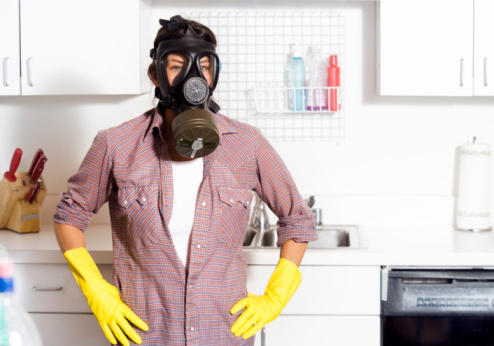 We’ve all seen them: ads with little kids running around a clean-looking house, while unbeknownst to mom, tiny germs lurk on every surface, waiting to attack. “I hate those ads,” says Kathy McCoy, assistant professor of immunology at the University of Bern in Switzerland. Bacteria are part of our normal environment, she says. Obsessively trying to sterilize every surface not only doesn’t work, but researchers speculate that over-sterilization could lead to antibiotic-resistant bacteria.

Sure, the TV images of germs could disgust anyone. And aiming to keep your home neat and tidy is not a bad idea. But how clean is too clean? Research shows that we actually need some bugs in our bodies in order to have a healthy immune system.

The “hygiene hypothesis” has been around since 1989, when British researcher David Strachan showed that exposure to infectious germs in early childhood meant a stronger immune system later in life. The problem, says McCoy, is that this isn’t just about dusting: It also includes “how many siblings you have, whether or not you go to daycare, and if you have pets. All these things affect how many bugs you’re exposed to.”

Consider this: in some Western countries, allergies — which are your immune system responding to things like pollen or cat dander as though they are dangerous attackers — have risen 200 percent in the last three decades. However, they remain low in countries where keeping everything gleaming clean is less of an obsession.

It’s not just allergies, either. Multiple sclerosis, juvenile diabetes and other autoimmune diseases are all on the rise — and researchers speculate that our need for clean may be part of the reason.

The hygiene hypothesis isn’t the only reason to re-examine our clean routine. Health Canada advises against the overuse of antibacterial soaps and household cleaners because they may cause more problems than they solve. Overusing these products can not only lead to antibiotic resistance, but research has shown that people who use them are just as likely to get sick as the rest of us.

Here’s a good rule of thumb: Keep your hands clean (by using regular soap and alcohol-based hand sanitizers), but leave the antibacterial products off your household chore list. And that’s the dirt on dirt.

Turns out you can knock out a cold by eating well – Some nutrients fuel our fighters better than others. Add power to your diet with our top picks:

Why it works Zinc is an essential mineral for building and activating T cells, the white blood cells that attack and destroy viruses and other antigens. Even mild zinc deficiency has been shown to weaken our ability.
Best sources Oysters deliver the most, but crab, meats, dairy, nuts and legumes are also sources. Adult women need about 8 mg a day; one or two oysters do the trick nicely.
Try it tonight Pita pizza with hummus and mint, Korean beef bulgogi, Roasted cauliflower with tahini

Why it works Selenium is a mineral that enhances the cellular response to antigens, specifically by helping cells communicate with each other.
Best sources Brazil nuts — grown in selenium-rich soil — are full of the stuff: One is all it takes to give you what you should have in a day. Fish, shellfish, meat and brown rice also deliver.
Try it tonight Salmon cakes with lemony snow peas, Swiss chard with brazil nuts

Why it works It enhances immune function, making T cells more effective and less likely to attack healthy cells.
Best sources Fortified dairy and salmon will give you vitamin D — as will soaking up the sunshine.
Try it tonight Salmon cakes with lemony snow peas, Creamy ham and pea fusilli

Why it works This dietary fibre helps activate a number of cells essential to the immune response, like T cells and B cells.
Best sources Mushrooms, oats and yeast are all sources.
Try it tonight Mushroom-barley pilaf