I'll tolerate you winter running. But you can't make me like you.

Things have been a little happier in my house lately. After we got home from our Jamaica trip, all four of us were in a wish-we-were-still-in-Jamaica funk. But after that passed and reality set in, the hubby and I set to work. On our running. 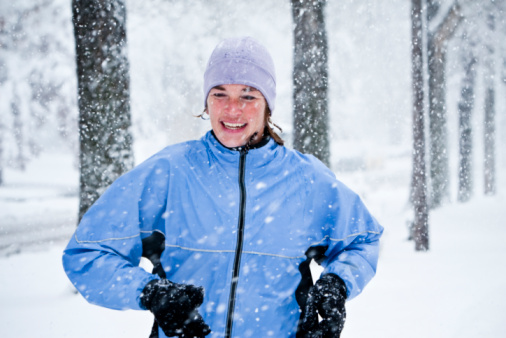 Things have been a little happier in my house lately. After we got home from our Jamaica trip, all four of us were in a wish-we-were-still-in-Jamaica funk. But after that passed and reality set in, the hubby and I set to work. On our running.

See, both of us have races lined up to get us motivated—me, a Sporting Life 10K. The hubby? Well, something more ambitious—the New York Marathon to continue to mark his year of turning 40. He’s got some serious races in his running resume: the Chicago Marathon, the Toronto Half-Marathon, the Ottawa Half-Marathon plus other assorted five and 10ks. But New York is his Holy Grail of races.

So with him putting our running plans in place and us sticking to them—four days of running a week at various times—there’s a happy little runner’s high buzzing around our house. Less flopping on the couch after the kids are in bed exhaustion barely keeping our eyes open for 30 Rock on PVR. More running playlist creating and measuring our distances and times and mopping off sweaty brows and comparing runs.  We feel better and that makes us happier and our house happier.

Then this week—the cold hit. With wind chills in the -20 region all week, it’s been a nippy challenge to get outside and hit the slippery pavement. With the snow, and the ice and the face-chipping wind, we’ve really had to tap into our race motivation to get going. And while I generally turn to the hubby for all advice running—he writes about running (check out his NY training blog here), reads about running regularly, surfs running sites—I thought I’d ask him in between bites of his breakfast bagel smeared with peanut butter, for his best winter running advice. Here’s what he has to say:

* Think nose not mouth. As in breathe through your nose and not your mouth when you’re running because it gives the cold air a chance to warm up in your nose cavity before it you’re your lungs.

* Go slow and small. Running slow and taking smaller strides lets you stay in control as a runner, minimizing your chance of slipping on the ice and snow.

* Bundle, bundle, bundle—in layers that is. Think moisture-wicking clothes closer to your body, windproof clothes on the outside “Because you never know when you head out how fast you’ll heat up or if you turn a corner and hit a wall of chilly wind,” he says.

* Make a loop. On really cold days, run in a circle or loop route rather than just head out to a distance and then run back home. Running in a loop gives you a chance to get home faster if you just can’t make it anymore or the cold is too much.

* Remember to enjoy it. “I enjoy winter running because it’s excuse to slow down and concentrate on things like my running form,” he says. “And sometimes it’s nice to run on fresh snow because it’s softer to run on.” Think ahead—come April when the fair-weather runners come out to play, you’re already ahead with your running base.