Can Two People Who've Been Vaccinated Hug Each Other?

Theoretically, the answer to the question should be a qualified yes, but new information—especially about the new variants—has experts counselling caution. 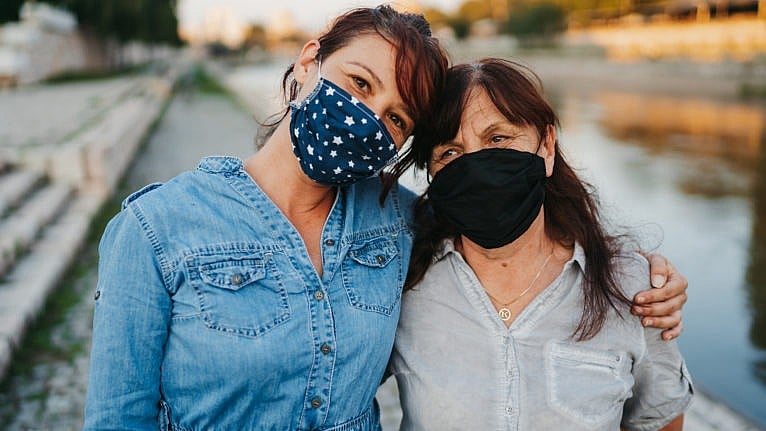 “Can I hug my mom if we’re both vaccinated?”

It’s one of the most common questions that Dr. Tara Moriarty gets during the daily Zoom sessions that she and other expert volunteers have hosted since early January to answer questions about the safety of COVID-19 vaccines. It’s also personal. Moriarty is the designated caregiver for her mother who is in a dementia ward of a retirement home. As more long-term care residents and their essential caregivers are vaccinated, they represent the first large group of Canadians who can dream of hugging each other, unencumbered by distancing rules or layers of PPE.

Theoretically, the answer to the question should be a qualified yes, as the two approved COVID-19 vaccines in Canada, from Pfizer and Moderna, are around 95 per cent protective against symptoms of COVID-19. (On Dec. 11, after the Pfizer vaccine had been approved for use in Canada, Moriarty, who runs an infectious diseases research laboratory at the University of Toronto, tweeted her hope for what life would be like after both she and her mother were fully vaccinated: “I’ll be able to hold her when she cries, sleep over, be the daughter she needs.”)

But now, new information about the vaccines, the disease itself and its new variants have changed Moriarty’s answer to the “hug” question since that optimistic tweet in December. At least for the time being, hugs may be a step too far, especially if one of those in the embrace is elderly. “It is kinda heartbreaking,” Moriarty says, “Everyone’s been looking forward to hugging.”

In the past weeks, “a lot of the data came out in a storm and…it took a while for all the different layers to sink in,” says Moriarty, who is also involved in Science Up First, a social media effort by experts to stop the spread of COVID-19 misinformation that has already reached 13 million users since mid-January. “We don’t know if these vaccines will prevent the spread of the virus [to other people],” she explains. “We cannot afford to be wrong. Say the first people who are vaccinated are in LTC homes and retirement settings—if we let our guard down and there are people who did not develop a good immune response or were not vaccinated, we could still be facing serious issues with spread [to those without full immunity].”

The other huge question revolves around the new variants, especially those from Britain, South Africa and Brazil, which are fast becoming dominant strains around the world, and which are gaining growing footholds in Canada.

“I think the thing that may change the assessment of whether vaccinated individuals in a [non-public] setting can interact normally is whether or not there are variants of concern in the community,” Dr. Lynora Saxinger, an infectious diseases physician in Edmonton, explains in an email to Maclean’s. “A specific mutation may increase the likelihood of re-infection after natural infection…and also might decrease the likelihood of fully protective vaccine efficacy. So if you were in a place that is either not screening adequately for variants, but there’s active transmission—or if there’s known to be variants of concern in the community—staying cautious with distancing and masking likely would be preferred.”

Saxinger, who, like Moriarty, was more optimistic about the possibility of hugging back in mid-December, also thinks there should be enough data released in the coming weeks to “seriously change our idea of vaccine effectiveness in real life.” Moriarty concurs. “We will know more in the spring, and we can make better decisions.” Indeed, early data from Israel, which is far ahead of the rest of the world in vaccinating its most vulnerable populations, suggests that the Pfizer vaccine does indeed reduce viral loads and thus protects against spreading infection to others.

“Can you hang on for a few more months, and then we’ll almost certainly have data to make a decision?” Moriarty asks of the essential caregivers among the 3,000 people who have taken part in her COVID-19 vaccine safety Zoom calls. The near universal reaction has been, “Yeah, we can do it; what’s a few more months at this point,” she recounts. Still waiting for her first dose, Moriarty wears full PPE when visiting her mother, who has received both doses.