How to trick yourself into losing weight

Gaining weight? Blame your crisper, your dinnertime routine, and even your flatware, says psychologist Brian Wansink. But check out the happy flip side: simple tricks like downsizing your dinnerware can subconsciously push you to eat less and losing weight. 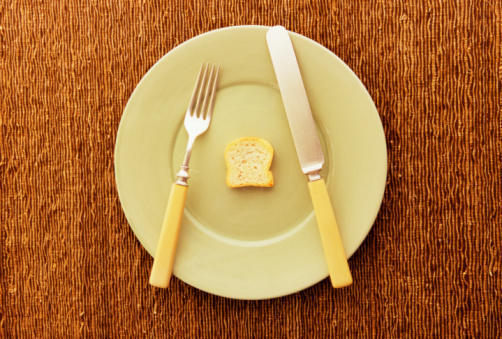 Gaining weight? Blame your crisper, your dinnertime routine, and even your flatware, says psychologist Brian Wansink. But check out the happy flip side: simple tricks like downsizing your dinnerware can subconsciously push you to eat less and losing weight.

The Cornell University professor presented his tips at a recent American Psychological Association convention for losing weight. Wansink has tested the influences of the environment on how much people eat, and his numbers are astonishing: people eat 16 percent more out of larger bowls, 50 percent more of things labelled “low-fat,” 20 percent more when eating off larger dinner plates, and 50 percent more when serving meals family style.

It’s not all bad news, he says: By changing your environment, you can eat less and feel full. (He’s actually created a diet around the concept and written a book, Mindless Eating.) Make switches like eating off salad plates rather than dinner plates, sitting down at the dinner table to dine, and putting fruits and vegetables in the middle of your fridge, and he says you’ll lose about two pounds a month.

Those situation-based behaviours are also responsible for cravings, says Dr. David Macklin, founder of weightcare in Toronto. It’s often based on location and time of day. “People will sit down on a couch in front of a TV at 9 p.m. when it’s dark outside and they’re finally relaxing, and their brains will recognize this as a scene that they’ve associated with eating. And at that point they’ll stand in front of the cupboards looking for something, or they’ll look into the fridge.”

Recognize when you overeat, he says, and you can avoid the cues that drive you there in the first place. “When you’re sitting at the dinner table, plates are being cleared, tea is being poured, that’s the cues for a dessert eater. So remove yourself — go for a walk, and the wanting won’t come. If you’re a night eater, get up off the couch. Don’t go in the lunchroom where the doughnuts are.”