How to take your lumps

There's nothing more terrifying than finding a lump, especially if it's in your breast. Luckily, many of the bumps on our bodies are normal and benign. From lipomas to goiters, these common lumps leave little to worry about. 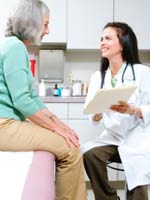 No matter how small a lump is, it’s important to have it looked at. While most of these conditions can wait until your next regular check-up, a breast lump should be examined immediately just to make sure.

Read on if you find a lump or bump on your…

Mucocele
What is it? A soft, saliva-containing cyst in the mouth. Possibly caused by a small trauma to the mouth, like a slip of the toothbrush, saliva pours into the area of trauma instead of into the mouth, causing a translucent, blister-like cyst that feels like a canker. They come on rapidly, can last anywhere from a few weeks to a few years and fluctuate in size. They are rarely painful, until they become so large that they’re uncomfortable.

Don’t worry “It isn’t really a big deal,” says Toronto family physician Dr. Shafiq Qaadri. They most often go away on their own and are not associated with cancer.

Call the doctor if the mucocele becomes painful or so large that it is uncomfortable, interferes with your speech, eating or breathing. It can be removed surgically.

Thyroid lumps
What is it? Swelling in the front and bottom of the neck. The most common thyroid enlargement is called a goiter, which is caused by an underactive thyroid, or hypothyroidism. In those with this condition, the nodule swells because “it’s working hard to help them get the thyroid that they need,” explains Dr. Elizabeth Eisenhauer, an oncologist at Queen’s University. Overactive thyroids can also become enlarged or lumpy.

Don’t worry These lumps are only occasionally cancerous. “Cancer in the thyroid is not very common,” she says, accounting for only five per cent of cases. But, both under- and overactive thyroids need treatment, so it’s best to see a doctor if you’re concerned about a lump in this area.

Call the doctor if after having it diagnosed, the lump suddenly grows or is painless and hard.

Fibroadenoma
What is it? The most common breast lump found in women in their early 30s and younger, a fibroadenoma consists of normal breast and milk gland tissues. Though their cause is unknown, they can range in size from mere millimeters to five or more centimetres and are extremely mobile. They slip away under your fingers and feel firm and rubbery, almost like a marble. They are sometimes tender, especially before a menstrual period.

Don’t worry Because the lump is made up of normal tissues, not abnormal cells, “there’s a less than one percent chance that cancer will occur in that area,” says Dr. Sandra Messner, an expert in preventive oncology at Women’s College Hospital and Sunnybrook Health Sciences Centre in Toronto. If they are very large or growing, they should be removed. Otherwise, these lumps are monitored with ultrasound for two years.

Call the doctor if after you’ve had it diagnosed as benign, it enlarges or changes in any way.

Breast cysts
What are they? A symptom of fibrocystic condition or fibrocystic change, breast cysts occur in more than 50 per cent of all women and are related to monthly changes in estrogen and progesterone levels. They contain fluid and can feel tender, soft or hard, depending on how much fluid is inside. They move easily and can grow, often becoming more painful prior to a menstrual period. Many women experience multiple cysts at once.

Don’t worry Breast cysts are common, especially in the years leading up to menopause. “They’re not precancerous because there aren’t any abnormal cells there,” says Messner. “It’s just a collection of fluid.”

Call the doctor if after you’ve had it diagnosed as benign, the cyst becomes very painful or gets significantly larger, as it may need to be drained.

Lymph nodes
What are they? Small glands in the armpit, neck and groin that help remove bacteria and fight infection. When the body is fighting an illness, these nodes may become enlarged and tender. As for popularity, these are the most common lumps that people feel, says Dr. Elizabeth Eisenhauer, an oncologist at Queen’s University. “One hundred per cent of the population will at some point in their life have swollen lymph nodes,” she says.

Don’t worry If the nodes are tender and there’s an obvious source of infection or inflammation in the area, like a bug bite or a virus, they’re reacting normally, says Eisenhauer. And they won’t turn cancerous. “Cancer can, however, arise in nodes or spread to nodes from other places (e.g. breast cancer can spread to nodes in the arm pit),” so, you should definitely see a doctor if it continues to be enlarged for a long time after the infection disappears.

Call the doctor if the node is painless and hard or if there isn’t any obvious reason, like an infection, for it to be enlarged. Or, if it remains swollen long after the infection disappears.

Anywhere under the skin, especially the face, neck and trunk:

Sebaceous cyst
What is it? A small sac just under the skin containing a white, pasty substance called sebum. It feels hard and moves around freely. They’re often caused by a swollen hair follicle or damage to the skin. They are most often painless and measure a few millimetres in size. They can grow larger than two centimetres.

Call the doctor if after you’ve had the cyst diagnosed, it becomes inflamed, painful or enlarged.

Anywhere, under the skin

Lipoma
What is it? A noncancerous lump of fatty tissue, lipomas are extremely common and very rarely malignant, says Dr. Elizabeth Eisenhauer, an oncologist at Queen’s University. They can appear in any organ in the body, but are most often noticed just under the skin. Of unknown origins, a lipoma looks like an elevated disc, feels squishy, appears slowly and can be as large as four centimeters or more. They’re usually painless and are often hereditary.

Don’t worry “It is a benign condition,” Eisenhauer says of the fatty lumps. And unless they’re in a place that is cosmetically unappealing, they’re rarely removed.

Call the doctor if they come up quickly, are hard or painless.

Face, chest, shoulders and back

Seborrheic keratosis
What are they? Pale or dark brown wart-like bumps on the surface of the skin. Unlike shiny, smooth moles, these bumps have a dull appearance and rough texture. They also have irregular edges. They can grow as large as two centimetres and when picked at, can come off in small chunks.

Don’t worry Because they look so similar to a malignant mole, these bumps can cause a lot of anxiety, says Dr. David McLean, head of cancer prevention at the British Columbia Cancer Agency. But, “the chance of a seborrheic keratosis becoming a cancer is essentially zero,” he says. “They just don’t turn into cancer.”

Call the doctor if you have never had a seborrheic keratosis before and can’t differentiate the bump from a malignant mole. Or, if it is growing quickly or is bleeding. Otherwise, have it checked at your next doctor appointment just to make sure.

Synovial cysts
What are they? Fluid-filled cysts that appear on the front or back of the wrist or at the base or end joint of a finger. They can also appear on the sole of the foot. These cysts, sometimes referred to as ganglions, grow out of the joint and increase in size with activity. They vary in size from so small you can’t see them to large enough that they interfere with regular movement. They are often painless and can be caused by repetitive stress on the joints or rheumatoid arthritis.

Don’t worry “They are benign and they stay benign,” says Dr. David McLean, head of cancer prevention at the British Columbia Cancer Agency. “They have essentially a zero cancer risk.”

Call the doctor if they become extremely irritated, red or tender.