Five ways to take back your health from someone who has

Our latest Fitspiration comes from Adam Hart. A man who worked his way out of depression and obesity to launch a booming lifestyle company. 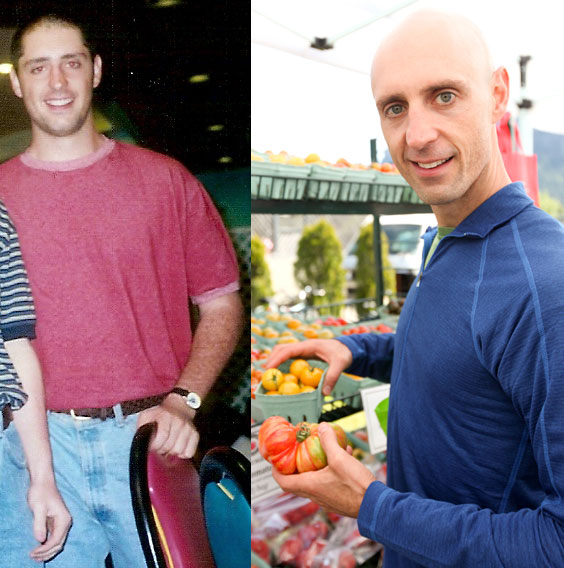 Writer Adam Hart before (left) and after his healthy lifestyle reinvention.

From a very young age, I had an extremely unhealthy relationship with food. Rewards consisted of fast food or junk food and I became dependent on nutrient-void foods. I was a high-energy kid who bounced off the walls, living with a can of cola in one hand, and a chocolate bar in the other.

By age 12, I was diagnosed with attention deficit hyper activity disorder (ADHD). I spent many days in middle school feeling humiliated by being pulled out of the classroom for bad behaviour and started taking Ritalin (while still eating heavily processed foods). Today I know my diet contributed to my ADHD.

In high school, I wasn’t keeping up with other kids. I was overweight and I struggled with low self-esteem. I went to York University and worked part-time at a pizza restaurant, eventually becoming the restaurant manager. I was surrounded by pizza and I ate a lot of it.

I finished university with a degree in sociology and a diploma in International Business Management, but I had no idea what to do with my life. I had no clear vision. I wasn’t living — I was merely existing.

My uncles owned an upscale furniture shop and I joined the family business as the operations manager. Within six months, my stress levels were through the roof. I also was having bouts of depression and panic attacks. To top it off, I was diagnosed with Oral Allergy Syndrome, an allergy to apples, peaches, pears, plums, carrots, celery and nuts. My body was in so much distress it was literally rejecting healthy, unfamiliar foods.

By the time I was 26, I was overweight, stressed, suffering from anxiety and depression and had extreme allergies and asthma. Everything changed the day my doctor handed me a prescription for a high-cholesterol medication. “Start this now or you may be insulin dependent soon,” he said.

This was my rock bottom. It was also my wake-up call.

I wanted to feel healthy and to live with joy and purpose. I knew I needed to change my eating, thoughts and habits.

I started exercising and got into rock climbing. I soon had more energy, lower stress, controllable asthma, less intense food allergies and I saw a reversal of my pre-diabetic state. I stopped feeling angry at being overweight, upset at being depressed and sad for not being able to eat the foods I used to love.

I saved up some money and created a five year plan to recapture my health and take back my life. A year later I moved from Toronto to Golden, British Columbia, to pursue my new found interests in skiing, rock climbing and mountain guiding. It was there I met people who introduced me to new ways of eating, which set me on a new course for my life.

I studied how food worked and spent hours creating new meals using the foods I was learning about, particularly grains, beans, seeds, nuts, fruits and vegetables. Within two years I had gone from being kitchen illiterate to kitchen knowledgeable, and I wanted to share what I’d learned with others.

For the first time, I found my life’s purpose and I was truly happy.

In 2003 I created the Power of Food, a diet and lifestyle program to educate people on how to make healthy food choices. A year later I moved to Squamish, giving me access to world-class rock climbing and Vancouver. Being near a major city allowed me to transition the Power of Food into a corporate wellness company, teaching groups and individuals about plant-based eating.

Ten years later and 2013 was another big year. I wrote a book called The Power of Food and developed a product called Rå Energy – a mix of organic top-quality seeds that you sprinkle on any food to give you sustained energy all day long. I know changing your eating habits is hard and that’s why I designed it — to make plant-based eating something anyone can do.

I’m living proof that it’s never too late to break free of being unhealthy. You can do it too and here are five steps to get you started.

1. Small, daily actions make all the difference
Starting with small steps is the key to great success. It builds momentum and making it easier to stay on track long term.

2. Connect to nature
Even if only for a few minutes, bring nature into your life every day. A plant by your desk, a five-minute walk at lunch, tending an herb garden, all these things have a positive impact on your health. Nature allows us to tap into the calming energy that’s all around us.

3. Use your breath
Breathing exercises are an amazing way to relieve stress and reduce tension. Three deep breaths helps reduce cortisol and decreases inflammation. I began using breathing techniques early on in my healing process, especially when I was stuck in traffic.

4. Add in the good without eliminating the bad
Add in healthy, plant-based foods daily, even if you don’t remove the bad stuff from your diet. I credit this for enabling me to overcome my pre-diabetic state, losing more than 40 pounds and removing depression from my life. It reduces sugar cravings and provides the nutrients your body’s likely lacking.

5. Control your blood sugar
By discovering a few key foods that helped control my blood sugar, I was able to live with more energy every day. Foods like hemp seeds, unhulled sesame and sprouted buckwheat were (and still are) the main ones. Quinoa is another, and dark green leafy vegetables like kale and spinach really changed things for me. This extra energy led to being more active and began a process where I started questioning the bad foods I was eating.