How to choose a healthier lunch meat, and 6 key ingredients to avoid

A sandwich with a couple of slices of deli meat is a cheap and quick brown-bag lunch, but the health warnings are clear: Processed meats have been linked to increased risk of cancers, diabetes and heart disease. 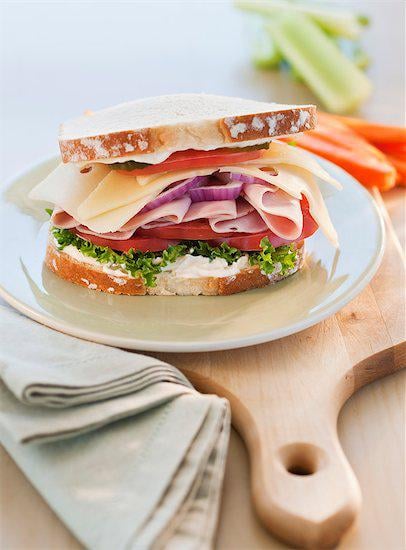 This post was originally published in June 2014 and has been updated.

A sandwich with a couple of slices of turkey and cheese is a cheap and quick-to-prepare brown-bag lunch, but the health warnings are clear: processed meats have been linked to increased risk of cancers, diabetes and heart disease. A new statement from a World Health Organization research agency classified processed meat — including bacon, hot dogs and lunch meats like salami — as carcinogenic. It also found that eating 50 grams daily increases the risk of colorectal cancer by 18 per cent. Yikes.

Should we avoid processed and deli meats altogether, or are there any deli meats that are “safe” to eat?

We contacted Joy McCarthy, holistic nutritionist, author and owner of Joyous Health for her thoughts on the subject and how consumers can make wiser choices.

What do you make of the statement from the World Health Organization linking processed meats to cancer?

As long as you source good-quality meat then eating it once per week is not going to increase your risk for cancer. Good-quality meat means grass-fed and/or certified organic. Also worth considering is an animal’s nutritional profile is the direct result of what that animal eats. Therefore, factory-farmed animals raised on grains such as soy that may be GMO and treated with pesticides will have a different nutritional makeup than cows grazing on a pasture. It is important to eat a predominantly plant-based diet to counterbalance any negative effects of meat consumption. More fibre in one’s diet means less likelihood for cancer.

Related: 7 popular, healthy seeds and how to use them

Which is healthier: chicken, ham, turkey, bologna or roast beef? Is there a huge nutritional difference between each?

Bologna is basically cooked sausage made of cured beef, pork or a mixture of the two with added spices, salt, chemicals and preservatives — avoid! Ultimately, there isn’t much difference between any of these factory-farmed processed meats. The difference nutritionally is whether it’s certified organic or factory-farmed meat. Animals that are raised on a pasture tend to have a higher ratio of omega-3 fatty acids, and are fed food free of pesticides.

Which is the healthiest type: smoked, cured, salted, oven-roasted, or straight-cooked?

The processing of the deli meat doesn’t really matter because they all contain similar harmful ingredients, such as nitrates, to preserve the meat.

What ingredients do you think we should be avoiding?

Make sure your food always contains ingredients that you know, and can pronounce! Here is a list of ingredients you should avoid:

Also, be conscious of excess sodium. For example, Maple Leaf Natural Selections turkey has 570 mg sodium per serving, which is nearly half of our daily recommended intake (1000 to 1500 mg)! And keep in mind that food manufacturers are not required to list all the ingredients if they fall under spices and seasonings — something to keep in mind when you’re eyeballing the Cajun chicken or the honey-smoked ham. If you have common food allergies, check for wheat, soy, or milk products, which are sometimes added to deli meats. If you have digestive problems, it’s best to avoid carrageenan, which is a common ingredient.

Related: Get the recipe for Jamie Oliver’s mega veggie burgers

There are some brands that market their product as “preservative-free,” but the preservatives are just disguised under a different name. What so-called “natural ingredients” should we be on the look out for?

Cultured celery extract seems to be the most popular choice for the “natural” selections of deli meats. However, it still contains the same amount of potentially carcinogenic nitrates and, in some cases, more than brands that aren’t listed as “natural.”

When ordering from the deli-counter vs. buying pre-packed brands (where the list of ingredients is shown), which types of meat should we ask for?

Look for roast beef or chicken at the deli counter, where you can actually see that they are cutting the meat from the animal. Avoid the pre-packed stuff if you aren’t certain where it comes from, and if you don’t see the ingredients listed at the deli counter, make sure to ask the staff.

Joy advises that eating processed meats should really be kept at a minimum — on rare, special occasions. Instead of buying luncheon meat, try roasting a chicken on the weekend and use the sliced chicken instead. Or if you’re short on time, you can buy an already roasted chicken from the supermarket, then slice and sandwich.