How to be a happy mama

I still remember that early winter day six years ago. I was waiting at a red light with my then-seven-week-old in the backseat—sleeping maybe? Crying likely?—and I spotted these girls. 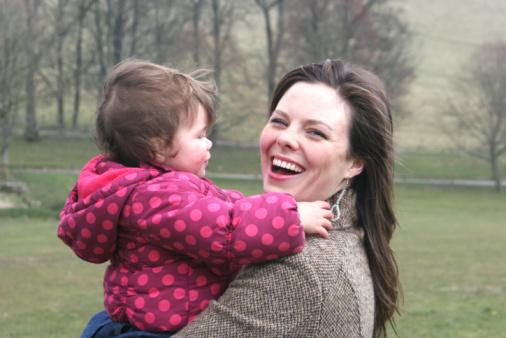 I still remember that early winter day six years ago. I was waiting at a red light with my then-seven-week-old in the backseat—sleeping maybe? Crying likely?—and I spotted these girls. These stroller-less girls who looked a few years younger than me, were sporting Starbucks lattes, cute purses and were chatting busily as they walked across the light in front of my Toyota. I watched them cross, and then stop to look in a shoe-store window. Then suddenly, I saw green…as in envy. Look—they don’t even have to push a stroller around! They can carry a coffee—hell, they can get a coffee at Starbucks and not worry about a wailing baby! They can buy shoes whenever they want!

It was a startling moment for me, then brand new to motherhood and clearly having some trouble adjusting to my new, colicky appendage. New to the gig and with only one family member in the city for support, I was feeling burdened. Alone. Stuck.

Six years later, I’m in a much better place. I’m happy being a mom (despite the fact that I pretty much live in yoga pants). It took some years of adjusting undoubtedly, and that’s not to say I’m thrilled with being a mom 100 percent of the time–especially when my two-year-old is screaming his guts out in the middle of the library about not wanting to go to the potty. The sibling squabbles, bedtime bedlam, schoolyard skirmishes and more can get to me and bring out my inner Oscar at times.

All of which has got me thinking lately about being a happier parent. Because it’s such a mood setter—when I’m happy, it sets the family off on the right foot for the day. (And it’s not just me…basically if anyone in the family is in a really bad mood, they take the family down with them.) But when I’m a happy parent, I’m a better parent—more prone to pinning down my kids in tickle fights, or taking them to the park and helping them with the monkey bars. So when I came across Dr. Christine Carter’s pledge for 100,000 Happier Parents by July 1, 2011. I thought, great idea, but what’s that going to do? Just because we sign a pledge to be a happier parent, will we be?

So I called Dr. Carter, a sociologist, author of Raising Happiness: 10 Simple Steps for More Joyful Kids and Happier Parents, a book full of ideas and anecdotes on how to bring more joy to your family, to find out more. “For me, this campaign came because I wanted to raise awareness about happiness and parenting,” says Carter who also teaches an online Raising Happiness class. “It’s also meant to be a fun thing. And we know that while intention to do something isn’t everything because you’ve got to have skills and practice, intention is a lot. Just taking that first step forward is the most important thing. I just wanted to make that first step really easy for parents.”

So what’s one other step that we could take to make ourselves happier parents? Practice our gratitude, Carter advises. Be it amongst ourselves where we sit and think at the end of each day of three things we’re grateful for, or we discuss it with our families at the end of the day what we’re all grateful for, it’s all about getting in the habit of remembering what you’re thankful for. “Gratefulness is one of those things people don’t think is a skill nor needs to be practiced,” she says. “But there’s plenty of research that shows that when you consciously practice being appreciative and not only model it for your children and help them practice it, it leads to a real blossoming of joy.”

And if they’re thankful because they’re getting butterscotch pudding for dessert, hey, it’s a start right?