How much training is enough? My triathlon challenge

I've been writing about training for a triathlon in fairly broad terms, but today, let's get down to the nitty-gritty details. How much swimming, cycling, and running must one do before signing up to complete a triathlon? Realistically, how much is enough? 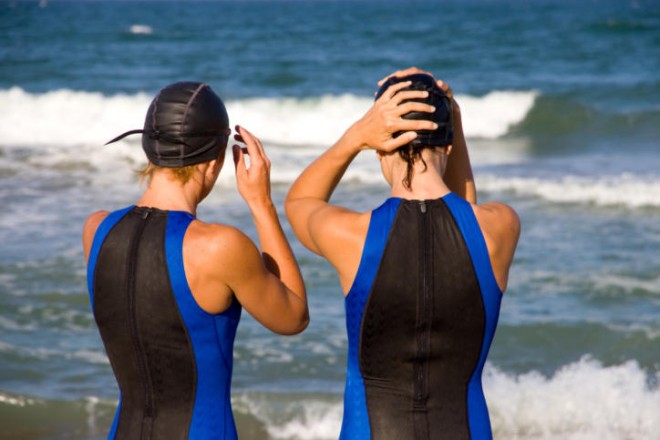 I’ve been writing about training for a triathlon in fairly broad terms, but today, let’s get down to the nitty-gritty details. How much swimming, cycling, and running must one do before signing up to complete a triathlon? Realistically, how much is enough?

As you’ve already guessed, there is no absolute answer, because it depends on the individual: races are of varying lengths, and everyone has different goals, and is starting from a different fitness level.

Though I can’t give you a training plan tailored to your goals or fitness level, what I can offer is a sense of how much time and commitment it takes, week by week, to train for an Olympic-length triathlon (ie. swim 1500 metres, cycle 40 kilometres, and run 10 kilometres).

My original goal was simply to complete the race; and my starting fitness level was fairly average — somewhere above couch-potato and somewhere below people who enter ten-kilometre races for fun. Along the way, my training has changed as my fitness has improved. My goal, with the race in less than a week, remains completion, though in the back of my mind, I have a rough idea of what finishing time to expect, barring flat tires or technical glitches (I’ll give you a hint: it’s not going to put me near the front of the pack, but I won’t be a straggler either).

For people starting from scratch, note that training time and intensity builds slowly, week by week, and even month by month. For the first three months of this challenge, I ran no more than three times a week, usually for eight kilometres or less.

In January, with about six months left to train, I began swimming twice a week for an hour each time; as my fitness improved, I increased my speed, but not the time spent in the pool. In February, I added an hour-long spin class, and in spring, took my bike outside instead, and increased my time: up to two hours. If I can manage it, I get out on my bicycle twice a week.

In March, to gain endurance, I added a long, slow Saturday morning run. I built up gradually from ten kilometres to twenty, adding a kilometre or two each week; once I hit that mark, my long runs fluctuated week by week depending on my time and energy: more than ten, but less than twenty. At the same time, I added a quick-paced five-kilometre run once a week, immediately followed my swim. This helped my body adjust to doing two different activities one after the other. It also maximized my work-out time: I tacked on an extra half hour to an already-scheduled outing.

With a month left to train, I added a second speed-training run following my second weekly swim. I also run for a couple of kilometres following the cycling, to accustom my legs to the sensation of running through a brick wall that affects most people after a hard bike ride. (Fun!) And I squeeze in two yoga classes a week, to reap the benefits of stretching, and to train my mind to remain calm and focused.

Finally, I have gone for several lake swims to practice using my borrowed wetsuit.

What it adds up to, right now, per week, is approximately two bike rides, five runs, two swims, and two yoga classes. Athletes training toward the Ironman would do much more; others training for shorter races would have leeway to do much less.

No week has been quite the same. The final push toward the start line is taking a lot of focus and commitment, but it’s been a gradual journey to get here. My body can handle what I’m asking it to do. And it’s not the same body I started with, all those months ago: it’s stronger and faster. I’m starting to believe that this is a body that can complete a triathlon.