How food allergies convinced one woman to open her own bakery

Awareness of food allergies have risen, but the allergies themselves seem to be going up in number at the same time. It's estimated that five to six percent of Canadian children and three to four percent of adults have a food allergy. 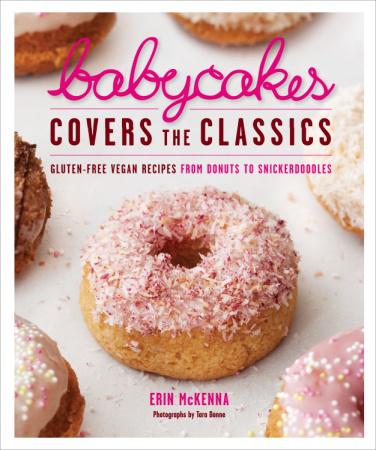 Awareness of food allergies has risen, but the allergies themselves seem to be going up in number at the same time. It’s estimated that five to six percent of Canadian children and three to four percent of adults have a food allergy. A new U.S. edition of Canadian magazine Allergy Living announced its launch this week, thanks to high demand for information from allergy sufferers.

The nine most common food allergies in Canada are peanuts, tree nuts, sesame seeds, milk, eggs, seafood, soy, wheat and sulphite. Erin McKenna found out she was allergic to two of those — milk and wheat — in 2003 and responded by opening the popular allergy-friendly bakery BabyCakes in NYC. She has just released her new cookbook BabyCakes Covers the Classics, full of recipes free of gluten and dairy.

Q: Baking and desserts seem like a really challenging area to tackle for someone with wheat and dairy allergies — a lot of ingredient switching and recipe adjusting is involved. Why did you decide to focus on that instead of another type of food?

A: I decided to focus on baking because it was more of a challenge and I have a huge sweet tooth. It’s not very hard to prepare a savory meal without wheat, the real challenge comes in baking and creating things that are delicious and crave-worthy.

Q: How hard is it to work around your allergies when you eat out? How do those experiences find their way back into what you do at BabyCakes?

A: Since it has been so many years since I was first diagnosed it’s no longer hard to eat out at “normal” restaurants. You just need to know what questions to ask to find out if there’s any hidden dairy or wheat in things. For example, you might ask, “Is there butter or cheese in the spinach?” instead of asking if there is dairy in it since many people don’t know that butter counts as dairy! I apply this experience to BabyCakes in the way we word things. Instead of just explaining an item to be “dairy free” we say “no dairy, no butter,no lactose, no casein” so everyone knows they are safe.

Q: Do you think it’s getting easier for people with allergies to ingredients like wheat and dairy to eat out, or find substitutions when cooking at home? I get the impression that awareness has really gone up in the past few years, particularly for gluten intolerance/wheat allergies.

A: Yes, it’s getting much easier since most chefs are well versed in allergies now. Supermarkets are carrying a lot more allergen-friendly products and many companies are re-marketing by adding labels like “vegan” or “gluten free” even though the product has always been that way. They know people are looking out for it.

Q: Are most of your customers vegan or dealing with allergies, or do you find there’s a mix between those groups and people who just like the food?

A: It’s definitely a mix of vegan, gluten-free and health conscious but a bit heavier on the gluten-free crowd.

Q: Why did you decide to make the recipes completely vegan instead of simply wheat- and dairy-free? Has that decision helped the business?

A: I decided to make it completely vegan because I don’t want anyone to feel left out.

Q: What’s most rewarding for you about offering foods like these to other people with allergies? Are there particular comments you hear often from them?

A: It always touches me when parents bring in their children and say that their kid has never had a doughnut or a cupcake and they finally get to enjoy one.

Q: You use a lot of grains and dairy substitutes that are often thought of as healthier than traditional ingredients for desserts. Have you found that people have an impression of BabyCakes as a “healthy” bakery, even when they aren’t avoiding certain ingredients because of allergies?

A: Yes, they definitely believe it is more healthy because it is!

Q: Why did you decide to make your new cookbook completely gluten-free?

A: There were a lot of people who were upset that a few of my recipes in the first book used spelt, and to avoid any confusion and to make a broader selection I decided to go all gluten free.

Q: What’s coming up next for BabyCakes?

Check out a recipe for chocolate-chip cookies from BabyCakes Covers the Classics.