How a slow cooker can help you lose weight

My wife doesn’t cook, but she does lots of other stuff. If I were in charge of finances we’d be living in a cardboard box. Food is my domain, and I’m mediocre at it. Well, let’s say I’m “pretty good.” 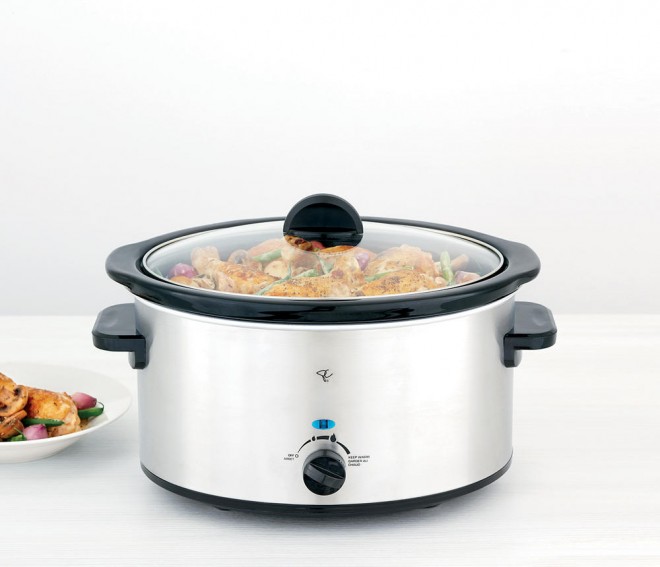 My wife doesn’t cook, but she does lots of other stuff. If I were in charge of finances we’d be living in a cardboard box.

Food is my domain, and I’m mediocre at it. Well, let’s say I’m “pretty good.”

And I just discovered slow cooking, and it’s awesome. With everything I know about the causes of and treatments for obesity, I can see this thing as being a fantastic tool for those looking to lose weight.

Here’s why. Dr. Yoni Freedhoff ran the numbers a while ago and determined that since 1970 we ingest 500 more calories per day and burn 100 fewer. That means the doubling of obesity rates in the same time frame is 83 percent food related, and 17 percent lack of activity related.

Why are we eating so many more calories? Well, mostly because we’re eating out WAY more than we used to. Since 1955 the percentage of American food dollars spent eating out went from 25 percent to 49 percent – almost double. Don’t get me started on portion sizes.

And there is also the fact that eating out is much cheaper now, so that 25-49 percent change is actually way more if you consider total calories. Back in 1955 eating out was comparatively much more expensive that preparing meals at home.

In the last few decades we went from eating out as a rare treat to it being a staple of caloric consumption. We have 24/7 access to fast food. After a hard day at work you just don’t want to hit the grocery store and spend time cooking, so ordering pizza or going through the drive-through is your saviour. Capitalism came to the rescue to give you a break from your harried life, but it made many of us fat in the process. Bummer.

And the slow cooker can rescue you from capitalism. I mean from fast food. I’ll say it again: this thing is awesome. And it’s not just because it makes good food. It’s because it has the ability to dramatically reduce the amount of eating out you and your family do. With a bit of planning and preparation you can always have a stock of easy meals to eat.

I’ve got a family of four, one of whom is a teenage boy. My first endeavor into slow-cooking was a beef stew (Note to self: less Worcestershire next time). For $25 I made enough to feed all four of us three times.

No, we didn’t have stew three nights in a row. That would be gross. I bought some really nice GlassLock containers (expensive, but blows Tupperware away) and loaded the extra in there and froze it. My time to make the stew was 45 minutes – and it was my first time using the thing. I’m sure I’ll get faster. Not only that, but that’s three dinners for 45 minutes work. The stew just needs to be nuked next time. Oh, and it’s also a good way to get kids to eat extra veggies.

There seems to be a whole slow-cooking community out there, and now I see why. This stuff is like yoga with it’s almost religious-like adherents. I’m a convert. When I put on Facebook that I bought a slow cooker people started sending me links to recipe sites and inviting me to join their slow-cooking Facebook pages.

And if you don’t have time to make it in the morning, you can whip it all up the night before and throw it in the pot, cover and put it in the fridge. The next morning all you have to do is put it in the pot and turn it on and it’s ready for dinner. Plus a couple more dinners if your family isn’t huge.

A slow cooker, lots of containers and a deep freeze can make a big difference in how much you eat out, simply because it’s a time saver. If you know you’ve got something healthy and not high in calories stored in the freezer it makes resisting eating out for dinner a lot easier. It is also something you can bring to work so you don’t eat out at lunch.

And if you eat out (or order in) less, chances are you’ll lose weight.