Find out if you should hold onto him or move on 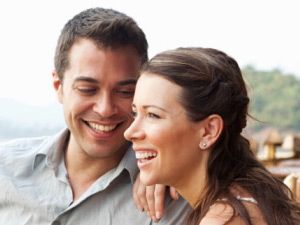 He likes his family
I’m not talking about liking his family so much that he goes home every Saturday with a bag of dirty laundry for his mom to do but you can be assured that a guy who has a decent relationship with his family isn’t carrying around a bunch of mommy and daddy issues that are going to bite you in the butt.

He likes your friends
And I don’t mean like in the way that he wants to sleep with any of them or hits on them when he’s drunk. A guy who recognizes the importance of your female friendships and takes the time to get to know them individually and shows a genuine interest in them says a lot. It says that he is comfortable around women, that he is respects and sees the value of the important people in your life. And it says that he wants to be part of your life and isn’t going to expect you to give up your life and friends to be with him

You like his friends
Just as your friends give him a lot of insight into who you are and what kind of people you like to have around him, if you find out his buddies are a bunch of beer guzzling idiots who sit around making fart jokes, you have to wonder about your guy. If, however, you meet his friends and they take a genuine interest in you and like having you around (as opposed to “tolerating you” because their buddy is making them, it says your guy has good judge of character and likes to surround himself with good peeps.

He makes you feel good in and out of bed
Yes, abilities and agility in the bedroom is appreciated but he makes you feel when you’re not in bed together is just as important. A friend of mine once told me she was talking on the phone one day and her guy dropped to his knees and started kissing her legs because he simply couldn’t help himself. And the best thing, she said, is that he wasn’t doing it with the intention of it becoming sexual, he just wanted to let her know how sexy he found her. Making you feel worshipped and sexy in bed and out will forgive a lot of other less important shortcomings.

He makes you feel smart and respected
Making you feel sexy is essential but if it doesn’t go hand in hand with also making you feel smart, funny and charming, it’s hard not to feel a little objectified. That’s right, a girl likes to be loved for her mind. And it’s not enough if we know he thinks you’re smart, he has to tell you on a regular basis, preferably when you’re least expecting it, like standing in line at a super market or when you’re lounging in front of the TV watching a stupid sitcom.

He knows when to hold his ground
While yes, women want a guy who will treat her like a queen and be nice to her family and friends, there is such a thing as being too nice. Nobody likes a doormat. You want a guy who knows when you’ve crossed the line and will push back a little, respectfully, of course. This makes you feel like you’re dealing with an equal and someone who will call you on your crap.