I’m a fairly recent beet fan; however, I can’t say I’ve made much time to cook with them. Beets always seem like such a pain in the butt to prepare and cook, don’t they? The peeling, the red stains, the roots, the dirt – I used to pass them by for easier-to-prepare vegetables, even though I have grown to love the taste of cooked beets. 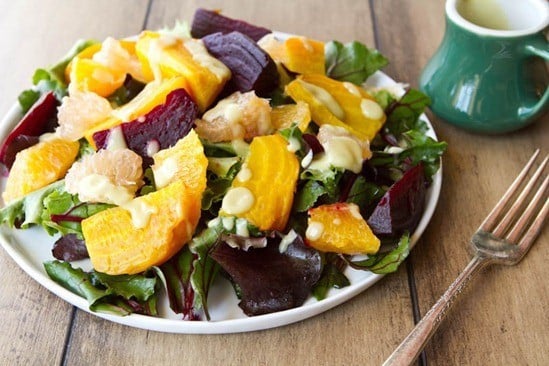 I’m a fairly recent beet fan; however, I can’t say I’ve made much time to cook with them. Beets always seem like such a pain in the butt to prepare and cook, don’t they? The peeling, the red stains, the roots, the dirt – I used to pass them by for easier-to-prepare vegetables, even though I have grown to love the taste of cooked beets.

A while back, some of my readers suggested an easy way to prepare beets that has forever changed the way I look at them. I used to peel beets before roasting them and then some of you told me to do the opposite. Little did I know, after the beets are roasted, the skin just slips off when you rub it with your fingers! I’ve also heard that you can do the same thing when you boil them.

It’s such a simple change in method, but for some reason it made the world of difference to me. I now roast beets once or twice a month…instead of…never. I like to roast at least five beets at a time so I have plenty of leftovers to throw into salads during the week. This citrus beet salad is a great way to pack in beets and a perfect way to start enjoying them again.

According to World’s Healthiest Foods, beets are anti-inflammatory, rich in antioxidants, support detoxification, and are high in folate, manganese, fibre, potassium, vitamin C, iron, and more. A handful of reasons to dig in! And feel free to add nuts, seeds, grains, etc. I also suggest using a grapefruit on the sweeter side (such as a ruby) or just leave out the grapefruit if you prefer.

Directions:
1. Preheat the oven to 425F. Trim both ends of each beet and wash well. Place a few beets on a large piece of tin foil. Drizzle with oil and wrap up. Do the same for the other three beets on another sheet of foil. Place on a baking sheet and roast for 45-75 minutes, until a fork pricks through fairly easy. Check beets after 30 mins of roasting, and every 15 minutes thereafter. Cooking time will depend on the size – my beets took 60-75 minutes.
2. With oven mitts on, carefully open the tin foil and allow to cool for 5-10 minutes. Now peel off the skin (Chatelaine has a nice trick to avoid stained hands) and discard. Slice beets into wedges.
3. While the beets roast, prepare the citrus. De-pith and slice into segments (as shown in this post). Set aside. Reserve the scraps of juicy flesh as you can use this to squeeze into your dressing.
4. Blend the dressing ingredients together in a processor. I used my mini processor and it worked well. Adjust seasonings to taste, adding more sweetener, juice, or salt if desired.
5. To assemble, add greens (I used a mix of baby romaine and blanched beet greens), followed by the beets and citrus segments, then top with nuts, seeds, and/or cooked grains, and finally the dressing.

Angela Liddon is the creator of Oh She Glows — an inspiring, healthy vegan recipe website — and one of Chatelaine’s Women of the Year 2011. Angela’s passion for healthy vegan food is contagious and she’s eager to show others that vegan (and often gluten-free) food can blow your taste buds away.