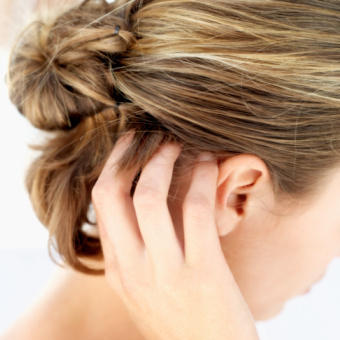 Got an itchy, flaky scalp? It could be plain old dandruff or you may have a common chronic skin disease, called psoriasis which causes itchy red patches and dry scales to appear on the scalp, elbows, knees, trunk and other parts of the body. Psoriasis is often hereditary, according to the Psoriasis Society of Canada; if you have one parent with the condition, your risk is about 10 percent and with two affected parents, the risk is 30 percent.

Psoriasis causes In people with psoriasis, the white blood cells called T lymphocytes or T cells become overactive, stimulating immune response changes that lead to an increase in healthy skin cells. The new skin cells move to the skin’s outer layer too quickly and the old cells stay heaped on the skin and build up into thick scaly patches. Experts aren’t sure why T cells don’t work properly in people with psoriasis but genetics and the following environmental factors appear to play a role.

• Stress Psoriasis may be worse during stressful periods and clear up when you’re rested and relaxed.

• Hormones Psoriasis is more likely to occur more often or worsen during puberty and peak again after menopause. During pregnancy, the scales often improve but usually return after childbirth.

• Medications Certain drugs, such as anti-inflammatories and beta-blockers prescribed for high blood pressure can trigger psoriasis.

Psoriasis symptoms There are many different types of psoriasis so symptoms vary. With the most common form, plaque psoriasis, dry red patches on the skin may have scales that are white or silver in colour; these patches can be painful. If you bathe or shower frequently and scratch your skin, you may also have dry bleeding skin. With nail psoriasis, the nails can change and become thick and yellowish, form ridges or pits or separate from the nail bed. While regular dandruff affects most of the scalp, scalp psoriasis, which also creates flakes, occurs in patches on the scalp and you can feel lumps where the scales are heaped together, which is one way to distinguish psoriasis from dandruff.

Psoriasis diagnosis/tests The obvious skin changes with psoriasis make it an easy condition to diagnose. Talk to your doctor who may refer you to a dermatologist for treatment. In some cases, a biopsy of skin performed under local anesthetic is used to confirm the diagnosis.

Psoriasis treatment With treatment, psoriasis plaques may disappear completely or be limited to a few areas such as the elbows and knees. Depending on the severity of your psoriasis, your doctor may recommend the following treatments:

• Medications Topical treatments, such as retinoids and corticosteroids can be massaged into the skin. Sometimes medications are prescribed orally or  injected directly into psoriasis plaques to hasten recovery. Ointments can help relieve itching so you won’t be as tempted to scratch.

Psoriasis prevention If you have psoriasis, it may be possible to reduce the severity of the flare-ups with healthy habits:

• Diet and lifestyle Eating a balanced diet, avoiding too many cocktails and humidity may help reduce attacks or lessen their severity. While a little sun exposure is good, too much can worsen psoriasis so you shouldn’t spend prolonged periods in the sun unprotected. And avoid stress since it can trigger attacks.

• Follow your doctor’s orders Use your medication as prescribed and try not to scratch your skin.