Can PMS (and PMDD) be beat? Learn coping mechanisms to improve your symptoms. 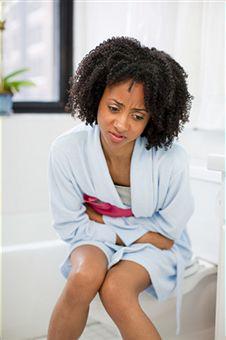 If you notice that you’re bloated, craving junk food and mad at the world the week before your period starts, it’s probably premenstrual syndrome (PMS), which describes a group of physical, emotional and psychological symptoms. The common condition affects four in ten women. Premenstrual Dysphoric Disorder (PMDD) is a mental disorder affecting three to eight percent of women, with more severe symptoms of depression, anger and irritability that interfere with a woman’s relationships and daily activities. Within a day or two of menstruation, symptoms of PMS and PMDD disappear.

PMS causes Changes in hormone levels and brain chemistry appear to play a role in PMS. Diet, activity levels and stress may influence the severity of symptoms.

PMS symptoms There are a wide variety of PMS symptoms which may vary from month to month. Common ones include depressed mood, irritability, anxiety, bloating, lack of energy, breast pain and swelling, headache, difficulty sleeping, trouble concentrating, food cravings and clumsiness. PMS symptoms are more severe with PMDD.

PMS diagnosis/tests There’s no lab test that will confirm you have PMS but once you hear confirmation that the condition is causing your symptoms you might find it easier to deal with them. To help your doctor diagnose PMS, keep a diary of your PMS symptoms and the times of the month they occur during your menstrual cycle, which will help your doctor make the diagnosis.

PMS treatment Eating a balanced diet with foods rich in complex carbohydrates, such as whole grains, may help relieve mild symptoms. Symptoms can worsen with stress, so getting enough sleep and engaging in regular exercise and relaxing activities may be helpful. Nonsteroidal anti-inflammatory drugs (NSAIDs), such as ibuprofen, may help relieve cramping and breast tenderness. Oral contraceptives have been shown to relieve some symptoms. In more severe cases of PMS and for PMDD, antidepressants may be prescribed. Some women may only need them during the last two weeks of the menstrual cycle.

PMS prevention Eat a healthy diet, limit alcohol, sugar and caffeine and get regular exercise and enough sleep. Research has shown that taking 1,200 mg of calcium daily helps reduce PMS symptoms. Magnesium (360 mg/day) may help reduce the swelling of PMS. Vitamin B6 (50 mg/day) and evening primrose oil (400 mg) may also help some women but the scientific evidence for these treatments is weaker.