Brought on by hormonal changes following childbirth, PD affects between 50 to 80 percent of women with varying degrees. 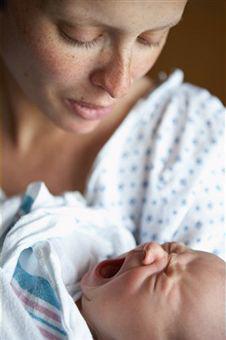 Coping with a newborn, breastfeeding and a lack of sleep can be enough of a challenge and some new moms are also at risk for postpartum depression, the illness that occurs in new mothers after delivery and causes anxiety and a depressed mood. According to the Canadian Mental Health Association, between 50 and 80 percent of mothers experience the most minor type of postpartum depression, “baby blues”, characterized by weepiness, irritability and feelings of vulnerability, which can last several weeks. An estimated three to 20 percent of births result in a more debilitating condition of postpartum depression that may last several months to a year. The rare disorder postpartum psychosis, which affects one in 1,000 births, causes extreme confusion, hallucinations and feelings of hopelessness.

Postpartum depression causes Hormonal changes that take place during pregnancy and immediately after childbirth appear to contribute to the condition. The stress of having a new baby and sleep deprivation may also trigger depression. Women who have had a depression before becoming pregnant are at higher risk for postpartum depression. Women who experience severe premenstrual syndrome (PMS), lack a support network and who experience stressful events during pregnancy or after delivery may also face an increased risk.

Postpartum depression symptoms Signs of postpartum depression vary depending on the severity of the condition. Baby blues usually start within one to three days of delivery. Signs include crying, sadness, anxiety, irritability, mood swings, feeling vulnerable and trouble sleeping. Postpartum depression can begin any time between delivery and six months post-birth. Signs include despondency, tearfulness, feelings of inadequacy and guilt, intense irritability, loss of appetite, severe mood swings, overwhelming fatigue, hyperventilation, and ambivalence or negativity toward the baby. Postpartum psychosis signs include extreme confusion, fatigue, agitation, paranoia, hallucinations, rapid speech or mania, and attempts to harm oneself or the baby.

Postpartum depression diagnosis/tests If you’re experiencing symptoms of postpartum depression, see your doctor before they get worse. She’ll do a physical exam and ask about your symptoms and how you are feeling. Be honest even if you are experiencing difficult feelings, such as an urge to hurt yourself or your baby. Your doctor may order a blood test to check your thyroid since thyroid disease can mimic postpartum symptoms.