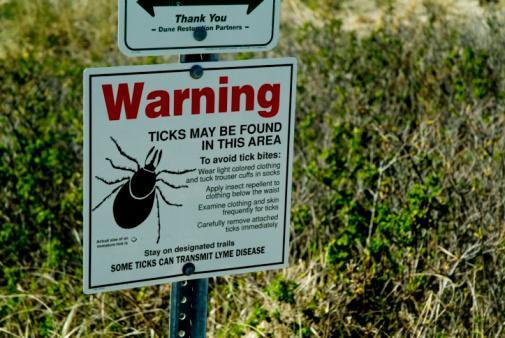 Lyme disease is a disease caused by a bacterium, Borrelia burgdorferi, that can be spread through tick bites. Lyme disease can be treated if defected, but without treatment it can cause serious complications like

Ticks become infected with Borrelia burgdorferi when they squirrels, mice, birds and similar small animals that carry the bacterium. It can then be spread to humans when the ticks feast on us, though it cannot be spread person-to-person. It can also be contracted by cats and dogs, and having pets that go from indoors to outdoors can increase your risk of being bitten by a tick as they can carry them on their fur.

What are ticks?
Ticks are a kind of mite. There are two types of ticks responsible for spreading Lyme disease: deer ticks and the western blacklegged tick. The western blacklegged tick is found in British Columbia, and deer ticks are found in other parts of the country. They can be a variety of sizes, but the ones that cause Lyme disease are generally only a few milimetres long. Ticks feed on animals by attaching to them with their mouths, and they can be picked up by brushing against vegetation.

Symptoms
Symptoms of Lyme disease usually happen in three stages, but not every patient will show every symptom

Stage one: The first sign of Lyme disease infection is usually a circular rash called erythema migrans (EM), which shows up in about 70 to 80 percent of infected people. It will show up where the tick bit you, anywhere from three days to a month after the bite.

Stage two: If untreated when the patient is in the first phase, the second phase of Lyme disease can last for several months. The symptoms may include:

Stage three: This stage could last for months or years, with recurring arthritis and neurological problems, if Lyme disease remains untreated. Lyme disease-related fatalities are rare.

Diagnosis and treatment
Diagnosis is made with an evaluation of the patients symptoms, and a blood test to detect the antibodies to the bacterium can also be used.

Lyme disease is treated with antibiotics, as is more effective the earlier it is started. Most cases of Lyme can be cured within two to four weeks, but more severe cases may take longer and require intravenous drug treatment with antibiotics.

Where the ticks are
Planning to take a hike? Recent studies show Lyme disease is on the rise in Canada – and your risk for exposure is highest in regions where the blacklegged ticks that transmit the disease are already established:

In Quebec: Tick populations are highest in parts of the Monteregie and Estrie regions in the southeast of the province.

In Nova Scotia: There are known tick populations in the Lunenburg, Bedford and Shelburne areas.

In Manitoba: Ticks are established in the southeastern corner of the province, but new studies suggest they may also be found around the Stanley Trail in south central Manitoba

In British Columbia: Western blacklegged ticks are fairly widely distributed throughout the province, but populations are largest in the lower mainland, on Vancouver Island and in the Fraser Valley.

Ticks travel by air
Because blacklegged ticks feed on migratory birds, they can be transported throughout the country and so it is possible you could become infected with Lyme disease almost anywhere in the country.

If you are venturing into the woods (especially from late spring to early fall), here are a few extra precautions you can take: