Symptoms, causes and treatments for this all-too-common ailment. 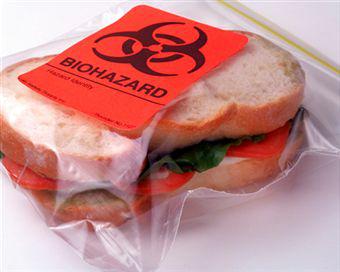 Taking a chance on that three-day-old potato salad might seem like a safe bet until you find yourself spending the night chained to the toilet with a bout of food poisoning. Food poisoning, or a foodborne illness can occur when you eat food that is contaminated with bacteria, viruses or parasites. There are between 11 and 13 million cases of foodborne illness in Canada each year. For certain people, including pregnant women and people with weakened immune systems, food poisoning can be very dangerous.

Food poisoning causes There are many common causes of foodborne illness, including the bacteria E. coli and Salmonella found in contaminated food, such as meat, poultry and fresh produce. When food is not handled with care or cooked properly, it is possible to ingest bacteria or become infected from contact with someone who is already infected.

Food poisoning symptoms Food poisoning may feel like the flu, with symptoms including nausea, vomiting, stomach cramps, diarrhea and fever. Symptoms may appear shortly after eating contaminated food or up to a month or more later.

Food poisoning diagnosis/tests If your symptoms are severe, won’t go away or you feel dehydrated, talk to your doctor, who will ask you questions to determine the contaminated food you came in contact with. She may also recommend blood tests to see if you have an infection or ask for a stool sample to test for bacteria. If it looks like you have an infection and it appears to have spread to other parts of your body, you may need a computerized tomorgraphy CT scan, MRI or other tests.

• Wash your hands well before preparing and serving food.

• Use a food thermometer to ensure food is cooked to a safe temperature.

• When you’ve cooked meat, poultry or fish, do not place it on the same plate that held the raw met unless it’s been washed thoroughly.

• Don’t eat foods that smell foul or have a strange taste or are outdated. Avoid eating foods from cans that are dented or bulging.

• At salad bars and buffets, be careful about what you eat. Choose salad dressing in single-serve packages.

• When traveling to countries where food contamination is common avoid raw fruits and vegetables and opt for well-cooked foods.