It’s Hay Fever Season—And I’m Miserable. What Can I Do To Fight My Allergies?

Hay fever in Canada typically peaks from May to July, causing itchy, watery eyes, stuffy and runny noses, and even asthma flare-ups. Here’s what you need to know. 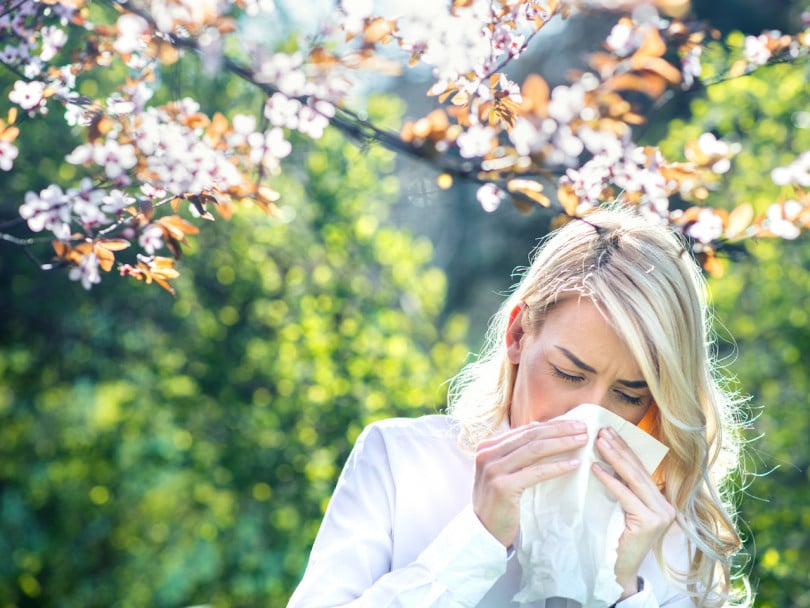 An allergic reaction happens when your immune system overreacts to something otherwise benign. In the case of hay fever (also known as allergic rhinitis), that harmless substance is pollen from grass. “Grass relies on wind pollination, and the little granules of grass are quite small—the perfect size to go into your nose and lungs,” says Jason Lee, a Toronto doctor and specialist in clinical immunology and allergy. As for why some of us are sensitive to pollen in the first place, the causes of allergies are multi-factorial, with genetic predisposition and environmental factors among the usual suspects.

Many people commonly use hay fever as shorthand for all seasonal allergies, but this isn’t quite accurate, Lee adds, noting that the grass pollen referred to in the name is distinct from tree pollen (peaking March to May) and ragweed pollen (August to September), though symptoms can be much the same.

When is hay fever season, and is climate change making it longer or worse?

The prime time for hay fever in Canada is usually May to July, and whether or not global warming is making the season worse is unclear. Earlier spring-like conditions may be extending the window for seasonal allergies. “This is an area of active debate,” says Lee. “In some areas, certainly the pollen counts are up from historical averages, but in others maybe it’s staying the same.” But regardless of how climate change comes into play, the overall prevalence of hay fever, and allergic conditions in general, is undeniably on the rise.

What are the symptoms of hay fever?

Hay fever can come with wide-ranging symptoms: watery, itchy and red eyes, congestion or a runny nose, post-nasal drip, ear dysfunction (the ear connects to the back of the nose, and some people have difficulty equalizing the pressure) and lung issues. Asthma can flare up during peak allergy season.

Are there any effective non-prescription treatments?

Beyond taking medications, avoid allergen exposure when possible, closing windows, cleaning air ducts and wearing wraparound sunglasses to block pollen. Some alternative-health adherents advise eating unpasteurized, unfiltered honey to get small doses of allergen (basically, DIY immunotherapy). But Lee says this won’t expose you to the same grass pollen that causes hay fever—in other words, it’s not effective. And in the worst-case scenario, self-treating in this way—with allergens that aren’t measured or controlled—could cause an anaphylactic reaction. Similarly, although popping quercetin (a compound found in apples, onions and other plants, and also in health-food stores) has become popular, research backing this natural supplement for allergy relief is scarce. “We haven’t done human trials, so you don’t know the side effects,” Lee says.

What are the current allergy medication options?

Hay fever medications include antihistamines, available both over the counter and by prescription. Traditionally, allergy treatment follows a “ladder system,” explains Lee: if one drug doesn’t help, you’d move up the dose, and if that’s still not enough, you’d try a nose spray (such as a nasal antihistamine or nasal corticosteroid). If needed, you can also add prescription eye drops (most over-the-counter versions aren’t appropriate for long-term use). To understand the pros and cons of all your medication options, and what would work best for you, talk to your allergist.

Do you have to switch up the allergy meds you’re taking?

Tachyphylaxis—the technical term for developing a tolerance to a drug—isn’t supposed to happen with antihistamines. Nevertheless, Lee says that patients tell him all the time that their medication has just stopped working. So if you’re taking your daily Reactin to no avail, ask your allergist about other options.

Do allergy medications have long-term side effects?

“There’s no such thing as a side effect–free intervention,” says Lee, noting that some older, first-generation allergy drugs were implicated in heart rhythm problems and sleep disturbances, for example, while some newer medications can make you drowsy. Your treatment should be a joint decision between you and your doctor, based on what potential side effects you’re OK with.

Is there a cure for seasonal allergies like hay fever?

Immunotherapy is the closest thing to a cure. How it works: through a series of injections, or tablets you take under the tongue, you’re exposed to small, controlled doses of your specific allergen(s) over the course of three years. The goal is to fundamentally alter how your immune system reacts to these substances, easing symptoms in the long run. While immunotherapy doesn’t work for everyone, 70 percent of patients get some benefit from it. It’s what Lee considers “the only disease-modifying option”—the one allergy treatment that can lower your need for medication, even after you stop taking it.