Happy and bipolar: One woman's journey to balance

How bipolarity affected Ellen Forney's work, her definition of happy, and the silver lining to her illness. 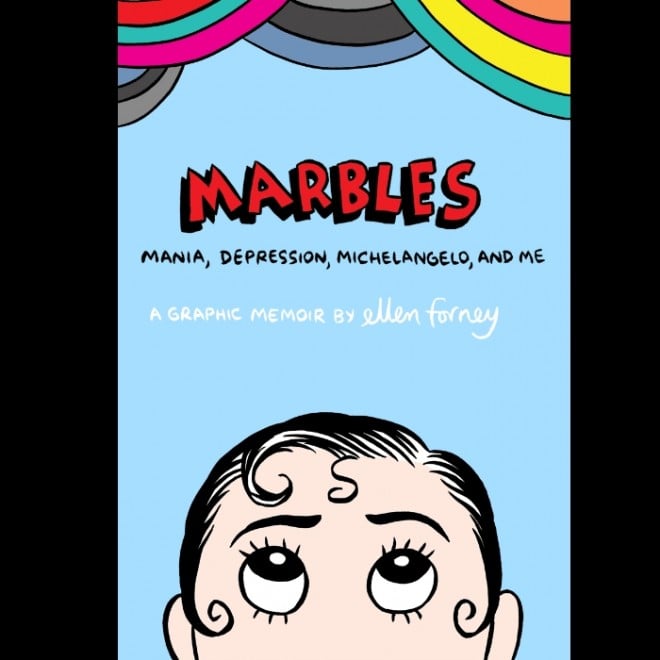 For cartoonist Ellen Forney, years of wildly swinging moods eventually resulted in a diagnosis of bipolarity. In her new graphic novel, Marbles: Mania, Depression, Michelangelo and Me, the Seattle-based cartoonist outlines her struggle to stabilize her moods without flattening her creative drive.

Here, she describes how bipolarity affects her work, how she’s changed her definition of happy, and the silver lining of her illness.

Q: Before you were diagnosed with bipolarity, did you know that something was off about your ability to function on a day-to-day basis?
A: My bipolar disorder had a pattern that’s pretty common. It’s not actually a diagnosable disorder until the cycles get more acute and closer together. Earlier, in my twenties, I can look back now and see that I was really down that semester, but it wasn’t anything that really interfered with my life. It gets more and more pronounced.

Q: Can you describe what the depressive and manic stages were like at the most acute?
A: Both mania and depression have a lot of different aspects to them. Mania, for me, was a lot of energy going out. Not a lot of sleeping, very social and a lot of sexual energy. The kind of mania I had was sort of euphoric. Depression for me was just feeling really sick and low. In Marbles, the art I used for mania was loose and loopy and often spread out across two pages. For depression, it was a lot more stark with limited details.

Q: The depression you describe sounds absolutely crippling, but the manic episodes have a bit of an all-night-party vibe to them. Did you enjoy your manic phases and do you miss them at all?
A: I wouldn’t describe them as entirely happy. “All-night-party” is a good description, in that it feels exciting but kind of out of control. In a lot of ways, it’s an interesting thing to have in my past — that sense of feeling so excited and powerful and interested in so many things. It’s a really good feeling in a lot of ways to be interacting with the world in such an intense way. On the other hand, it’s really hard on your body when you’re not really eating or sleeping for several months. And it’s really hard on the people who are close because you’re a very self-centred bundle of energy. I think it’s easiest for anyone who’s ever done drugs to understand. It’s like being on cocaine, where you feel really great but everyone around you thinks you’re a pain in the ass, and what you’re doing is really unhealthy and exhausting.

Q: It took you four years to find the right combination of medication; can you describe that process?
A: It was hard. It was frustrating. I really had to rely on trust with my doctor. I was pretty self-aware before, but I’ve had to become very conscious of what I’m feeling, how I’m sleeping and eating. To have to take care of myself in this way is a bit of a silver lining. I’ve come to know myself, and I have a lot of tools now for taking care of myself both physically and emotionally. I didn’t feel like my life was on hold, but I did feel like I had something heavy to carry — and at times it was heavier than others.

Q: Can you describe some the of the non-prescription coping mechanisms you’ve adopted?
A: Yoga is a very important part of that. Various vitamins. Swimming and other forms of exercise. My emotional support network of friends and family. And I still see my psychiatrist regularly, and its been 14 years.

Q: Besides the coping mechanisms you’ve gained, do you see any advantages to being bipolar?
A: One of the things I really ponder in the book is the connection between bipolarity and creativity. For me, and probably for a lot of bipolar artists, everything is wrapped up in the same package. It’s a holistic experience. Asking me what my life would be like without bipolar disorder is like asking what my life would be like without my lungs. It’s just such a part of me.

Q: It’s become incredibly popular to see almost everything through the lens of, “Does this make me happy?” Is that how you see things, or do you have a different perspective?
A: I think there’s something to be said for satisfaction and finding a place where you feel like you can thrive and be interested in life and be healthy. If that’s what someone means by “happy,” then sure. But I think there’s a mistaken idea that meds make people happy, and that’s not what it’s about. It’s about feeling centred and able. To just be happy sounds really flat to me. To have a really rich life, you have to have an array of feelings.