Gynaecologists use IUDs. Why don't the rest of us?

Safe, effective and effortless, the IUD is the gold standard of birth control — but only 3 percent of Canadian women use one. What gives? 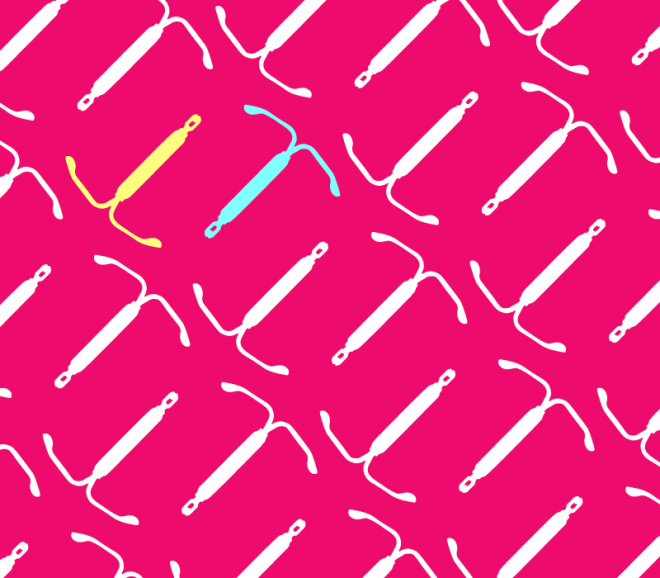 For women frustrated with their birth control choices (the pill is a hassle to remember, condoms and diaphragms can be iffy, and tubal ligation is permanent), the very best option, the one that fans rave about and gynaecologists swear by, is the intrauterine device (IUD). It’s also one of the least-popular methods of contraception; in Canada, only about 3 percent of women who use birth control opt to use one, compared to about 44 percent who take the pill.

Inserted by a doctor into the uterus, the small t-shaped plastic frame comes in two forms: one is wrapped in copper, which causes an inflammation in the lining of the uterus that’s toxic to sperm; the other version, called Mirena, releases a type of progestin that thickens cervical mucus to stop sperm from reaching an egg and it also thins the uterine lining and partially suppresses ovulation. Similar to implants (small hormone-releasing rods inserted under the skin of the upper arm), once they’re in place, IUDs are 99 percent effective at preventing pregnancy and last for anywhere from three to 10 years. Once removed, your body returns immediately to its baseline level of fertility.

Dr. Erika Feuerstein of the Bay Centre for Birth Control at Women’s College Hospital in Toronto calls IUDs “brilliant.” It’s the only form of contraception she’s used, and she says, “it’s my favourite form of birth control to suggest to patients.” The big advantage is that IUDs are “forgettable contraception” — although the pill is equally effective at preventing pregnancy, it works if women never fail to take it at the same time every day. “IUDs remove the possibility for failure,” Feuerstein says.

Two recent large-scale U.S. studies back this up. The Contraceptive CHOICE Project in St. Louis, Missouri and a state-wide program in Colorado provided adolescent and adult women with free IUDs and implants in an effort to reduce unwanted pregnancies and abortions. The results were staggering: For teenaged girls enrolled in the St. Louis study, pregnancy and abortion rates plunged to less than a quarter of the national level. In Colorado, the teenage birthrate fell by 40 percent and the rate of abortions by 42 percent.

Given these kinds of numbers, why are IUDs so unpopular? One reason is money. Mirena costs $350 and up, while copper IUDs are about $80 to $150. Over time, they turn out to be cheaper than the pill and many healthcare insurers cover the cost, but the upfront fee can be prohibitive if you don’t have private insurance.

Then there’s the IUD’s history. An early model used in the 1970s, called the Dalkon Shield, was “a disaster,” according to Feuerstein. “It looked like a crab and if it imbedded itself in the uterus, women had to have hysterectomies to get them out.” If that weren’t bad enough, the Dalkon Shield had a long braided tail made of string that enabled bacteria to travel up it into the uterus causing infections. This creepy image continues its hold on the imagination of plenty of women, she says. “There are patients who are just freaked out by the idea of having something inserted into their body.”

That background has also created a bias among doctors. A 2008 study published in the journal Canadian Family Physician found that general practitioners had major misconceptions about the safety and effectiveness of IUDs. For instance, it used to be believed that IUDs led to higher rates of infections and pelvic inflammatory disease but this is no longer the case. The newer IUDs are safer and don’t carry the risks of the Dalkon Shield. As well, the widespread use of IUDs in the 1970s coincided with the sexual revolution — and as people began to have more sexual partners STIs became more common. Many of the infections attributed to IUDs in the 1970s were actually contracted by having sex without condoms. Today, aside from a slight chance of infection from the insertion procedure, IUDs are not associated with higher risks for infection or pelvic inflammatory disease. There is even evidence associating IUD use with lower rates of endometrial and cervical cancers. Here’s another endorsement: Some of the most devout users of IUDs and implants in the U.S. are gynaecologists and other family planning providers. (It’s like that old Sy Sperling Hair Club for Men ad, “I’m not only the president, I’m also a client.”)

However, many doctors are unfamiliar with the newer research and are reluctant to recommend IUDs. One patient, who received an IUD from Feuerstein, was previously refused the procedure by three separate physicians. “Counselling is key,” she says, “I would encourage any woman interested in an IUD to talk to her family physician first because many of them are supportive, and then try a centre that specializes in birth control if that doesn’t work out.”

Which isn’t too say there aren’t some cons to using IUDs — there is a low risk (one in 1,000) for perforation of the uterus, discomfort during insertion and, with the copper version, some women experience heavier and crampier periods. (Mirena has the opposite effect — it lightens periods.) Like the birth control pill, IUDs and implants don’t protect against sexually transmitted infections, such as herpes, chlamydia and HIV.

Still, compared to the benefits of IUDs, those concerns seem minimal. Given that one of the benefits of contraception is freedom and a sense of control over your body, then IUDs have it all — minimal risk of side effects, nearly 100 percent effectiveness, no impact on fertility and, best of all, they are utterly forgettable. Ladies, what are you waiting for?