Gwyneth Paltrow on her health scare and new cookbook

The film star and lifestyle guru explains the incident that inspired her to completely rethink what she eats and how she cooks for her family. 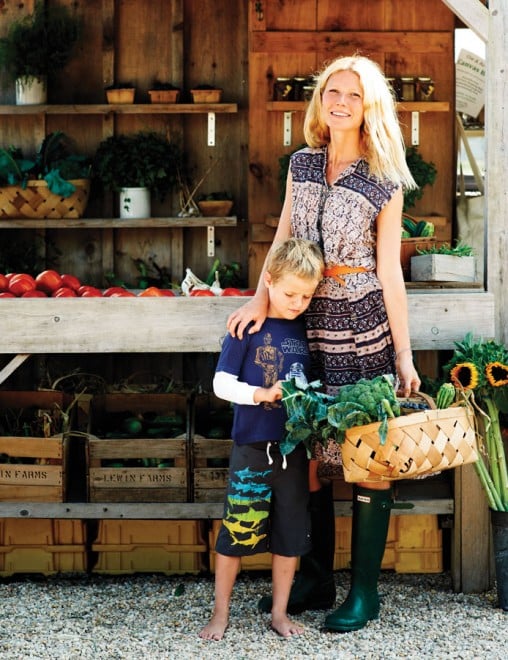 Gwyneth Paltrow is one of life’s Good Girls. When she was awarded her Oscar, she wept without self-consciousness. When she became a mom, she declared herself ‘besotted.’ When her father was dying of cancer, she began a macrobiotic diet, in a quest to ‘heal him by proxy.’ But it’s not all automatic — at least as far as the healthy eating goes. ‘I’m a real bread and cheese person, corn chips and salsa…’ she declares adamantly on the phone, when I call to talk to her about her new, healthy-eating cookbook It’s All Good, which is published this month.

It all began when she was having lunch with friends in her garden, one sunny weekend a couple of years ago. She realised she was feeling awful, then collapsed, with severe pains in her head and numbness in her hands and limbs. She thought she was having a stroke. ‘I was extremely scared,’ she says now, ‘my kids were running around the garden and I was on the ground and I didn’t know what was happening.’ It turned out that she was shattered from an overextending schedule and not enough nourishment. She was put on an elimination diet by her doctor, to allow her body to heal. At the same time, she found out that her family was either allergic or intolerant of a litany of everyday food. ‘I looked at all the things I couldn’t eat and thought, this is a nightmare, I’m a cook, I’m an eater, I hate this.’

She decided to turn the negative into a positive and look at all things they could still eat, and base their family cooking on delicious but highly nutritious ingredients. Out of this, came the new book. ‘The whole idea was to come up with food that you would never know you were cutting anything out, really delicious comfort food that happens to be very healthy.’ Is she on a mission to get everyone to eat better? ‘You know, you never want to preach. But I have a son who has bad eczema, and is allergic to gluten, dairy and hens eggs, and when you see the blood work before and after, and you see the eczema disappear, you think wow, it really is is beneficial to eat better. It’s not like I’m the first person saying this.’

Having her own family has, she says, completely changed her life. ‘I’ve always been the caretaker but I think it’s made me change my approach. There are so many different manifestations of how you can look after somebody, and food is such a big one.’ Being in the kitchen on an everyday basis is important to her. ‘I find it very grounding to have my hands in food,’ she says. And the home life around the table that she sketches out is unnervingly normal. ‘We always eat all the weekend meals together,’ she says. ‘During the week I’ll feed the kids earlier and cook for us later — they come home from activities and they’re starving but I find that if I give them a snack they won’t want to eat after.’ Like every mother in the kitchen, she too can get bogged down in lowest common denominator cooking — the same six meals that everyone likes, going round and round again. ‘Everybody gets stuck in that,’ she agrees. ‘I try to have a meal that they love and stick something new in there. Like tortillas and guacamole with rice and beans, and then something new on the side like a mango salsa.’ She believes, too, that giving kids an element of control over what they eat is important. ‘If I’m making them a rice noodle dish I’ll say come and tell me what you want in it, that way if someone doesn’t want carrots or whatever, they can customize it.’

Her life as a mother is at the very core of her sense of well-being. More than anything, she loves it when everyone is happy and calm in the family. ‘Sometimes we go for afternoon tea on a Saturday afternoon, the four of us, and when everybody’s in a good place and happy, I feel incredibly lucky and happy and the kids are making jokes, you, know, those great, joyful moments are simple.’