Get the skinny on shut-eye

Over 13 million Canadians are overweight or obese, but for those trying to shed pounds, giving up on a full night’s sleep for a 5 a.m. gym session might do more harm than good. 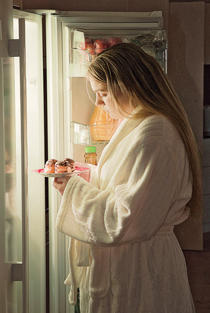 Over 13 million Canadians are overweight or obese, but for those trying to shed pounds, giving up on a full night’s sleep for a 5 a.m. gym session might do more harm than good. Lack of sleep actually increases appetite and drives people to binge on unhealthy “comfort foods,” according to Dr. Charles Samuels, medical director of the Calgary-based Centre for Sleep and Human Performance.

Even so, a growing number of us just aren’t getting seven or eight hours of decent sleep a night. According to results from Scienta’s 2010-11 Symptom Profiler, those who said they got less than four or five hours a night reported the most negative health symptoms — and those who slept over 10 hours didn’t fare very well, either. Unsurprisingly, those with a body mass index (a rough measure of body fat based on height and weight) of over 30, who are technically obese, also had more health complaints than any other BMI group.

Lack of sleep boosts appetite, Samuels says, releasing hormones like ghrelin (which signals hunger) into the system. “The body assumes we’re under stress, and we go into survival mode,” and this drives us to eat more calorie-dense foods. One study, published in Annals of Internal Medicine in 2010, tracked 10 healthy adults who were put on a calorie-restricted diet, and assigned them to sleep 5.5 or 8.5 hours per night; those who got the least amount of sleep also lost less body fat and felt hungrier than those who slept longer. As for getting too much sleep, the effects are less clear, although studies have associated it with higher mortality rates; sleeping too long could be a sign of another underlying health problem, like depression.

“If the goal is weight loss, the number one thing — and this is very clear — is that you’ve got to get the sleep you need,” Samuels says.