Gazpacho: Cool off with this homemade and vitamin-packed recipe

Gazpacho is a Spanish raw vegetable soup served chilled during the warm summer months. It's often made with a base of tomatoes, as well as other in-season vegetables like cucumber, bell peppers, onions and garlic. 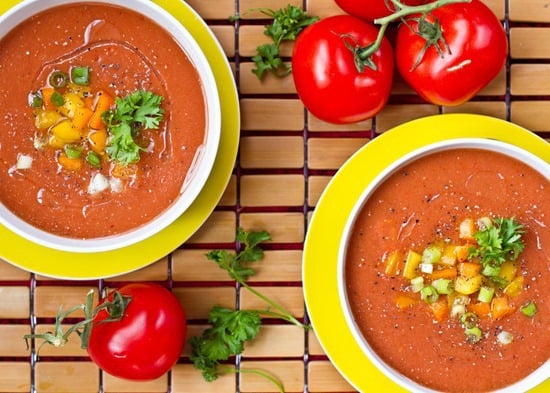 Gazpacho is a Spanish raw vegetable soup served chilled during the warm summer months. It’s often made with a base of tomatoes, as well as other in-season vegetables like cucumber, bell peppers, onions and garlic. August is here and it’s the perfect seasonal dish to enjoy right now. As an added bonus, it only takes 5-10 minutes to whip up.

As healthy as gazpacho is, it was never a dish that really called out to me until recently. There was just something about a cold soup that turned me off. Then one day, I enjoyed a delicious bowl of gazpacho in a restaurant and the rest was history! I found myself desperate to make it at home. After all, my garden was overflowing with vegetables and what better way to use them up?

I’ll admit, my first couple attempts were quite unappetizing and would have probably have kept vampires away (note to self: go easy on the raw garlic!), but as I practiced and found the right combination of ingredients, it quickly turned into a dish I now make all summer long. I like to change up the recipe slightly each time depending on what ingredients I have in stock. I encourage you to do the same. Let’s give it a try:

Homemade gazpacho
Not only refreshing and light during the warm summer months, gazpacho is bursting with nutrition — a ‘salad in a blender’ if you will. Please note, if your blender is on the smaller side you might have to cut this batch in half so it won’t overflow. I made it in my Vitamix and it just fit.

Angela Liddon is the creator of Oh She Glows — an inspiring, healthy vegan recipe website — and one of Chatelaine‘s Women of the Year 2011. Angela’s passion for healthy vegan food is contagious and she’s eager to show others that vegan (and often gluten-free) food can blow your taste buds away.