Wind down after your workout with this inspiring DVD marathon. 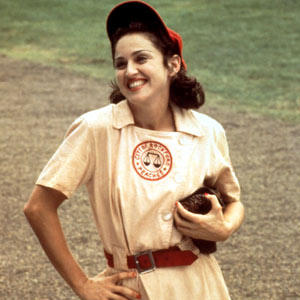 Summer weather really inspires me to get moving. Forget all the pressure of “bikini season” – the warm temps and easy breezes make the idea of taking an evening jog or playing a casual game of basketball so appealing to me. I’ve never been a huge fan of the sports film genre, but give me a kick-ass female protagonist, and I’m in. This weekend is supposed to bring the heat, so grab your water bottle and sneakers and get moving. Then, wind down after your workout (or get pumped up all over again) with this awesome women-in-sports DVD marathon.

Kate Bosworth stars in this drama based on a fantastic article by Susan Orlean. Anne Marie and her pals (including Eden, played by Michelle Rodriguez) are obsessed with hitting the Hawaiian waves and they become even more serious about it as Anne Marie prepares for a major surf competition. She’s got it in the bag, as long as her new love interest (adorable Matthew Davis) doesn’t get in the way.

Notable quotable: “You’re the kind of girl who wouldn’t ask a guy what to do.”

Another one of my all-time favourite flicks. This Penny Marshall comedy (starring Madonna, Rosie O’Donnell, Geena Davis and Tom Hanks) is the best baseball movie ever. Dottie (Davis) is destined for greatness with her whip of an arm, and when she’s finally discovered by the legend/alcoholic Jimmy Dugan (Hanks) she insists on bringing along her competitive sister, Kit. We follow their journey from farm girls to major league pros. The writing and terrific acting (seriously—Madonna is funny!) make for a perfect weekend pick.

This British comedy was the sleeper hit of 2002 in the sports-film genre. A young Keira Knightley plays Jules, a football- (or soccer, as we know it) obsessed teen who wants to go pro. Jess (Parminder Nagra) is equally as talented, but her strict Sikh parents don’t believe women should play sports. Jess ends up joining a girls’ team anyway (coached by Joe, played by Jonathan Rhys Meyers). A great coming-of-age story about family, friendship and overcoming boundaries.

Notable quotable: “Anyone can cook aloo gobi, but who can bend a ball like Beckham?”

This film stars Michelle Rodriguez in one of her best and most memorable roles (it’s been reported that she beat out 350 other actors who auditioned.) She plays Diana, a girl with a serious anger problem who decides to focus that energy into boxing. With her abusive father and most of her peers against her, she sets out to prove the haters wrong. And does she ever prove them wrong. Bonus trivia: Rodriguez spent four months training her butt off for this role, and it shows!

Notable quotable: “Don’t front like I’m some girly girl when you know I’m not.”

I don’t think I’ve ever met anyone who didn’t like this movie. It’s a great romance, starring Omar Epps (another one of my celeb crushes) as Quincy and the beautiful Sanaa Lathan as Monica. The two next-door neighbours meet when they’re kids on a basketball court, both with dreams of playing for the NBA, and become competitive friends. As they get older, their love—for each other, and for the sport—grows stronger. The very best part is how it all turns out in the end (I won’t give it away, but it’s not what you’d expect). Definitely a must-rent this summer.

Notable quotable: “I’d rather wear a jersey than an apron.”