Why we get a "runner's high"

Apparently both humans and dogs get the runner’s high, but ferrets don’t. I wonder what a certain professor at the University of Arizona was high on when he wondered if ferrets could get a runner's high. 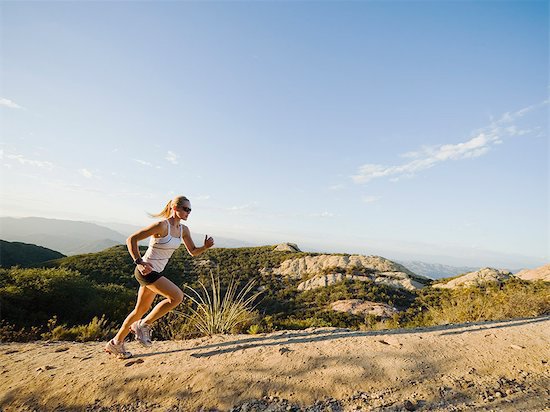 Apparently both humans and dogs get the runner’s high, but ferrets don’t. I wonder what a certain professor at the University of Arizona was high on when he wondered if ferrets could get a runner’s high.

According to anthropology professor David Raichlen, whose study was just published in the Journal of Experimental Biology, humans and dogs get runner’s high because it’s a positive reinforcement mechanism. Running is good for survival. Dogs evolved from wolves, who chased down their prey over long distances. Humans did the same thing.

I recently saw an interesting piece on the Nature of Things about our early ancestors being “persistence hunters.” Essentially, humans are the best long-distance runners of all the animals. Sure, gazelles can outrun us over short and even moderate distances, but we can run them to death! We just need to keep marathoning along until they’re tired and need to rest – that’s when we sneak up and make them into gazelle steaks!

According to the study, runners get an elevated level of endocannabinoids after a run to make them feel all giddy-like. (Note: marijuana is called cannabis because it works in a similar fashion.) This feeling reinforces a love of running, which makes us want to do it.

What’s the deal with the ferrets though?

Apparently they “slink.” They stay in tunnels, sprint for short distances and sleep a lot. Evolution didn’t make it advantageous for ferrets and like creatures to be distance runners, so it didn’t reinforce it with happy hormones. I guess that makes sense.

But here is where it stops making sense.

First, the study used fit people, so perhaps those who run regularly (a small percentage of the population) are those who are more likely to get this runner’s high. Secondly, I wonder just how necessary a happy feeling is to reinforce this behavior from a survival perspective. I would think that not starving to death would be plenty motivation to get our ancestors to chase down food.

Personally, I do not believe I have ever experienced a runner’s high. Yes, I love doing it, but I don’t think it’s like smoking a doobie or chugging absinthe. My enjoyment comes from things like tracking progress, knowing deep-down—at an intellectual level rather than a hormonal one—that I’m doing something really good for my body. I also enjoy checking out the scenery (I live in Calgary and can usually see the Rockies during my runs) and having a sense of accomplishment afterwards.

I never think: “I feel like getting stoned. I’m going for a run.”

Do cannabinoids get elevated during intense exercise? Sure they do. Lots of research shows this. Do we get baked and happy from it? Maybe some do, but I sure don’t. I had to think hard to find my running happiness.

So what’s the point? I’ve talked to plenty of runners who say they’ve never experienced anything like a neuro-chemical euphoria while running, so why are these cannabinoids getting elevated?

I have a hypothesis. I think it’s about pain control. Running hard over long distances hurts. You’re not getting a runner’s “high,” but instead what you’re not getting is a runner’s “Oh-my-god-this-hurts-so-bad-I-want-to-barf.” The endocannabinoids are making the pain and discomfort tolerable.

That’s what I think is really going on. What do you think? Have you ever had a runner’s high?