What cleaning up after a flood is really like

Our fitness expert James Fell shares his experience after helping his hometown of Calgary get back on its feet after the city's worst floods in history. 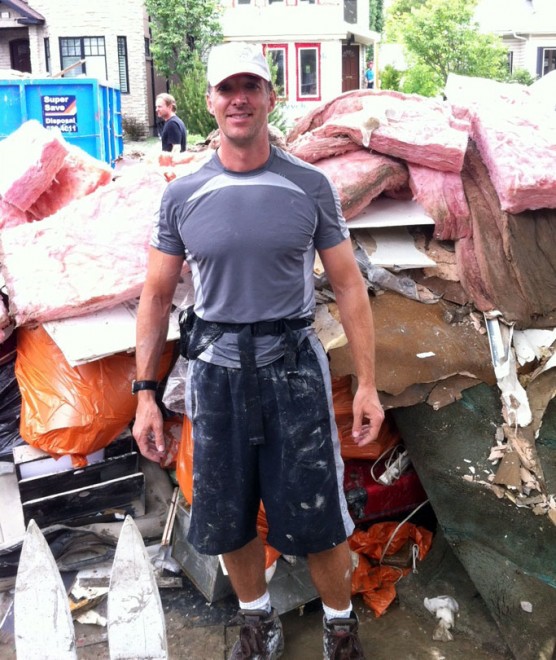 James Fell helps clean up after the Calgary flood, 2013

I feel like I’ve been through a Tough Mudder race, except in this case, the “mud” is sewage.

I live in Calgary, and it’s not a pretty sight right now. My family moved here in 1976, when I was eight-years-old, and I’ve never seen anything like this. If you’re unsure of what I’m talking about, just google “Calgary flood 2013” and you’ll get an eyeful of the carnage my poor city has suffered. Damage in southern Alberta is estimated at close to $5 billion.

But at the same time, we’re learning what it truly means to be part of this community. I’ve never seen such a disaster, but I’ve also never witnessed people pull together like this before.

More than 100,000 people – 10 percent of the city’s population – were displaced by the flood (and it’s not just Calgary, but communities all over southern Alberta). The day after the flood hit emergency shelters were filled with people needing food, blankets and toiletries, so my son, his best friend and I canvassed the neighbourhood for these supplies, loaded up our van, and took them to those in need.

A couple of days later people were allowed to return home and assess the damage. It was time to start the cleanup. On Monday Mayor Naheed Nenshi, who has been tremendous through this crisis, called for volunteers to show up at McMahon Stadium to help with initial cleanup duties. They needed 600, and several thousand showed up.

Calgarians decided not to wait around for organized help, and the municipal government encouraged citizens to find a way to pitch in. Websites and Facebook pages popped up, people posted where help was needed and volunteers of all ages and abilities came out to help.

I have no problem ditching my work as a fitness writer to exercise, but I’d been presented with a different opportunity to burn calories. It was time to do the disaster cleanup workout.

I picked the Sunnyside neighbourhood as it was hit hard. As I began walking towards the houses, where people were cleaning out, I saw a story you can’t get looking at photos online.

The boulevards were piled high with garbage. Every basement had been flooded several feet deep. Most houses were without power and water, so generators ran and Porta-Potties and volunteers were everywhere. It took some asking around to find a place that needed more help. It feels good to write that.

After visiting six or seven houses, Shane the firefighter and Soe the travel agent welcomed me into their basement catastrophe and I began hauling garbage out into the street. Most of it was sewage-soaked drywall, as I’d gotten there towards the end of their cleanup.

An hour or so later their basement was mostly emptied out, and I went off in search of more work. Again, it took a few houses before someone pointed at a house and said, “They were hit hard. Go help them.” 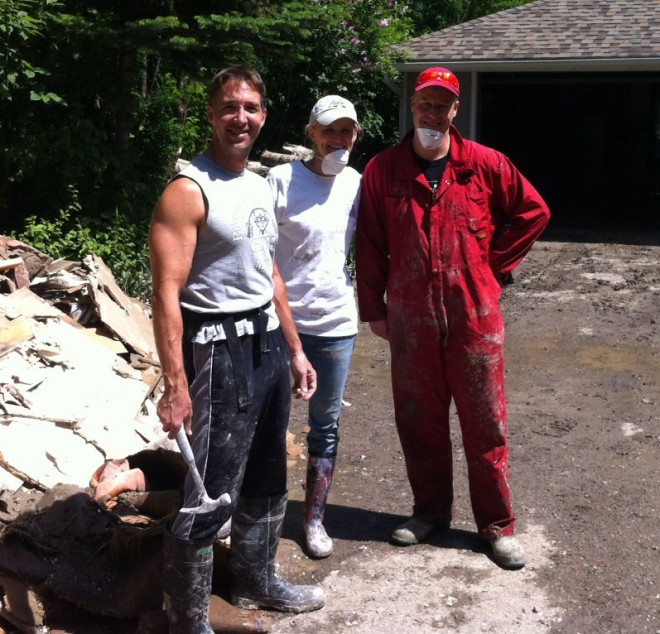 This is me on the second day of volunteering in Bowness with my friends Stephan and Kimberleigh.

So I showed up and offered my services. One guy called down the stairs, “There’s a guy here with big muscles who wants to help.” I had to chuckle. “Send him down,” came the reply.

The place had many volunteers already, but it was a major disaster. They had a large basement that was full of stuff. I took to working through what was salvageable and what wasn’t. It was an elderly couple, and when someone found their water-damaged marriage certificate my heart broke a little.

I spent the next several hours there and made some friends with the volunteers I worked alongside. There was Laura the paramedic and her younger sister Hanna, who is starting high school in the fall. There was Jill the accountant and a family that had driven in from the nearby town of Cochrane to help, plus a bunch of other people whose names I didn’t get.

No one had to worry about going hungry or thirsty, as there was an overabundance of food and drink brought in by volunteers for anyone needing refreshment. After dealing with sewage-soaked garbage for hours I wasn’t feeling hungry, but then the owner of Peter’s Drive-In showed up with burgers, onion rings, shakes and fries.

“Peter’s brought food,” I heard someone call from outside. Jill and I were down in the basement, covered in gore, and looked at each other. “Peter’s?” she said. “I’m going.”

We dashed up the stairs and joined in the impromptu picnic. Me with a burger, and Jill with a shake. Despite the stench I’d been dealing with, it was one of the best-tasting burgers ever. I didn’t have to worry about the calories either because it’s hard work cleaning up after a massive flood.

Facebook is awash with pictures and stories of people volunteering, and although there is much to do, we’re making progress. I spent the next day volunteering in Bowness with my friends Stephan and his wife Kimberleigh (in the photo above), and it was the same scene: Lots of mess, lots of people there to help (including hockey icon Lanny McDonald), and more donated food than you can possibly eat.

We have the Calgary Stampede starting on July 5, and trust me, the show will go on come hell or high water…literally. (Speaking of hell or high water, check out this awesome song by Chelsea Cunningham to rally support for this year’s Stampede.)

If you wish to donate to flood relief, please visit the Canadian Red Cross.

James S. Fell, MBA, is a certified strength and conditioning specialist with the National Strength and Conditioning Association. His syndicated column “In-Your-Face Fitness” for the Chicago Tribune runs in dozens of major newspapers across the U.S., and he also interviews well-known celebrities about their fitness regimens for the Los Angeles Times. Based in Calgary, he’s an avid runner, cyclist and weightlifter, and wishes he had more opportunities to go downhill skiing with his wife and two children. You can look for his first book out in early 2014. Visit his site for a weight loss report.