Want to get motivated to exercise? Enter a charity race

Sign up for a charity walk, run, or ride — nothing gets you moving like knowing you're helping a good cause 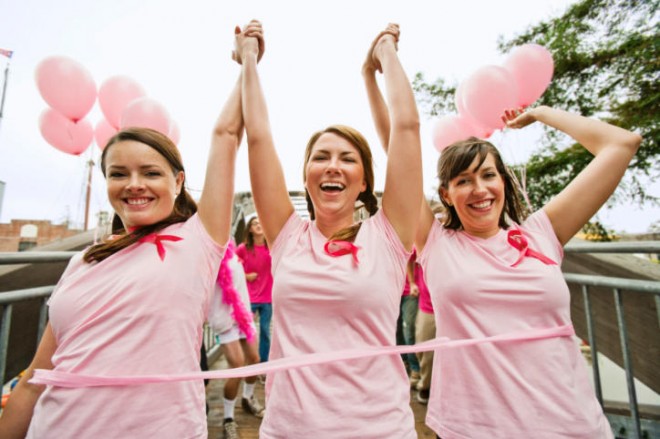 Breast Cancer Awareness Month is coming to a close and I want to give you something to think about for next year.

I’ve written extensively on the subject of exercise motivation, and this LA Times column of mine explains how signing up for a race can be a powerful tool for prompting you to action. Knowing there is a date in the future where you are planning to give it your all — be it a run, bike, swim, or something else — will motivate you to train for it.

I wrote another LA Times column about how being part of a group exercise effort is also great for boosting your motivation — far better than exercising alone.

Well, here is an idea for merging those two bits of advice together: do a race, and make it a true group effort by participating in a fundraising race for a good cause. I’ve done a few charity runs, but I wanted to talk to some really experienced people, so I started with my sister.

Janice Fell is 45-year-old mother of two and a financial regulator living in Calgary. She’s completed six fundraising races or events. She has done the Ride to Conquer Cancer and the Weekend to End Breast Cancer (now called the Weekend to End Women’s Cancers), which aren’t timed races, but are still very physically demanding. She’s also run the Underwear Affair 10K a few times — which is for “below-the-waist” cancers — and dragged me along with her.

Janice has done her share of non-fundraising runs, but asserts, “I do like the fundraisers better. It’s a lot of fun being part of a team.” She enjoys the charity concept, and the constant aspect of raising money for a charity keeps it top of mind. “You’re always thinking about it and getting more and more excited as the event day approaches,” she told me.

“There are also a lot of motivational email prompts about fundraising requirements coming from the organizers,” Janice said. “So you keep getting these reminders that you’re supposed to be training for this. It’s not just like paying a race fee and then showing up on race day.”

The events themselves also have much more of a festival approach to them. It’s not a bunch of runners or cyclists just looking to push themselves. It’s more of a party with a fitness component.

“The Weekend to End Breast Cancer goes by the Tom Baker Cancer Centre and a lot of the patients and staff come out to cheer you on or wave and cheer from the windows,” my sister told me. “It’s a thrilling and emotional experience. On any given street corner you may pass people with signs that say things like ‘You’re running for my mother.’ People say ‘thank you’ as you walk by. It’s all very emotional. I cry a lot.”

I wanted to talk to another fundraising competitor who I wasn’t related to by blood, so next I spoke to my sister-in-law, Lynn Peterson, who is a 26-year-old first-year medical student at the University of Calgary. Lynn just completed the CIBC Run for the Cure for the fifth time, which is a 5K race that raises funds for breast cancer research.

Lynn also gets emotional when she sees young kids coming out to do the run on behalf of their mothers. “It really makes you appreciate your own health.”

And she said that it was great for training motivation. “When the weather is turning and you’re wanting to start staying inside, the upcoming race gets you to go outside and train. It’s definitely good motivation. It’s more involved so I’m dedicated. There is a personal connection to the race that makes you committed.”

Things to keep in mind about charity races

While a good sob, as Janice confessed to, can burn some extra calories, these events aren’t easy. You need to train hard. The Weekend to End Breast Cancer is 60K of walking over two days, and the Ride to Conquer Cancer is 200K over two days.

Janice also told me that some people keep pushing to finish the event — maybe sometimes when they even shouldn’t — because they’ve invested so much time and effort into the fundraising aspect. “They are very committed to finishing,” she said. She also warned that people need to know what they’re getting into from a fundraising perspective. If you don’t meet your minimum goal, then you don’t get to participate. Rules are rules.

For me, I don’t actually like racing all that much because I’m more of a solo runner. I ran a 10K when I was 15; then I broke my ankle a month later and didn’t take up running again for about two decades. Since I started running again as an adult, about eight years ago, I’ve completed only three races and they were all the cancer-fundraising Underwear Affair.

I picked that race because it really is more of a party atmosphere. It’s so much more fun for me, with the wild team names and costumes and the after-party. It’s like having a night out to whoop it up. And even though I’ve near-hurt myself trying to run this race as fast as I can, I still have a great time bonding with my fellow runners over us all working together for a good cause. (If you want to know a little more about the atmosphere of running a charity race, I did a story about the 2011 Underwear Affair for the LA Times.)

My final bit of advice is that you don’t have to find a run specific to breast cancer, or any other type of cancer — if there is a cause that is important to you there may be a walk, ride or run that is a fundraiser. If your motivation is lagging, I can guarantee that committing to such an event will get you moving.