Are you looking to shed a few pounds? We've got advice from someone who's been there, and who's kept it off for almost 20 years. 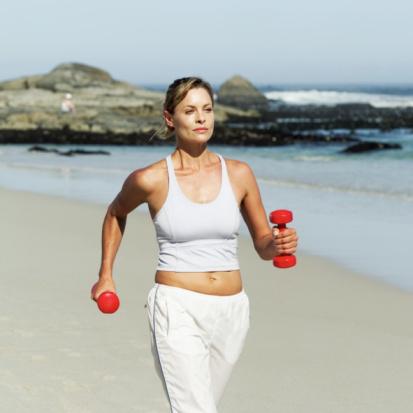 I used to be pretty overweight, and I’ve got the before and after photos to prove it. Many people lose weight and then regain it, but after hitting my high-point at the age of 25 I’ve continued to improve my physique over 18 years, losing around 50 pounds of fat and gaining roughly 20 pounds of muscle.

Normally I focus on scientific research in my articles, bringing in a few anecdotes to provide a bit of context. But in this case I think my personal experiences can offer some useful advice because I’m one of those few people who has both lost a substantial amount of weight and kept it off. So here are my top ten tips that I live by to stay slim:

1. Learn to love exercise: You cannot force yourself to do something you hate day after day, week after week, year after year. You’ve got to experiment and find “your thing.” Then learn it, embrace it, get good at it, do it with friends, and let if define you as a person.

2. Focus on achieving short-term goals: It’s the things that you do each day that lead to achieving your long-term weight loss goals. Print off a new exercise calendar each month and stick it to the fridge, and relish in ticking off each exercise regime as “done.”

3. Embrace vanity, but not too much: Don’t feel bad about wanting to look good, because this is a powerful motivator. I also pursue improved health and performance, but that twinkle my wife gets in her eye when I take my shirt off is very motivating.

4. Don’t give up your quest for looking your best: I can see my abs. Not all of them, but some of them. I’ve got a sort of a “four-pack” rather than a six-pack. Here is the thing: I’m always questing for that six-pack. I’ll admit that at the age of 43, this is a pretty ridiculous endeavour — no one expects a guy my age to be ripped. Nevertheless, it’s that constant, nagging desire to look just a little better that helps me sustain where I’m at. If you focus on just sustaining your weight loss, the fat will quite likely slowly creep back. However, if you are always trying to get just a little fitter, then it can help you stay where you are.

5. Decide that you’re not yet in the best shape of your life: I recently wrote in the LA Times about my quest in to run a 10K in under 40 minutes. I didn’t quite do it, but I will one day. Then I plan on doing a marathon in under four hours. Then I want to do an Ironman. If you’re getting on in years and you were a super athlete as a youngster, then this may not be a realistic goal, but you can decide that you’re going to keep improving and reach a new physical peak for your age.

6. Eat breakfast: I don’t believe that eating breakfast “revs up your metabolism.” However, I do believe that it sets the stage for not overeating later in the day. When you eat breakfast it helps control your appetite because you don’t stave off your hunger until later in the day. There is a phenomenon called “night eating syndrome” where people who skip breakfast, and often skip lunch, end up losing all control of their hunger and keep eating from dinner right until bed time. When you eat properly spaced meals throughout the day you can eat a moderate-sized dinner — and then stop eating after that.

7. Focus on “satisfied” not “full”: It’s pretty rare that I ever feel full. I used to all the time in my younger days, but even after Christmas dinner (which I always cook, and it’s really yummy) I usually don’t need to undo my belt. There is an old Chinese adage that says, “Eat until you are eight-tenths full.” I live this.

8. Try going to bed a little hungry: Remember what I said about eating breakfast? You don’t want to let yourself get too hungry during the day because it makes you overeat at night. However, the one time it is okay to be hungry is when going to bed, because then your appetite resets itself overnight. If you can resist eating a few hundred more calories as an after-dinner snack and go to bed a little hungry, the pounds fall off. This is one of the most powerful weight loss strategies I know.

However, don’t go to bed so hungry that you wake up in the middle of the night needing food. One trick I employ to avoid eating late at night is a hot cup of herbal tea. You can also try brushing your teeth to make yourself think, “I can’t eat anymore because I already brushed my teeth.”

9. Get most of your calories from the grocery store: Eating out is a major cause of obesity because of the high-calorie and processed nature of most restaurant food. About 95 percent of what my family eats, I buy at the grocery store and prepare myself.

10. Focus on low-caloric density foods: One pound of spinach has the same number of calories as a single Oreo cookie. Focus on eating foods that have a big volume and are satisfying, yet contain fewer calories. Vegetables often fit into this category, and so does fruit. Processed foods don’t.

There are no miracle cures in the above, just a lifestyle approach that I’ve learned and adapted over time to become something that I like doing and can sustain. I’ll give you one bonus tip: I’ve made the decision to fight a valiant delaying action against age. I want to look and feel way younger that I actually am right up until the day I become worm food, and I’m willing to work for it.

Good luck on your journey.