The downside of calorie-counting apps and health tracking

From smart forks to flu apps, there’s a device to measure every aspect of your health. But were we better off before we could monitor everything? 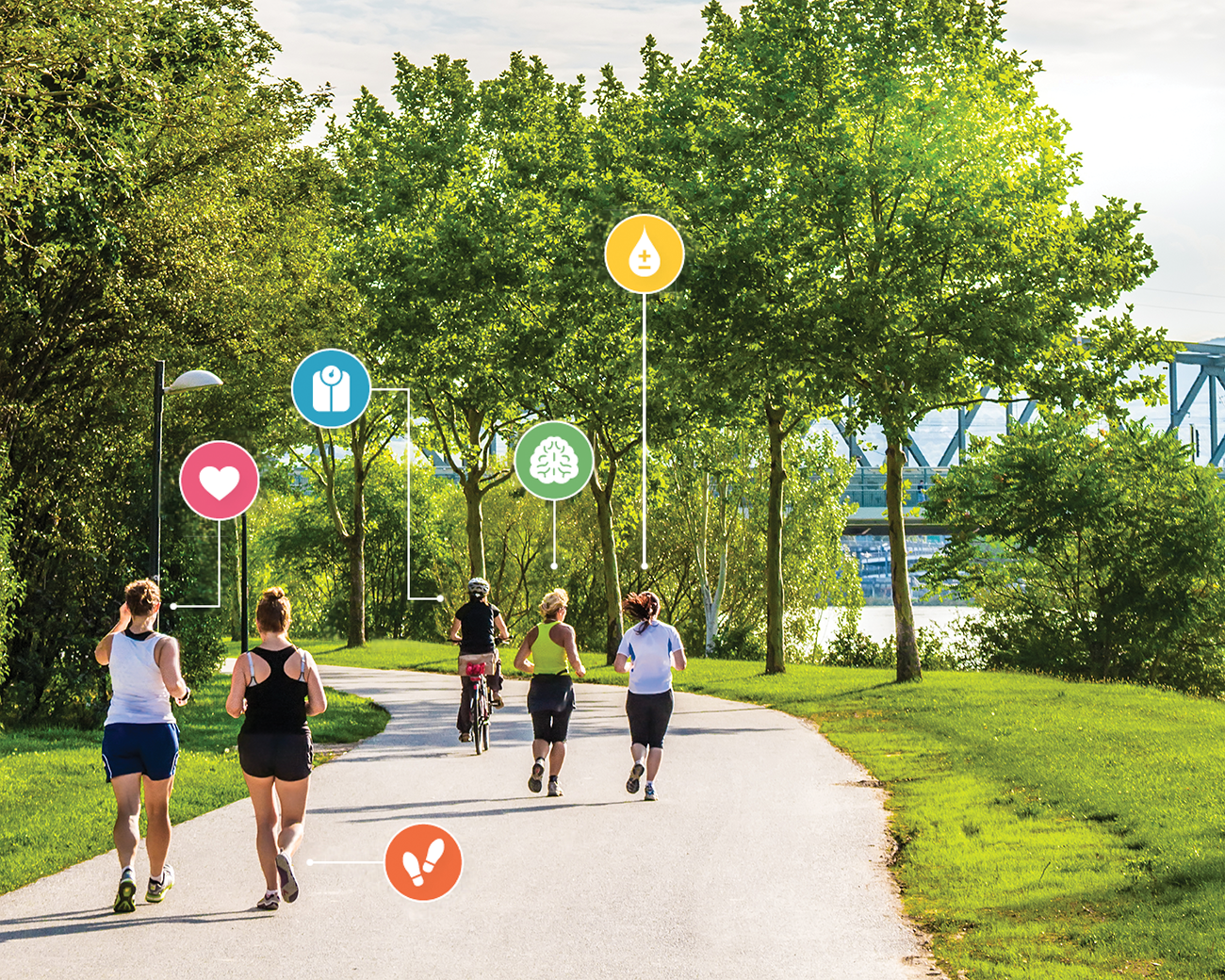 In 2009, MIT graduate student Lawrence David began a project on the human body that required him to track all areas of his health. For over a year, he measured and recorded his diet, heart rate, blood pressure, weight, bowel movements and mood using a customized digital app. “I estimate that self-tracking took about an hour every day,” he says. “Every meal felt like a chore. If I had dessert, I’d have to open the app again. Same goes for every snack. This got old in about a week — by the end of a year, it was deplorable.” Now an assistant professor of biology at Duke University, David says the exercise turned him off health tracking for good.

What David did as part of a research project is becoming a way of life for a lot of us. We now have access to Bluetooth-enabled blood pressure monitors, pacemakers that feed real-time information to cardiologists and smart neuro-stimulators that can be implanted into the brains of epileptics — all devices referred to as internet-connected personal medical devices, or iPMDs. To track everyday health concerns, we can look past Fitbit, Jawbone and even the Apple Watch to a new generation of tools: the Zeo headband (which measures sleep), the HapiFork (which monitors how fast you eat), Ear-O-Smart earrings (which count calories burned) and, in Japan, the Intelligent Toilet, which analyzes urine and sends the results directly to your doctor.

Then there are the apps. You can download everything from mood trackers to sex logs to virtual toothbrushing coaches. A 2012 Pew Research Center survey found that 19 percent of cellphone owners had installed an app to manage their health. Meanwhile, fitness-tracking technology in general is predicted to be worth $5.4 billion USD globally by 2019. These days, taking care of our bodies means monitoring them, a shift that some experts say empowers people to make healthier choices and reduces the country’s health care costs. But the tracking boom also raises questions about privacy, accuracy and the mental health effects of constant monitoring. Is there such a thing as too much information?

While health tracking is nothing new (Benjamin Franklin tracked his sleep and diet on homemade spreadsheets in the 1700s), the fervour with which we currently embrace it is a product of our time, says Deborah Lupton, professor at the News & Media Research Centre at the University of Canberra in Australia. “What’s different now is the huge array of new technologies that can be used to engage in these pursuits.” These technological advances followed the rise of self-improvement culture in the 1970s, itself a product of the waning influence of religion and authority in general. 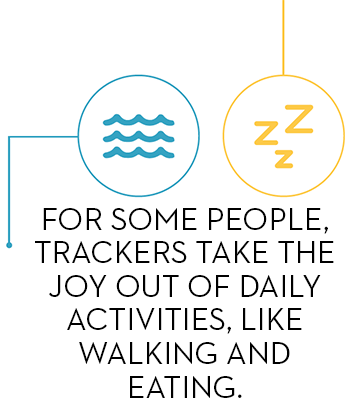 “These days, our destinies are viewed as under our personal control,” Lupton says. “We no longer blame divine intervention or fate if something goes wrong — we blame ourselves.” Tracking our own health data expresses our belief that good health is a matter of individual effort and choice. The irony, Lupton says, is that we start to trust the tracking technology more than we trust ourselves.

From sleep monitors to Fitbits, the invariable selling point of tracking tech is that it’s accurate. “On their own, people don’t really have a good sense of what they’re doing,” says Sacha Chua, co-organizer of the Toronto chapter of Quantified Self, a global network of enthusiasts who believe that tracking different aspects of our lives can help us achieve personal goals. “When you’re trying to lose weight, you might get really discouraged if you gain a few pounds in a short period of time,” she says. “But with a tracker, you can recognize the overall pattern of progress. You might have gained weight last week, but you’re down overall in the past 14 days.” Still, a growing number of experts are pointing out the flaws in many popular health-related apps and devices. For one thing, lack of proper regulation allows faulty tools to reach the public.

In 2011, the U.S. Federal Trade Commission (FTC) fined the makers of a cellphone app that claimed to cure acne via the phone’s flashlight. A survey following the lawsuit found that therapeutic apps (those that claim to treat or cure a health condition) made up more than one-fifth of all available health apps. “The trouble is that there are far too many apps, and too many claims of therapeutic value, for regulators to police,” says Joseph Cafazzo, lead at the Centre for Global eHealth Innovation at the University Health Network in Toronto.

In Canada, there are regulations under the Food and Drugs Act that ensure the accuracy of Class II devices, including tools that help people manage a clinical illness (smart glucose monitors, for example). But trackers that address weight loss, as well as general health and wellness tools (like calorie counters and sleep monitors), are not subject to Health Canada’s scrutiny. “They’re not regulated, in the same way that a scale is not regulated,” Cafazzo says.

Even personal tracking tools that provide accurate readings are risky, as the user must still interpret the data. And the more variables you track, the more difficult it can be to get a picture of what the data is actually telling you, Chua says. “Yes, you can get a Wi-Fi-enabled scale that records your weight, and you can get a blood pressure monitor, and you can record your moods in an app — but how do we get those numbers to work together to give an overall picture of health?”

As we track how we eat, sleep and work, there are also concerns about the effect all this monitoring has on our mental health. For Lupton, whether we track — and how — is an expression of our feelings about ourselves. “Many self-trackers talk about wanting to exert control over their bodies,” she says. “They may see themselves as too fat, too greedy or too lazy, and self-tracking offers a solution.” When users are motivated by obsessive thinking, adds Toronto psychotherapist Kimberly Moffit, tracking can have a negative psychological effect. “It can lead to preoccupation and even anxiety about health,” she says. “If you’re the type of person who feels a compulsive need to document, check and count, tracking technology will only feed that obsession.”

The process can eventually overwhelm daily life, making the user more aware of the tracking device than the activity it’s measuring. “Some people allow the tracker to take the joy out of daily life activities, such as walking and eating,” says Moffit. The result is that tracking disrupts the process of “mindfulness” that helps us enjoy — and reap the benefits of — normal healthy activities.

There are also times when too much tracking simply turns people off trying to be healthy. A 2014 study in the Journal of Medical Internet Research found that fitness apps that included game-like functions (rewards, badges and leaderboards) may actually be demotivating for users in the long run: By making fitness a game, the apps don’t teach people the skills they need to stick to an exercise program on their own. In a 2013 article for Slate, obesity researcher Rebecca Puhl warned that food tracking can lead obese patients to a negative self-image — a defeated state of mind that actually discourages them from losing weight. And then there’s “tracking fatigue,” when trackers become so exhausted by the tracking process that they give up monitoring their health altogether.

Perhaps the most extreme and contentious issue in all this tracking is the question of privacy. A report released in January by the FTC on the Internet of Things — a broad category that includes health-tracking devices — identified iPMDs as a security risk. In the same way that hackers can access and tamper with government or bank websites, they can remotely interfere with connected medical devices: disable a pacemaker, for example, or configure an insulin pump to dispense a lethal amount of medication to the user. If these scenarios sound far-fetched (a hacked pacemaker was a plot line on Showtime’s Homeland), consider this: Former U.S. vice-president Dick Cheney had his implanted defibrillator’s wireless communicator disabled out of concern it might make him vulnerable to attack. And at a 2011 hackers’ conference in Miami, a presenter demonstrated how he could successfully hack and reconfigure the latest model of connected insulin pump at 300 feet — without even knowing the device’s serial number.

For the average app or Fitbit user, the risk of intimate health data being shared or hacked is small, and overall security is improving. “There are regulations at both the federal and provincial levels that protect Canadians’ health information,” Cafazzo says, adding that under Apple’s latest framework, personal health information recorded on apps will be shared only with health care partners, not with Apple. But as health tracking becomes easier and more ingrained in popular culture, it’s also likely that users will face increased pressure to share their health information with third parties — a process Lupton calls “function creep.”

“We may find ourselves required to self-track for a range of purposes that go beyond individual choice,” she says. “Some workers are already required to use monitoring devices as part of their working conditions.” Last year, for example, a London-based analytics firm implemented a mandatory health and fitness digital-tracking program for all its employees. “Some types of insurance, including health, life and car, are moving toward requiring customers to use self-tracking and to share their data as part of calculating their premiums,” Lupton adds. There’s a financial motive here: By helping users change modifiable risk factors for disease, personal-health technology can reduce health care costs by the billions. However, as employers become aware of the benefits of health tracking, it raises the possibility of health-based discrimination in the workplace: practices such as employers raising premiums for workers who refuse to participate in tracking programs or fail to achieve a weight-loss goal.

Despite the potential pitfalls of health tracking, it’s clear that it’s not a passing fad. As technology and marketing get even more refined, trackers are likely to become more integrated in our lives — and our bodies. “The trend is that trackers are becoming more of a background activity,” says Richard MacManus, author of Trackers: How Technology Is Helping Us Monitor and Improve Our Health. “So you won’t have to clip on a Fitbit to track your activity because your activity will be automatically tracked by a smart watch or smart clothing. The Apple Watch, which is designed to be worn all day and every day, is just the latest iteration of this.” The logical next step, MacManus says, is implants. Academics studying health tracking are already calling this tech-body fusion the “cyborg self.”

It is becoming increasingly important for us to stay aware of how tracking and health technology affect us, says Moffit, and to use common sense. “I think people are showing a renewed interest in their health and wellness as a result of tracking,” she says. “It’s a wonderful step in the right direction.” Still, Moffit adds, “what’s right for one person may not be right for another, so it’s a good idea to chat with your health care provider to ensure the program you’re using is right for you. Health starts in our everyday lives and should be preventive — not reactive.”

Related:
Can the Apple Watch make you healthier?
Should you buy a heart rate monitor?
20 weird, wacky and wonderful health innovations