The best city trails in Canada

Go beyond your block with our top five winter walks 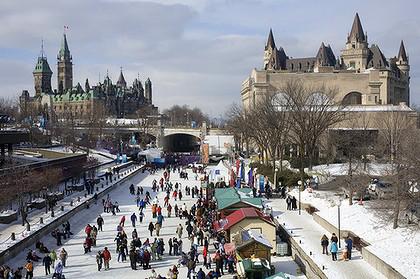 It’s Canadian winter, but that doesn’t mean it’s time to hibernate. Whether you’re hiking or cross-country skiing, you’ll be inspired to get going with our favourite urban trails.

The trails in this 185-acres park take you past half-buried ruins, abandoned quarries and artillery batteries. Matthew Blackett, publisher of Spacing magazine, says, “It’s quite amazing. You walk from the urbanity of the city through this park and it culminates in a roaring ocean lined with cliffs.”

Top trail: Walk the 3.2 km perimeter of the park for views of the ships coming in and out of the Halifax Harbour.

2. Mount Royal, Montreal
This trail-friendly peak occupies 200-hectares and boasts breathtaking views of the city that surround it. On one side, there’s a bustling metropolis and the bridges that link the island to mainland Quebec. On the other, the massive copper dome of Saint Joseph’s Oratory pokes through the trees.

3. The Rideau Canal, Ottawa
Designated a UNESCO world heritage site in 2007, the Rideau Canal in downtown Ottawa turns into Canada’s longest skateway in the winter. If you’re a committed walker, a path on each side lets you partake on solid ground.

4. The Don Valley, Toronto
Minutes from downtown Toronto, this trail is flanked by a highway and a train track. However, the Don River, which runs alongside the path, and regular fox and deer sightings give the feel of wilderness within the hustle and bustle of the city.

Top trail: Start at Riverdale Farm and head north to the Evergreen Brick Works environmental centre for a 3.5 km walk.

5. The Seawall, Vancouver
The Seawall, a winding 22 km walkway, lines Vancouver’s waterfront. Take in vistas of the mountains and the downtown skyline as you trace along the Pacific Ocean. Bartlett says the Seawall is one of Canada’s most treasured trails. “You get to see the beach and the city at once, he says.

Top trail: At 8.8 km, the Stanley Park section starts just north of Coal Harbour and takes you around the northern edge of the park.