Should you weigh yourself?

Despite what you may have read, the scale is not your friend when you're trying to get fit. Find out which numbers really matter 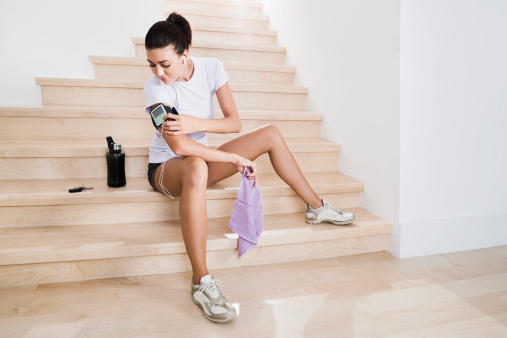 There is a scale in our bathroom, but I never step on it. I have transcended its existence.

My wife hops on the scale on rare occasions, simply out of a sense of curiosity, but she also wouldn’t mind if we just got rid of it. The only reason we keep it around is because we have children who are curious about how much weight they are gaining as they grow.

Barbara Rolls is a professor of nutrition at Penn State University and in this article she explained that, “Several well-controlled studies found that daily weighing helps with both weight loss and the prevention of weight gain.” I admire Rolls’ approach to focusing on eating low-caloric density foods, but I think she’s missing the bigger picture on the issue.

The first problem: The scale lies

Rolls advises weighing yourself first thing in the morning, naked, after going to the bathroom. The idea is to create the same circumstances during each weigh-in to minimize the effect of daily fluctuations in body weight. The problem is, even following that advice isn’t going to control for other variables such as gaining muscle, and water retention from factors like high carbohydrate and/or sodium intake.

Think of this: you’re feeling like you’re doing well. You look better and feel better about the progress you’ve made about getting in shape. Then you step on the scale and because of some muscle gains and/or water retention, you realize you’ve gained a couple of pounds. What does that do to your motivation?

Back in 2004 I was in charge of a fitness challenge for two students, Rory and Audrey, at the University of Calgary. We put them through an intense five-month diet and exercise program. They both had amazing before and after photos, and were both far stronger, more muscular, and fitter by the end of the program. Audrey lost a total of just six pounds in those five months, and she looked amazing. Rory, well, he gained a pound. The guy lost a lot of flab, but gained it all back, and then some, in muscle.

In other words, the scale did nothing to reflect their true accomplishments.

The second problem: Body weight is a poor indicator of health

If a person is morbidly obese according to body mass index, they could suffer myriad health problems. However, simply being in the “overweight” range is not much cause for concern. A recent study out of the University of Manitoba states, “Overweight people did not have a huge increase in health problems or premature death.”

An overweight person who exercises, eats a healthy diet, and keeps their stress levels moderate is going to be a lot healthier than a sedentary person in the normal BMI range who eats crap. Period.

But weighing worked. Why?

Participants in the studies Rolls quoted were taught to take action when the scale said they were regaining weight. In other words, they were keeping their brains focused on lifestyle changes to keep that scale number where they wanted it.

Improving your health, fitness, and body composition requires continual dedication to behavior change. To accomplish this, tracking numbers is good, but stepping on a scale tracks the wrong numbers.

What you should be focusing on, long-term

As I’ve pointed out before, the number on the scale is not worth thinking about. Here are better outcomes to work towards

What you should be focusing on, short-term

To reach the above-mentioned outcomes, you must go through a process. These processes become behaviours. Permanent lifestyle change is all about adopting and sticking with certain behaviours, and stepping on a scale everyday is not a worthwhile behaviour.

I’m a big fan of tracking. It’s a proven method for both exercise adherence and sticking to dietary changes. Let’s break it down:

A lot of people are against tracking caloric intake, but I consider it the big gun of fat loss (and yes, I know this contradicts what I wrote about ignoring the scale, but let’s admit that you can have losing body fat as a goal and still ignore your scale).

If you absolutely are not achieving your desired changes in body composition, it means you’re still eating too many calories. Keeping a meticulous journal of every last morsel you eat is the ultimate weapon.

It’s also a drag, so I consider it a last resort. Instead, try focusing on reaching these numbers:

Those are good numbers to track. Here are some more.

For exercise, keep track of your numerical accomplishments with some of these examples:

Again, tracking progress and behaviours is a great idea. It will keep you focused and it will result not just in fat loss, but in a whole host of other positive life changes.

So take that scale and bury it under some old clothes in the storage room. A year from now, if you’re curious, you can pull it out and take a look. The scale is not your friend. You must transcend.