Should you exercise when you're sick?

Not sure if you should hit the gym when you're feeling under the weather? Find out when it's okay to keep up your routine, and when you should stay home and rest. 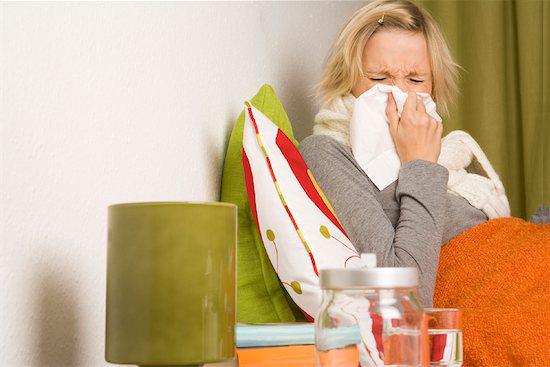 I really hate it when sickness derails my exercise regime, so I have a tendency to slightly push the limits of what I should and should not do. I’ve also got a wife who is a family physician and two young children in school — the three of them tend to bring home every communicable disease known to humankind on a regular basis. I don’t like to let such things slow me down. Sometimes, I catch these diseases, and if I can, I still work out.

I remember when one of the most horrific sicknesses ever struck me in early 2006. There were the typically nasty influenza symptoms that you’d rather not read about, but there was also the cough from hell.

You know how when you get a bad cough, it’s always the last thing to go away? Well, the only thing that kept me sane (and not thinking that I’d contracted lung cancer) with this cough was the fact that everyone else had the same thing. I’m sure if Facebook had been popular back then, everyone’s status updates would have read: “Ack! This cough is killing me! When will it die? Lolz!”

That cough made it so I couldn’t work out for three weeks. A lesser mortal — or perhaps a saner one — would have taken more time off. However, after three weeks of not exercising I simply couldn’t take it anymore, so I went to the gym to lift weights.

But running was still out. That cough kept me from running for six full weeks. I hate coughs.

So, if you get sick, how do you know if you can still exercise? Well, I asked my wife — a doctor — what her opinion was, and she said, “If you feel like death, don’t exercise.”

Not exactly scientific, but good advice nonetheless. I should note that I’ve witnessed her head off to karate class with complaints of a sore throat and impending sickness. She hates missing workouts almost as much as I do.

The neck check
So, is there any better advice beyond the not-feeling-like-death recommendation?

Yes, there is, and it’s called the neck check.

Basically, the rule is that if all your symptoms are above the neck — meaning you can have a headache, sore throat, and be plowing through lotion-impregnated Kleenex like there is no tomorrow — you’re still good to go. One caveat is that you shouldn’t go too hard, but I’m guessing you’ll probably restrain your intensity without even thinking about it.

One note about the neck check is that fevers are exempt. If you are running a temperature, then don’t exercise.

Below the neck symptoms are a signal that you should take a break from exercise. You probably won’t need too much convincing on this, because when you’ve got things like a terrible cough, chills and body aches, going for a workout is one of the last things you want to do. At that point your idea of exercise is stirring the glass of water with the NeoCitran in it.

Exercising with a cough
But what about one of those lingering coughs?

Well, there isn’t really any data on that, but it does seem that when you get one — and a bunch of other nasty flu symptoms to boot — the cough sticks around long after the fevers, chills, and general “hit by a truck” feelings are gone. Do you really need to wait until all coughing ceases before getting back to exercise?

This article isn’t intended as a substitute for medical advice, but sometimes those coughs can stick around for an awfully long time after all other symptoms are gone. So, I think it’s okay to experiment with a return to exercise if you’ve still got the lingering cough, but just take it easy and work your way back in. If you feel like you’re about to cough up your large intestine from the effort, then you’re probably going too hard.

One last thing is that being a regular exerciser can prevent you from getting sick in the first place. We’re not quite sure how, but there are some theories:

In short, if you feel like you can exercise, then do.